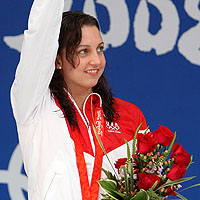 Soni revels in her victory.

USC senior Rebecca Soni pulled off one of the biggest upsets thus far in the National Aquatics Center at the 2008 Beijing Olympics, dethroning 200-meter breaststroke world record holder Australian Leisel Jones by shattering the world standard and capturing the gold medal in China.

Soni, who finished second to Jones in the 100m breaststroke earlier this week to earn her first career Olympic medal, trailed Jones after 50 and 100 meters. But known for her prowess in the back half of her races, Soni overtook Jones after 150 meters by one one-hundredth of a second and then crushed the field over the final 50 meters to win in 2:20.22.

Soni, who set the American and Olympic record during prelims, was the top seed entering the final, but still was considered the underdog to the veteran Jones.

Jones, however, could not match Soni’s pace during the final lap and settled for silver in 2:22.05. Sara Nordenstam of Norway earned the bronze in 2:23.02.

The last USC women’s swimmer to win an individual gold medal was Canadian Anne Ottenbrite, who coincidentally won the 200m breaststroke at the 1984 Olympics in Los Angeles. She won that event in USC’s McDonald’s Swim Stadium, the same pool Soni has trained in for the past three years.

“The hard work, commitment and dedication she demonstrates every day in training prepared her for the win and the world record,” said head coach Dave Salo. “It was awesome to see Rebecca have a big smile on her face as she experienced the dream becoming reality. Wow!”

The last Trojan men’s swimmer to win an individual gold was Lenny Krayzelburg, who won both the 100m and 200m backstroke in 2000.

Soni’s schedule is not done in Beijing. She will swim the breaststroke leg for the United States in the 4x100m medley relay.