When Anne DeSalvo, an instructor in the USC School of Cinematic Arts, got the call to go to Saudi Arabia to teach acting, she was a bit surprised. DeSalvo, who has performed in TV and film, knew about the country’s history of media censorship.

It recently lifted its ban on movie theaters, which had been outlawed since the early ’80s. Much of film and TV there is consumed through DVDs or streaming.

DeSalvo was invited by the Saudi government to host a four-day workshop, which would go over everything from improvisation to acting out scenes and included a screening of The King’s Speech. It was part of an arts and cultural festival called Colors of Saudi, hosted by its tourism bureau.

It was her first trip to the country and felt like an opportunity to learn more about a nation sometimes closed off from the west and for her to share her experience as a performer. DeSalvo has performed on Broadway and starred in TV shows and films, such as Entourage, Monk and the 1980 Woody Allen picture Stardust Memories.

The country’s entertainment industry is still heavily censored and small, and most of DeSalvo’s students there — professionals in their 20s and 30s — weren’t planning to be professional actors or producers. Still, she said the students were some of the most enthusiastic she’s ever taught.

No one ever missed a class. Everybody was so into it and laughing and enjoying themselves.

“No one ever missed a class,” she said. “Everybody was so into it and laughing and enjoying themselves.”

The December workshop had 19 men and a few women, a less diverse group than she had hoped for but still a sign of progress for a country that’s slowly increasing the rights of its women. Last year, the nation lifted its ban on women driving and in recent years has seen women take on roles in law.

But progress is slow-moving. While the majority of its university students are women, they only make up about 17 percent of the country’s workforce, according to 2016 statistics from the International Labour Organization. For the most part, women can only work among other women and must have a guardian’s consent. Until last year, women weren’t allowed to attend sporting events at stadiums; now they can, but with segregated seating. 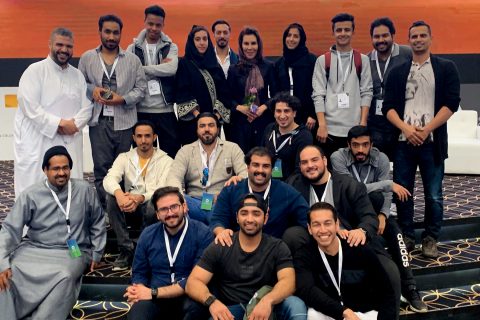 DeSalvo had to work around the strict traditions of the Islamic country, such as women not touching men outside their family. At first, she thought this would make scenes — such as between lovers or partners — difficult. But she found scenes where emotion was more nuanced.

Two days of acting classes were followed by two days of filming, where students got the feeling of being part of a production.

Although she was only there for eight days, she said it gave her a small glimpse into a country that’s generally in the headlines due to conflict or controversy. She went shortly after the murder of journalist Jamal Khashoggi, which the Saudi government allegedly orchestrated.

“I had never been around people who were so generous charming and educated,” she said. “[I told someone] my experience of the Saudi people was so different than what I perceived coming here. He said, ‘We hear this a lot.’”

Jay Wang, director of the Center of Public Diplomacy at the USC Annenberg School of Communication and Journalism, said trips like this are dubbed “arts diplomacy” in his world — an opportunity for a nation-to-nation exchange at a micro level.

The arts as a form of communication is more capable of revealing emotional truths about us as human beings.

“The arts as a form of communication is more capable of revealing emotional truths about us as human beings,” he said of opportunities like the acting workshop. “It doesn’t matter what culture you live in.”

It also allows us to connect in a way that’s tangential to larger conversations happening perhaps at the state department level. There are other examples of this, like when famous musicians visit countries, called music diplomacy, prompting international conversations.

“This type of narrative medium allows us to develop empathy,” he said.

When it comes to do’s and don’ts of the cultural exchange, he says that both go in with a set of preconceived notions. The important thing is awareness.

“We always bring our own cultural biases. The beautiful thing with art is it probably makes them more aware of that,” he said. “We can see other cultures and other places both in our own light but also through their lenses.”

In fact, research shows that getting to know someone unlike you — dubbed “contact theory” — increases your awareness and understanding of another culture or background, he said.

That can be through high school or university exchanges, job placements or contact with the arts, he said.

DeSalvo is now itching to go back.

American allies breathe a sigh of relief after the midterm elections

Foreign governments “were relieved at the election results, but they’re not sure if Congress will get anything done,” says former U.S. Rep. Jane Harman, USC Price’s Presidential Scholar-in-Residence.

Noel Nichols brings talent, experience and passion for teaching — and, as a gender-fluid person, representation — to new role as assistant professor in the USC School of Dramatic Arts.