After poking at the keys of his small black laptop for about 12 minutes, Mike, in a denim jacket and black framed glasses, volunteered to share some of his writing. It’s for a workshop he’s in with USC students and instructors.

He peered down at his screen as he read aloud a story about a past love named Vicky and dates at the drive-in in her dad’s station wagon.

“Guess we always knew it wouldn’t last forever but, then again, how some nights I wonder how far off she may be,” he said, a slight crack in his voice. “A tune from the late ’60s come to mind and I’m transported to the happiness and the warmth — far more enduring than when the lightning first struck.”

Mike, with a head of gray hair, didn’t give his age but you can do the math. Mike got out of prison in November; he went away nearly 36 years ago at the age of 31. It was his last of four stints in prison. He’s served a total of 45 years over the course his life. 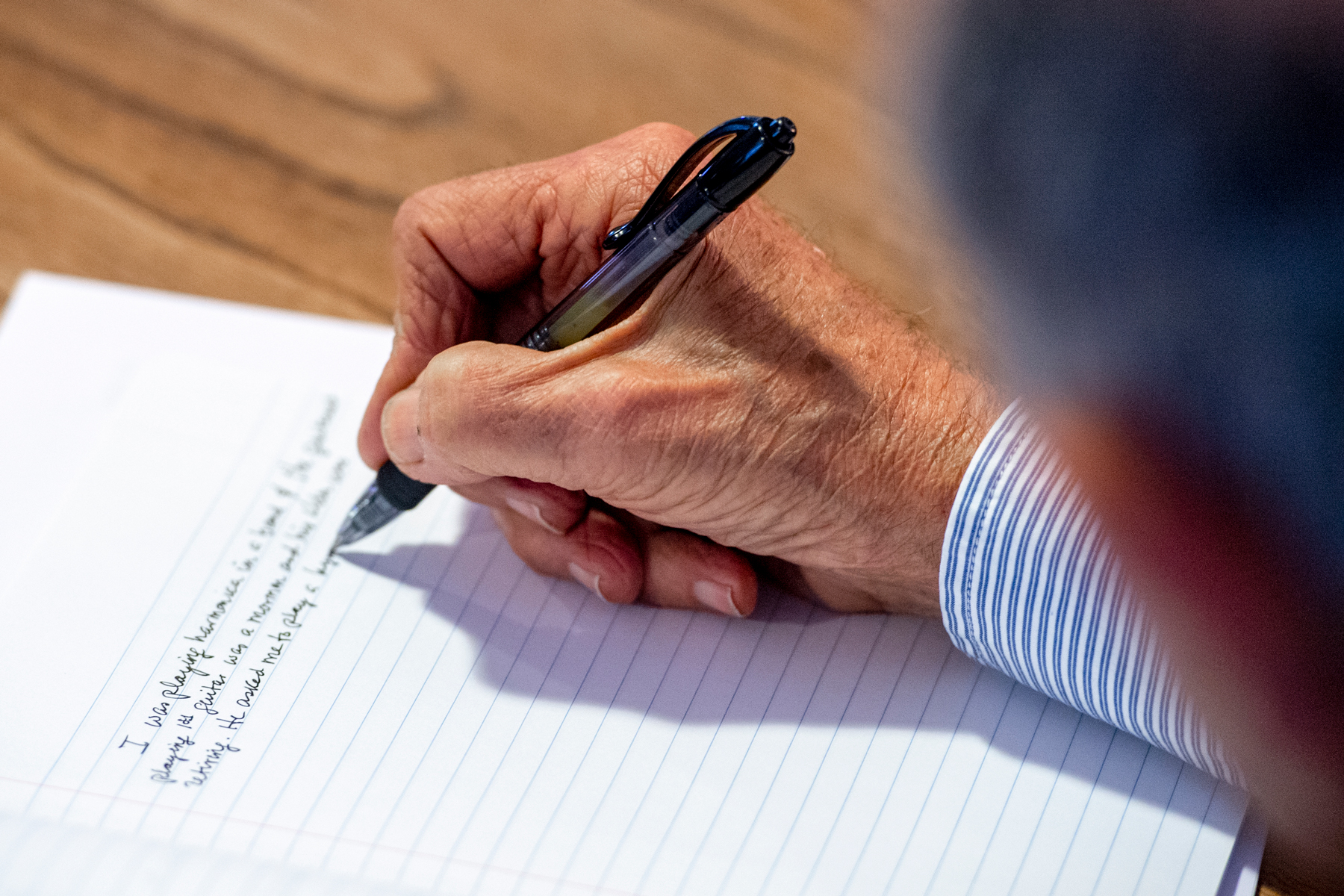 Working with Francisco Homes residents allows USC students to get a firsthand look at societal issues and myths about the criminal justice system. (USC Photo/Gus Ruelas)

Now, several months out, he spends his Thursday nights writing with help from USC students, instructors and his fellow Francisco Homes residents.

Francisco Homes is a nonprofit that offers housing and support to help formerly incarcerated individuals transitioning back into society. The group from USC has been coming to the house — an old Craftsman less than a mile from USC — for about two years. The students get to connect with a different population; the men get to try their hand at creative writing.

The course is Writing 150 — “Writing and Critical Reasoning: Thematic Approaches,” required of all USC freshmen regardless of major — but instructors Emily Artiano and Ben Pack decided to put a new spin on it: community engagement. For this iteration of the course, students pick among a few local organizations to partner with, touching on everything from education inequity to homelessness, to dispel assumptions and to think critically when writing about societal issues. Francisco Homes has been a partner for a couple of years now, giving students insight into the criminal justice system.

Its homes are made entirely of men, the vast majority of whom are former lifers. Although this Thursday night they didn’t go into the specifics of their crimes, it’s safe to say that life sentences are invoked for serious offenses.

Up until recently, none of these men were expected to see the light of day, but in recent years, former Gov. Jerry Brown allowed the release of hundreds of prisoners with long sentences on parole with a renewed focus on rehabilitation. The residents usually stay at Francisco Homes for a minimum of six months; many stay longer.

This Thursday night five residents participated, including Ed, Mo, Gary and Doc (Francisco Homes asked USC to only use first names to protect residents as they attempt to rebuild their lives).

Four USC students were there, too, working on their own writing beside them.

After Mike shared his story about Vicky, Artiano and Pack chimed in with some notes. 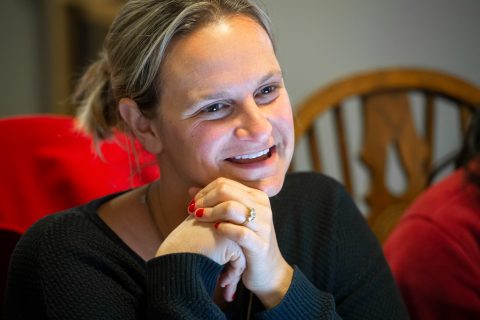 “I love the way that you said that,” Artiano said, who has a PhD in early American literature. “That’s such a nice way of saying sometimes our memories can be stronger and more powerful than our feelings in [the actual] moment.”

Mike plans to keep working on the piece and submit it to the Francisco Homes newsletter, which the class is helping them put together. The first edition will be out early March and will feature essays about reintegrating with society, along with creative writing.

For many of the men, the workshop has ignited creativity that felt dormant for so long.

“I look forward to it everyday,” Ed, 76, said of writing. He’s been at Francisco Homes since he got out nearly two years ago. He was in prison for 37 years; now he’s the house manager.

But, he admitted, when the classes first started at the house, he avoided them. He didn’t want to do it, he said. He felt dumb.

“It got so unbearable, I hid,” he said, with a laugh. At first, he hid in his room and then in his car down the street.

And that felt good, he said. He used to get stage fright talking in front of groups; now he doesn’t.

For many, it’s also a chance to socialize and learn new things, like how to use Google docs, where the group shares their work. Many went away in the 1970s and 1980s, before smartphones and laptops were ubiquitous.

The class has made an impact on the students, too, challenging their assumptions about people who have served in prison.

“I never had this interaction with this group of people before,” said 19-year-old Oussa Bun, who took the class in the fall and wrote a report on voting rights for citizens with felony convictions. “All I knew was what people told me and from movies and TV shows.

Bun changed his major because of his time with the men of Francisco Homes, who taught him the preciousness of time.

Seeing them do what they love — pursuing art— made me rethink what my passion is and what I want to do.

“Seeing them do what they love — pursuing art — made me rethink what my passion is and what I want to do,” he said, switching from civil engineering to photography.

But back to Thursday. After Mike and the other residents shared what they wrote during that 12-minute freewrite, USC students shared.

Xiomara Neri Hidalgo, a math major, wrote a story about the time she didn’t have enough money to buy her mother a birthday gift so she made one — a shadow box frame full of old photos from her mom’s life, decorated with hand-cut paper and flowers.

It was her first time sharing in the workshop, and the residents offered her some feedback.

“That’s a beautiful effort you put into it,” said Doc, an older man who carries a harmonica in his pocket.

“It would be a better world if that were the news rather than Trump’s tweets,” Mike said, the group laughing. “It made my day really.”

No grades during USC writing course for former inmates

While the course is intended to allow them to do more informed research for their class papers, none of the writing done in the Thursday night workshops is graded or turned in. Just like the residents, the work the students share is often personal. It’s an opportunity for both groups to be vulnerable.

“If they’re going to write about incarceration or criminal justice, we believe they should talk to people affected by those issues,” Pack said. “But it’s also lovely to see them write about their cats or their friends or high school experiences because we don’t necessarily see that work in the course.” It’s a special relationship to get to hear work written without “the stakes of a grade,” he added.

The class sticks with students after the semester is over. Bun and former classmate Sabrina Panfil want to continue volunteering with Francisco Homes. Maybe take some of the guys to the beach when it warms up, they said. Many haven’t been in decades.

Team including USC law students and legal experts educates and counsels life-term youth offenders about new laws that could mean a second chance.

USC research fellow works with award-winning photographer on project they hope can kick off a conversation on how society views justice.

Eight men mark a milestone — the publishing of their work crafted with help from mentors at USC’s Writing Program.