As graduation nears and college students step up their job search, many rely on their parents for guidance and support.

But first-generation college students may be at a disadvantage. Their parents often lack experience with campus recruiters and might not have a professional network that can help the students land their first job.

To fill that gap, USC pairs these students with first-gen alumni who share professional development and career advice through the First-Generation Mentor Program. Mentors offer practical ideas on topics like networking and finding internships.

“This first-gen program offers ways for these students to be able to succeed, even though they might not have the same resources and tools and background as other students on campus,” said Michael Okamura, who earned his business administration degree from USC in 1983 and has served as a mentor for nearly a decade. “They also have to make a determined effort to succeed, despite the obstacles.” 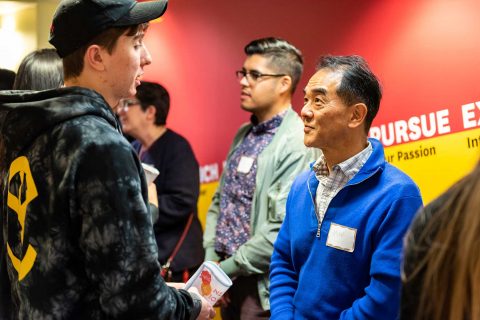 Student participants commit to the program for one year. They attend monthly workshops on topics ranging from polishing their cover letters to practicing their 30-second elevator pitch as a job candidate. They also meet one-on-one with their mentors to ask career-related questions or talk through personal issues.

That’s why Benton Yee signed up for the program. As the son of Chinese immigrants, the USC sophomore worried that he might fall behind his classmates in landing internships and setting up a successful career path.

“I always saw other students as one step ahead of me, having that resource of their parents who can guide them,” he said. “Because of this mentorship program, I feel like I’ve gained the confidence to step out of my shell, be prouder of my identity as a first-generation student and keep on pushing myself.”

Mentorship program among many resources for first-gen USC students

Now in its 10th year, the USC Career Center program is open to first-gen undergraduate students from all academic majors who have completed at least a semester of college classes. One in five undergrads at USC has parents who never graduated from college. The mentorship program is only one aspect of specialized support the university provides to these students; other resources include a student summit and new workshops for incoming students.

Despite these tailored services and general career guidance available at USC, many first-gen students are unaware they have access to help with professional development, said Gina Ibrahim, who oversees the mentorship program as the career center’s internship and diversity programs advisor. It’s something she experienced herself as a first-gen psychology major at USC.

It makes me extremely proud to see that these students are tapping into this mentorship program to get these resources earlier than I did.

“I was that student who didn’t go into the career center until spring semester of my senior year, because I didn’t even know it was a thing,” she said. “It makes me extremely proud to see that these students are tapping into this mentorship program to get these resources earlier than I did.”

She is a big part of its continued success. Many participants said they first heard of the initiative from Ibrahim, who finished her USC degree in 2015 and completed a master’s in higher education management and student services at University of Pittsburgh. She said it’s gratifying to return to her alma mater to help others struggling with the same issues she faced.

“As a staff member, I’m so much more well-versed in the way the university works, all the different resources available in the academic colleges,” she said. “Now when a student comes to me saying, ‘I’m having this issue,’ I can point them in the right direction.”

Yee is one of those students who received an email from Ibrahim promoting the mentorship program. He had benefited from similar support for low-income and first-gen students while growing up in San Francisco, so he jumped at the opportunity.

Mentees and mentors are matched based on their career interests if possible. Yee, a business major who is minoring in game entrepreneurism, was paired with Okamura, who has decades of experience in the business sector, primarily in international finance. Yee said he appreciates Okamura’s suggestions about his career materials and tips on how to be confident and make a good impression during interviews.

“He’s also been very supportive, checking in and asking how school is going, making sure I’m taking time for myself,” Yee said. “I’ve been feeling a little burnt out lately, trying to apply for so many internships and programs, so we’re going to dinner to talk about that experience.”

Okamura said the personal component of the mentor relationship is just as critical as providing career advice.

“I give these students a lot of credit for staying focused,” he said. “There’s so much pressure on them, stress and distractions that can get them off the road to success in school and career and life. They have so many resources on campus they can tap into, they just need to know where to turn.”

Other participants have developed close ties over shared experiences, like recent graduate Cindy Le and her mentee, Linh Duong. Both focus on business administration and are Vietnamese-American. Their respective parents, all immigrants from Vietnam, expected them to succeed academically, but had no prior experiences or insights to help with the transition to college. 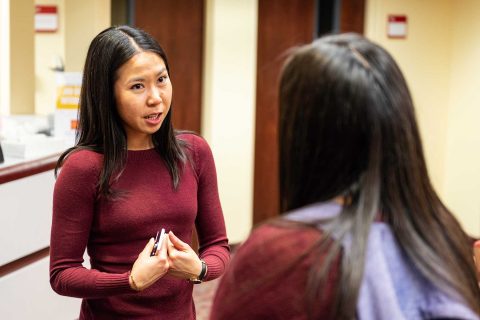 Le recalls struggling during her first year at USC. From move-in day, she said it felt like she didn’t quite speak the same language as most of her classmates, despite being fluent in both English and Vietnamese.

“It was very nerve wracking for me,” she said. “It would have been nice to have a community of other students and a mentor who had already been through that experience.”

Le eventually found support through a student group for Asian Americans and a mentoring program at the USC Marshall School of Business. She finished her degree in 2015 and now works in corporate social responsibility for a global law firm, in addition to serving on the board of the USC Asian Pacific Alumni Association and chairing its Young Alumni Council. Determined to help other first-gen Trojans, she got involved with the mentorship program in 2017.

“I don’t see it purely as being a career mentor,” Le said. “Our shared first-gen identity serves as a connection point that can open up candid dialogues, allowing the mentor-mentee relationship to go beyond academic and career advice.”

Career advice is only one aspect of first-gen mentorship initiative

Duong appreciates that personal touch. She grew up in nearby Arcadia and attended a competitive high school. Her parents, who immigrated to the United States when she was 3 years old, expected her to do well in school but spoke little English. So when it came time to apply to college, Duong had to navigate the process alone. 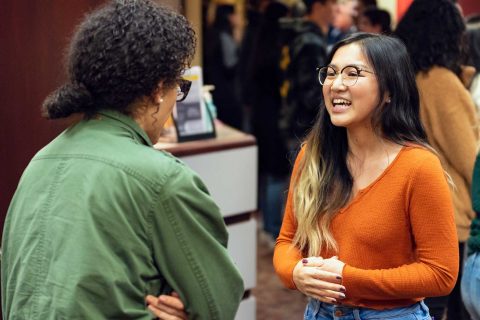 First-gen students like Linh Duong often have additional stresses of balancing family needs and education, which her mentor has helped her navigate. (USC Photo/Eric Lindberg)

“I didn’t know what I needed to put in my essays or how to figure out financial aid,” she said. “There was nobody to vent to about the stress.”

She faced more anxiety when transferring from UC Riverside to USC last year, especially when trying to transfer her course credits and ensure she would graduate on time. Her parents began dealing with health issues in recent years, adding to her worries. Le stepped in to provide support, even offering to translate for her parents during doctor visits.

“I haven’t taken her up on that yet, but to know someone is there to help me if I ever need it is really comforting,” Duong said. “It just puts me at ease, like a weight has been pulled off me.”

Le is also helping her get ready for life after USC. Duong has a part-time job at the headquarters of a major restaurant chain, and she hopes to transition to a full-time position in the marketing department after graduating this spring. Le helped her refine her resume and prep for an interview with the vice president of marketing.

The opportunity to receive practical career support through the First-Generation Mentor Program appealed to Alfonso Rojas, a sophomore majoring in computer engineering and computer science who grew up in San Jose. His parents and older siblings finished high school, but they didn’t attend college. He felt anxious about starting his hunt for summer internships. 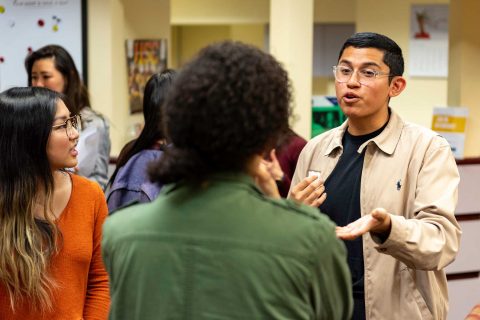 USC junior Alfonso Rojas says that the First-Generation Mentor Program has given him more confidence and practice when it comes to pitching himself and his work. (USC Photo/Eric Lindberg)

“I was looking for someone I could email and talk with, have them review my resume and give me a few talking points for interviews,” he said. “I don’t have much practice or anyone back home who can help me with stuff like that.”

During a recent meetup with his mentor, Rojas received feedback on his elevator pitch, including tips to ensure his dialogue felt natural and not scripted. They also visited the tech firm where his mentor works to help Rojas build connections and practice his networking skills.

Now he feels confident about attending internship and job fairs, handing out resumes and pursuing other career development opportunities. He hopes to land a paid internship in software engineering or web development — especially so he can support his family.

“My parents have sacrificed a lot for me, so I definitely want to give back,” Rojas said. “Even giving just a little bit back to them would feel great.”

Graduating anthropology major discovers a deeper sense of self and purpose

Admission offers are out to almost 8,200 would-be students around the globe.

The national nonprofit’s new Crenshaw center is just 1½ miles from USC’s University Park Campus — and Trojan Olympian Allyson Felix has joined its board to boost participation in the neighborhood where she grew up.