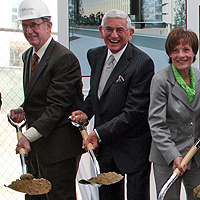 President Steven B. Sample joined Eli and Edythe Broad at the groundbreaking ceremony.

USC is the first of 12 institutions funded by the California Institute for Regenerative Medicine to break ground formally on a facility wholly dedicated to stem cell research.

The $80 million Eli and Edythe Broad CIRM Center for Regenerative Medicine and Stem Cell Research at USC is the product of an innovative public-private partnership between voter-created CIRM, the Keck School of Medicine of USC and the Eli and Edythe Broad Foundation, a Los Angeles-based national philanthropy focused on advancing entrepreneurship for the public good in education, science and the arts.

“We have the best scientists and researchers right here at USC. And with California leading the way in stem cell advances, it’s only logical that we create the institutions and facilities around the campus that are going to continue to accelerate stem cell research here in our back yard,” said Eli Broad, founder of the Broad Foundation.

Carmen A. Puliafito, dean of the Keck School of Medicine, called the groundbreaking “a very important step in a mission set by the voters of California to place the state at the forefront for stem cell research.”

“What USC, Eli and Edythe Broad and the Keck Foundation are doing here is not just important to USC, it’s important to the entire city and the region as well,” said Los Angeles Mayor Antonio Villaraigosa. “Whether it’s the effort to invest in infrastructure or the effort to make L.A. a real center of progress in stem cell research, I want to acknowledge and thank (the Broads) for these efforts.”

The new 80,000-square-foot facility will become an integral part of a “research triangle” on USC’s Health Sciences campus, working with researchers at the Zilkha Neurogenetic Institute and the Harlyne J. Norris Cancer Research Tower.

The California Institute for Regenerative Medicine was established when voters passed Proposition 71 in 2004 to borrow and spend $3 billion over 10 years to support stem cell research. The institute awarded USC nearly $27 million for the new facility earlier this year, supplementing a $30 million gift made in 2006 by the Broad Foundation. The balance of funding will be raised from private philanthropy.

“We are proud to honor Eli and Edythe Broad for their vision and generosity, which paved the way for this extraordinary facility,” Puliafito said. “The facility will be a vital addition to our campus, creating the space for research that holds great promise for advances in patient care.”

The Keck School of Medicine established itself as a leading site for stem cell innovation with the 2006 recruitment of Pera.

An internationally recognized pioneer in the development of embryonic stem cells, Pera has since recruited seven top researchers from around the world who collaborate with USC faculty colleagues at Childrens Hospital Los Angeles and other regional institutions in SC3, the Southern California Stem Cell Scientific Collaboration.

The center will be a regional hub for the collaboration, which also includes City of Hope, the University of California, Santa Barbara, the California Institute of Technology and the House Ear Institute.

“On behalf of the governing board of the California Institute for Regenerative Medicine and on behalf of all of the patient families of California, I commend UCS’s leadership in creating a world-class stem cell research institute, which will be an asset globally in driving stem cell research and therapy development forward to the clinic,” Klein said. “USC’s leadership represents a model for the nation and the world on mobilizing private-sector donations and institutional commitments to this tremendous new frontier of scientific and medical research.”

To date, USC researchers working on the Health Sciences campus and at Childrens Hospital Los Angeles have received $60 million in stem cell grants from the California Institute for Regenerative Medicine. USC ranks third in the state in such funding, following Stanford University and the University of California, San Francisco.

“The center will provide researchers with outstanding space and facilities for state-of-the-art research aimed at the treatment of a vast spectrum of diseases,” Pera said. “The potential applications for stem cell research and regenerative medicine are breathtaking. This new building will enable USC researchers and their colleagues to convert exciting fundamental discoveries into new therapies.”