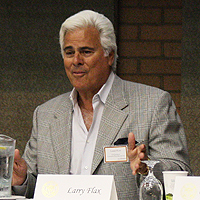 Hailed as the USC Alumni Association’s most ambitious and encompassing Alumni Leadership Conference to date, the three-day, mid-September forum brought approximately 300 alumni leaders from around the world to the University Park campus.

For the first time in its seven-year history, in addition to members of regional alumni clubs, alumnae groups, multicultural organizations and the Alumni Association board of governors, the annual event welcomed representatives from the alumni associations of USC’s various schools as well as volunteers from USC Athletics support groups.

In his welcome to participants, USC Alumni Association president Richard A. DeBeikes, Jr. ’78 reminded them that “the success of all of the university’s alumni relations efforts depends on robust and effective partnerships between USC and its volunteers.”

Given the conference start date of Sept. 11, DeBeikes paused during his speech for a moment of silence in remembrance of 9/11. Afterward, some volunteers joined small discussion groups germane to their particular leadership interests, while others donned cardinal-colored hardhats for a sneak-preview tour of the new School of Cinematic Arts building still under construction.

The afternoon highlight was “Lessons in Leadership,” a panel discussion moderated by Frank Buckley ’87, Emmy-winning co-anchor of the KTLA Morning News.

Escutia related how she and Gov. Arnold Schwarzenegger put aside political differences to work together effectively based on a “mutual frankness,” and all four panelists agreed that, in the long run, failure can be just as valuable to a leader as success.

Day one culminated for many of the volunteers at The Grove in Los Angeles, where the association, along with Caruso Affiliated, co-sponsored a pep rally for the USC football team preparing for its Sept. 13 showdown against Ohio State.

Friday � day two � began at a Davidson Conference Center breakfast addressed by USC President Steven B. Sample, who likened alumni leadership to a symphony orchestra: “No matter how talented or accomplished any of (the individual) sections may be … you need to have everyone on the same page … playing together in harmony.”

In the afternoon, a second panel � “Best of USC” � highlighted some university faculty stars: Brent Blair, a senior lecturer at the USC School of Theatre who trained therapists in techniques of applied theatre arts to work with Rwandan genocide survivors; Elizabeth Currid, assistant professor at the USC School of Policy, Planning, and Development, whose book The Warhol Economy examines why artists tend to work in big cities they can scarcely afford to live in; Maja Mataric, senior associate dean for research at the USC Viterbi School of Engineering, who also co-directs the USC Robotics Research Lab; and Geoff Wiseman, director of the USC Center on Public Diplomacy, who focused on the university’s critical commitment to fostering careers in public diplomacy.

Joining them was USC student Clare Doody, who spoke about finding her academic niche as an American studies major.

Many who attended the conference stayed through Saturday to attend the association’s first home game tailgate, held near the Widney Alumni House. From there it was on to the Coliseum to watch the Trojans trounce the Buckeyes 45-3.

As many an alumni will attest, it doesn’t get much better than that.

Meeting and Greeting With Purpose