Ann Marie Manahan feels like she was meant to be a Trojan.

The New Jersey native thrived as a USC student in the late 1980s, quickly bonding with professors and making close friends in her sorority and as a member of the USC Helenes, the university’s all-woman service organization.

“I loved every second of it,” she said. “I loved my classes, I loved the quality of the teachers, I loved the architecture. I always felt I was in the most beautiful place in the world.”

That made it all the more painful when Manahan had to withdraw after her sophomore year. An economic downturn hit her family’s finances hard, forcing her to finish her degree at a small university closer to home. 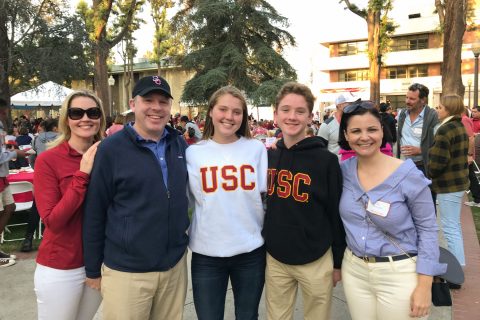 Manahan, left, and her family established a scholarship to help students at USC Dornsife. She recently visited campus with her husband, Marc, and children, Madeleine and Jack. They are joined by Ani Manavyan, director of corporate and foundation relations at USC Dornsife. (Photo/Courtesy of Ann Marie Manahan)

But she never forgot her two years in cardinal and gold. So when Manahan and her husband began supporting causes they cared about through their family foundation, she thought about USC.

Her husband had an idea: Why not create a scholarship for students who needed financial help to stay in school? Thus was born the Ann Marie DeFazio Manahan Scholarship at the USC Dornsife College of Letters, Arts and Sciences.

“I burst into tears when I saw my name on the website,” Manahan said. “It is so special to feel that I have this lasting connection with the school.”

The funding supports students who face financial obstacles that threaten their dreams of earning a USC degree.

“We wanted there to be a safety net for students who find themselves in similar circumstances as I had,” she said. “At the end of the day, it’s about helping ease that burden and anxiety. I’m so honored and humbled to do that.”

To be eligible, USC Dornsife students facing financial hardship must maintain a 3.0 GPA, and preference is given to students from the East Coast and members of the USC Helenes. The scholarship of several thousand dollars goes to one student each year. 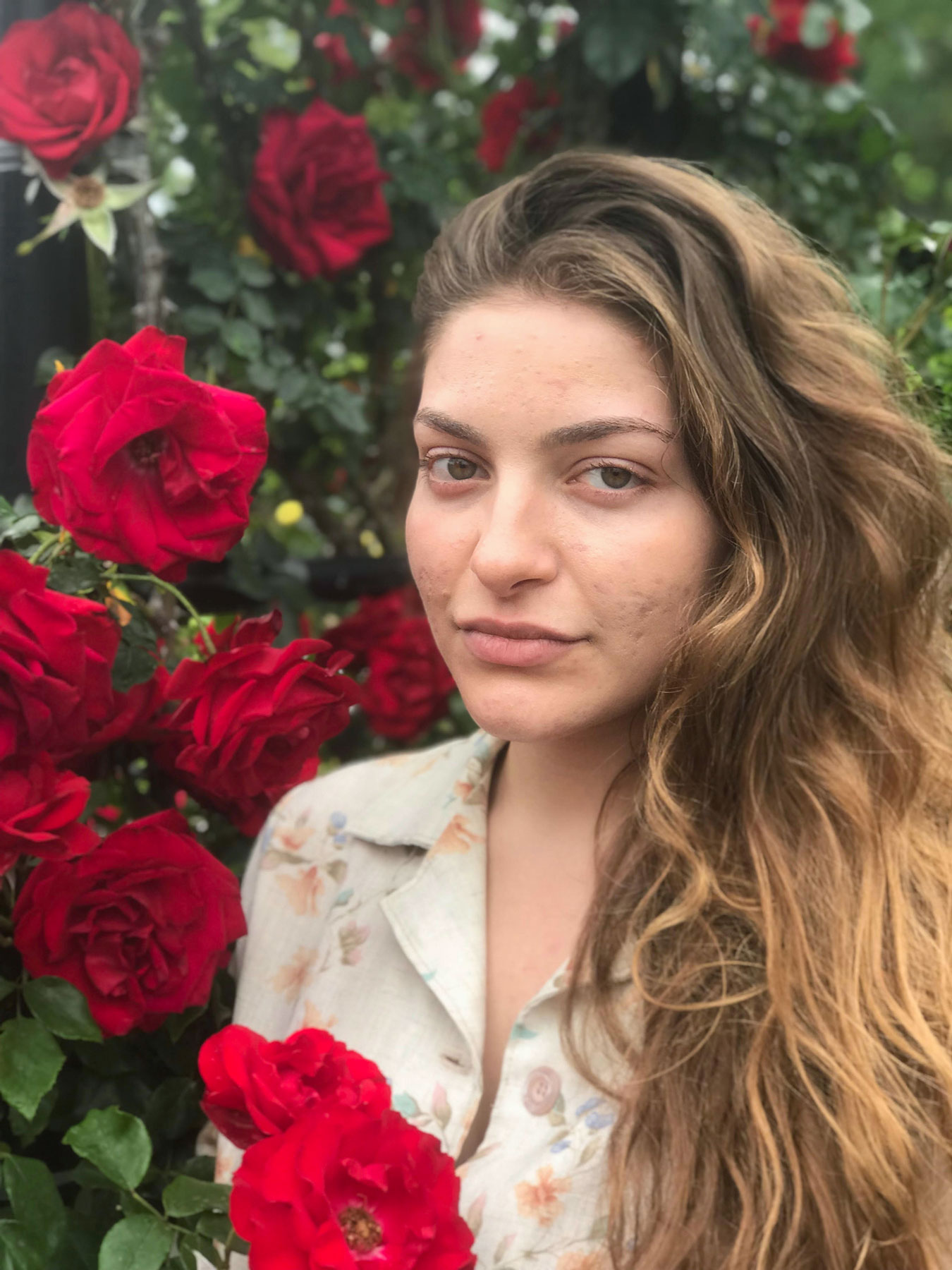 The support has already made a difference to junior Mana Afsari, who is from Virginia. The 20-year-old had spent many restless nights worrying about her finances until she received the scholarship last year as part of a broad financial aid package that includes a USC need-based grant, a Pell Grant and outside scholarships.

“The scholarship represents a lot more than money,” she said. “It’s peace of mind. It’s well-being. I’m incredibly grateful for that.”

When she’s not studying for her major in classics and minors in musical theater and Iranian studies, Afsari works as a resident assistant. She plans to take a work-study job on campus next year to help pay rent, buy groceries and lessen the cost burden on her family — especially because her older sister is also in college.

“It’s really meaningful to get this funding support, because if you nurture a mind at the right time, the dividends pay off forever,” she said. “But if you cut someone off from their educational experience, the damage might be irreparable.”

Financial anxiety can be overwhelming for college students

Sophomore Tucker Matus has a similar story. He grew up in a middle-class family near Philadelphia, where his dad runs an auto body shop. He has an older brother in college and two younger sisters in private school, which has understandably put a strain on the family’s pocketbook.

He had initially felt wary about traveling far from his family to enroll at USC last fall. He took this fall semester off to figure a few things out, including whether he wanted to transfer to a different university, partly to save money. Learning that he would receive Manahan’s scholarship encouraged him to return this spring.

“Just the fact that I would get a scholarship and it was specific to a student like me gave me another push to keep trying at USC,” he said. “Now I’m really excited to come back. I look forward to seeing what’s in store for me in the next few years.”

Just the fact that I would get a scholarship and it was specific to a student like me gave me another push to keep trying at USC.

Matus is still sorting out his long-term plans, but he envisions a career that involves writing, and he is also mulling the possibility of law school. He is pursuing a degree in philosophy, politics and law with a minor in screenwriting.

The USC Dornsife scholarship is part of a larger package of support he has received from USC, including other need-based scholarships. He worked as a research assistant last year and plans to find a similar work-study position in the spring. He is grateful for financial support like Manahan’s scholarship because it means less student loan debt.

“Everybody always talks about the Trojan Family, but it didn’t really hit me until I got this scholarship,” Matus said. “The fact that she wanted to give someone the opportunity to have what she couldn’t have means a lot to me. It makes me proud to go to USC. Hopefully I can graduate and contribute in a similar way.”

A bond to USC shared across generations

Afsari is also inspired by Manahan’s story, especially because she similarly feels like she belongs at USC. She decided to enroll after a visit to campus gave her the sense that she could challenge herself and develop close relationships with professors.

That hunch has proven accurate, Afsari said. She recounts how professors at the USC Price School of Public Policy helped her when she was struggling to decide how to vote during the 2016 election. She was a freshman with no connection to the school, but they gladly walked her through state-level initiatives involving complex issues like property taxes, helping her figure out positions that fit her values.

“It feels like they are genuinely invested in my life,” she said. “It’s those excellent one-on-one, mentorship-based relationships that I find incredibly valuable.”

Those themes echo Manahan’s experiences as a student. Manahan remembers falling so madly in love with USC during a campus visit in high school that she canceled her plans to check out several other nearby universities. When the acceptance letter came, there was no question she would enroll.

She quickly established strong ties with her professors and found gratifying volunteer opportunities with the USC Helenes, through her sorority, Alpha Delta Pi, and during a fundraiser for the nonprofit initiative Swim With Mike. 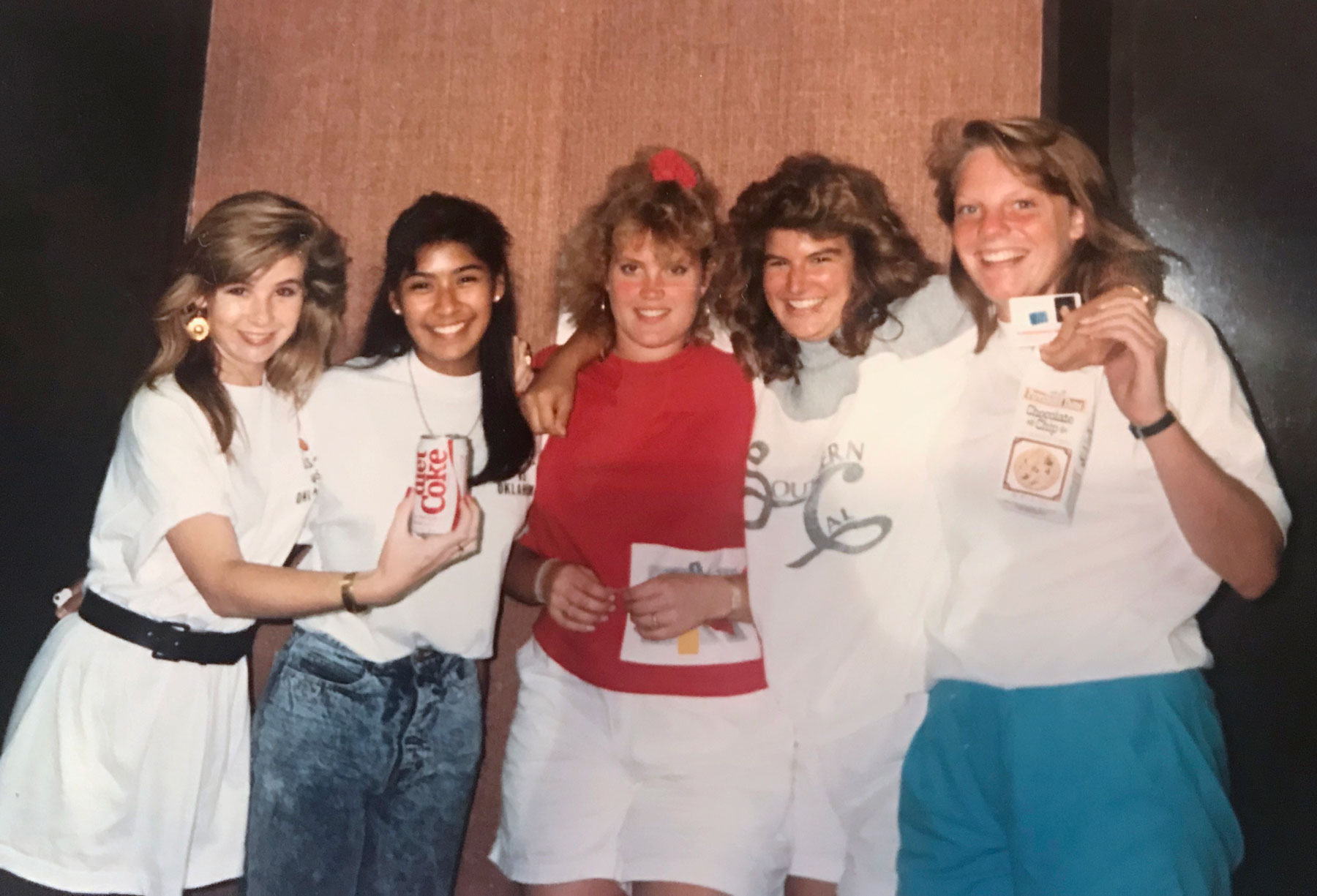 But her father was a self-employed homebuilder, and the family business took a hit during the economic recession of the early 1990s. Manahan remembers her dad pulling her aside to explain the situation.

“It was tough. I thought I was starting my junior year at USC, but I found out I was transferring,” she said. “I understand now you have to roll with the punches in life. It’s going to throw you a curveball, and it’s all about how you respond.”

Manahan rebounded quickly, finishing her degree in communications and pursuing a successful career in the telecommunications industry. She later earned her executive MBA, then shifted into nonprofit fundraising and development while starting a family in Morristown, New Jersey, where she grew up.

She maintained ties to her USC friends and her renewed relationship with the university bloomed during a trip to the University Park Campus several years ago with her husband, Marc; daughter, Madeleine, now 17; and son, Jack, 14.

“They’d heard me rave about USC my whole life, but they never got to visit,” Manahan said. “We weren’t on campus five minutes before my daughter said, ‘Now I understand why you love it so much.’”

The family returned again during the recent Thanksgiving holiday to tour the campus and catch the USC-Notre Dame football game at the Los Angeles Memorial Coliseum. At one point during the long weekend, her kids grew tired and wanted to relax at their hotel room, so Manahan had her husband drop her off at her former apartment on Ellendale Place.

That adage is so true — you’re a Trojan for life.

She spent the next few hours exploring the neighborhood she once called home, visiting her old church, St. Vincent de Paul of Los Angeles, and marveling at Our Savior Parish & USC Caruso Catholic Center and the dramatic changes at USC Village.

Manahan then caught the strains of the Trojan Marching Band playing in the distance and followed the sound to watch them practice. “It was a sight to behold,” she said. “Nothing can come close to our marching band, and hearing them in person always brings tears to my eyes.”

The experience has only reinforced her bond with USC.

“That adage is so true — you’re a Trojan for life,” she said. “It has stayed with me for all these years, and I’m so happy to reconnect with the university and help build something for the future.”

To learn more about scholarships and opportunities to support students at USC, visit USC Dornsife’s website and the university’s main giving page.