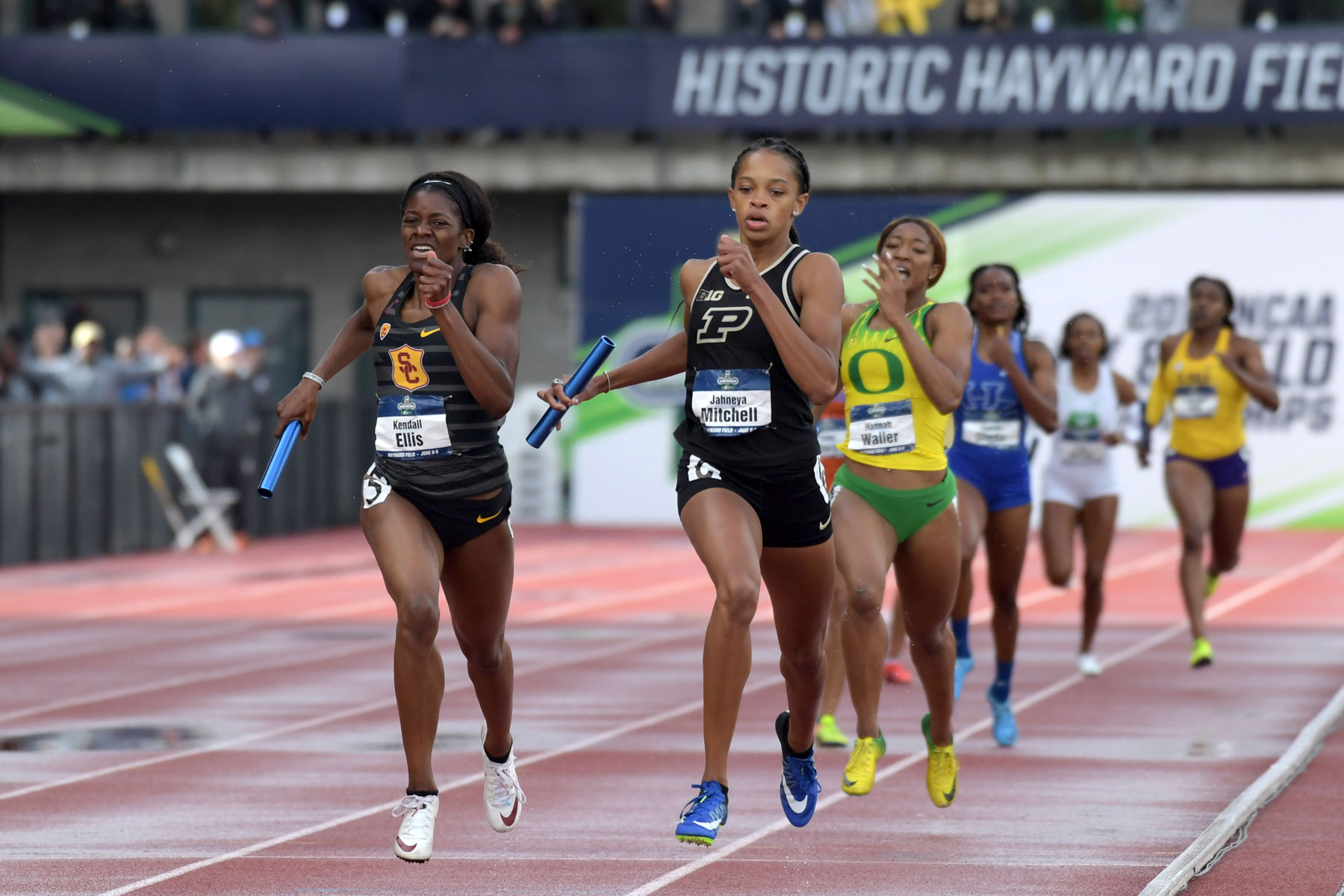 Kendall Ellis of USC, left, defeats Jahyeya Mitchell of Purdue on the anchor of the women’s 4x400m relay, 3:27.06 to 3:27.13, to clinch the team title during the NCAA Track and Field championships. (Photo/Kirby Lee, Image of Sport)

The football season may not have turned out as we’d have liked, but Trojans had plenty to cheer about where USC student-athletes are involved — including the university’s 128th, 129th and 130th national championships. Take a look back at some of the highlights on the courts, course, track and especially the pool.

‣ An unbelievable run — for a national title

After a memorable season, the men’s water polo team brought a seven-goal lead into the fourth quarter of the championship match and there was no looking back. National Coach of the Year Jovan Vavic’s squad held out to defeat host Stanford 14-12 on Dec. 2 to win the 2018 NCAA title — the Trojans’ 10th men’s water polo title, and seventh since 2008. USC finished with its first 30-win season (30-3). 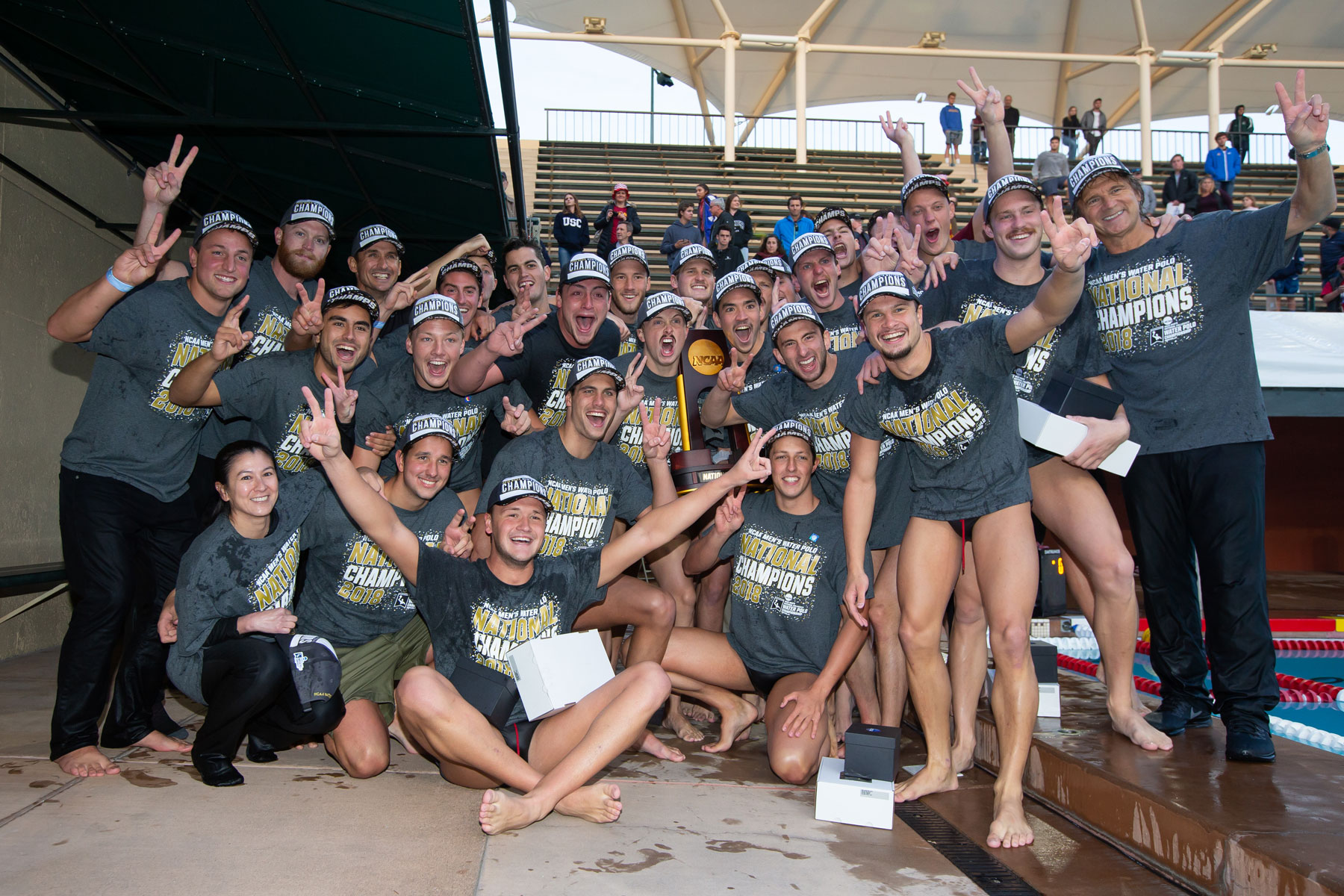 The men’s squad was simply following the path of its female counterparts: In May, the women’s squad, also led by Vavic, also beat Stanford to claim the national title. It was the sixth title won by the women’s team — and both squads’ titles have come under the watch of Vavic, who was also this 2018 women’s National Coach of the Year. 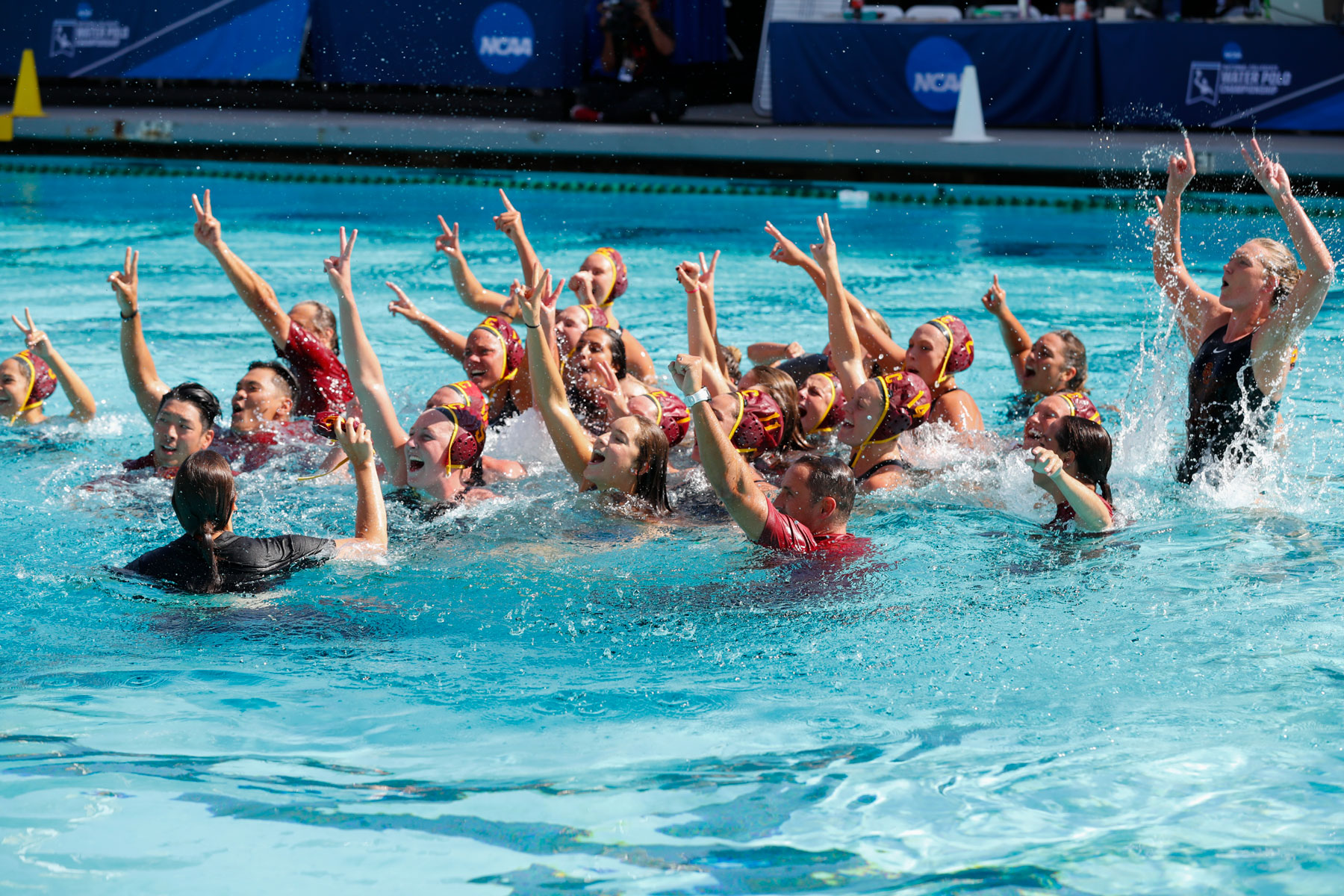 ‣ A new look for an old friend

Cranes and construction crews made for a unique year at the Los Angeles Memorial Coliseum, where a $300 million project got under way to update the 95-year-old stadium and add world-class amenities. But the show must go on: The legendary field — the only stadium in the world to have hosted two Olympics (with a third on the way) — continued to host Trojan and Rams football games. 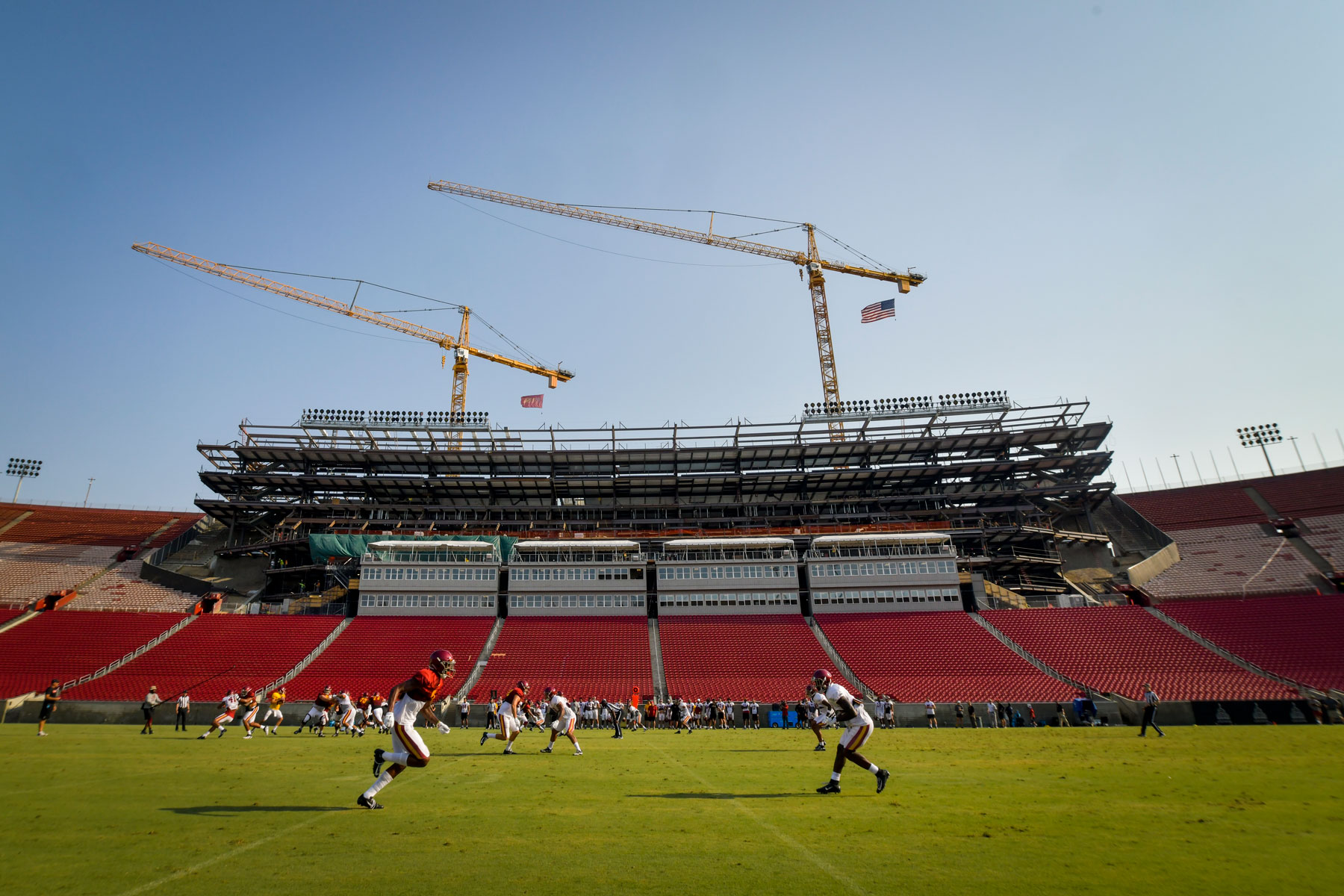 ‣ More winners in the pool

Trojans’ victories in the pool weren’t limited to water polo. Among the swimming highlights of the year were sophomore Louise Hansson winning USC’s first NCAA title in the 100-yard butterfly (with the second-fastest mark of all time) and the men’s team of Dylan Carter, Santo Condorelli, Robert Glinta and Carsten Vissering winning the 200-yard medley relay with the second-fastest NCAA-title-winning-time ever. 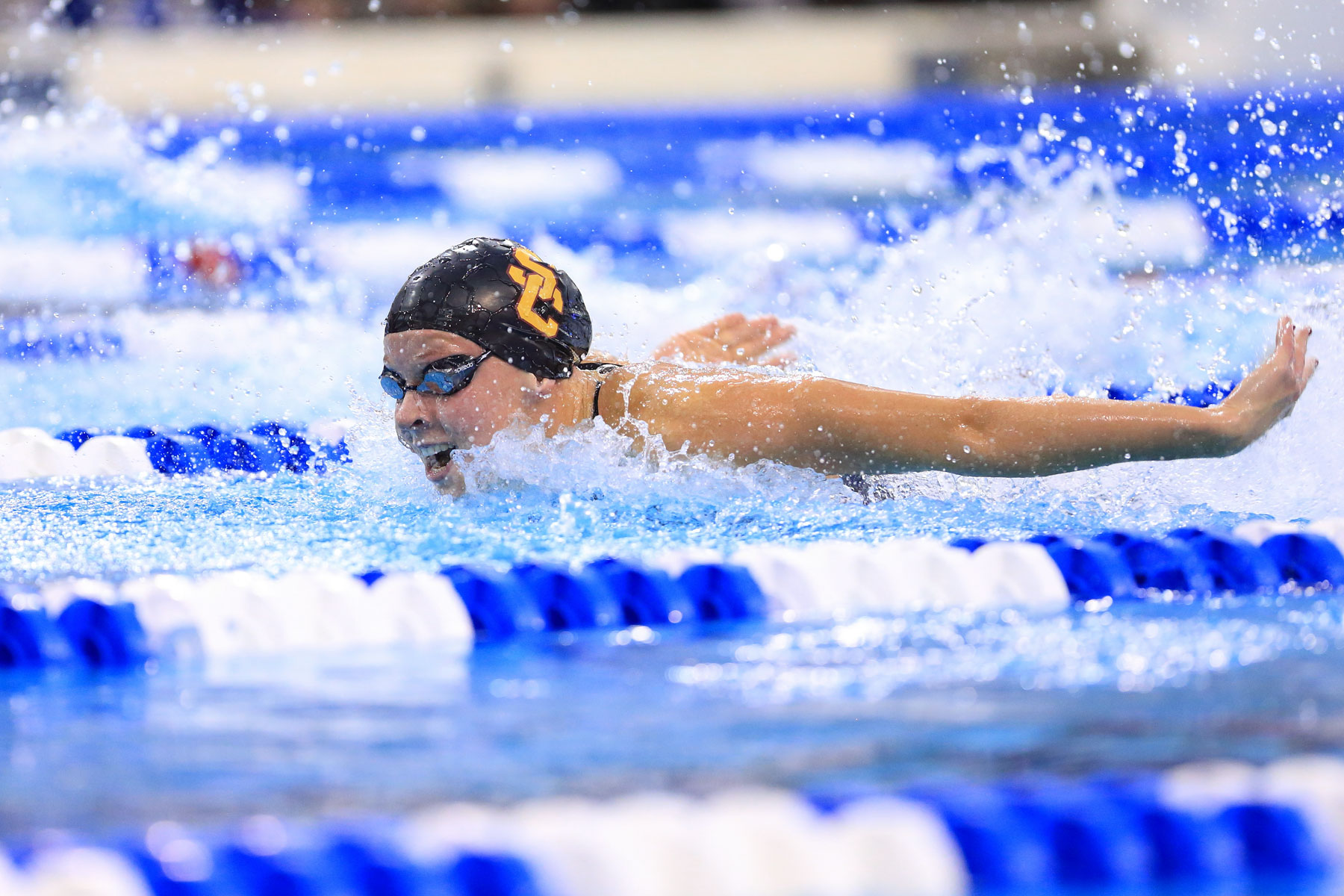 Louise Hansson wins in the 100-yard butterfly at the 2018 NCAA Women’s Swimming and Diving Championships with the second-fastest time ever. (Photo/Walt Middleton) 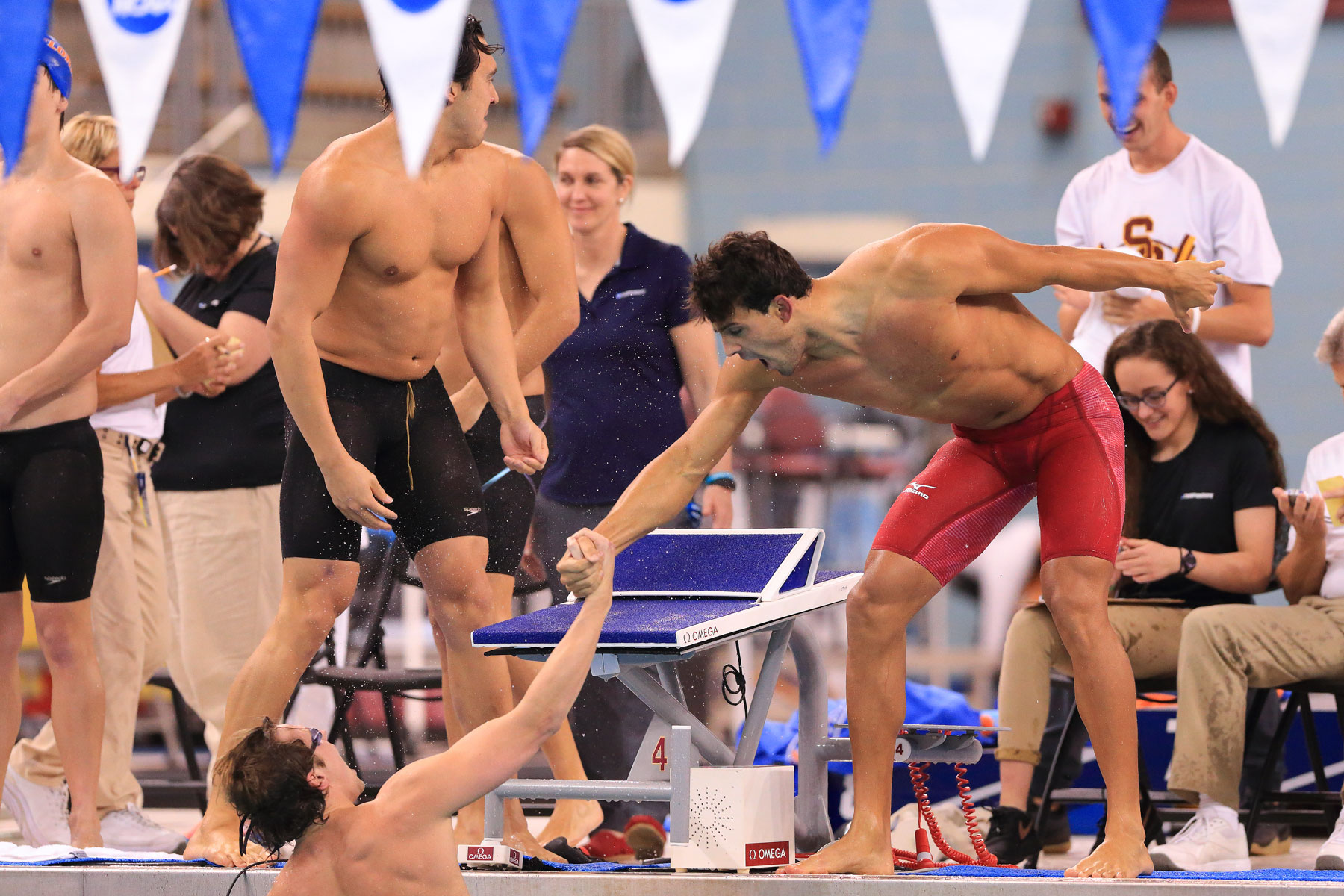 On the links, senior Justin Suh had arguably one of the best seasons in USC men’s golf history. Suh, the world’s top-ranked amateur golfer, led the team to individual and team Pac-12 Conference titles for the first time since 2011. 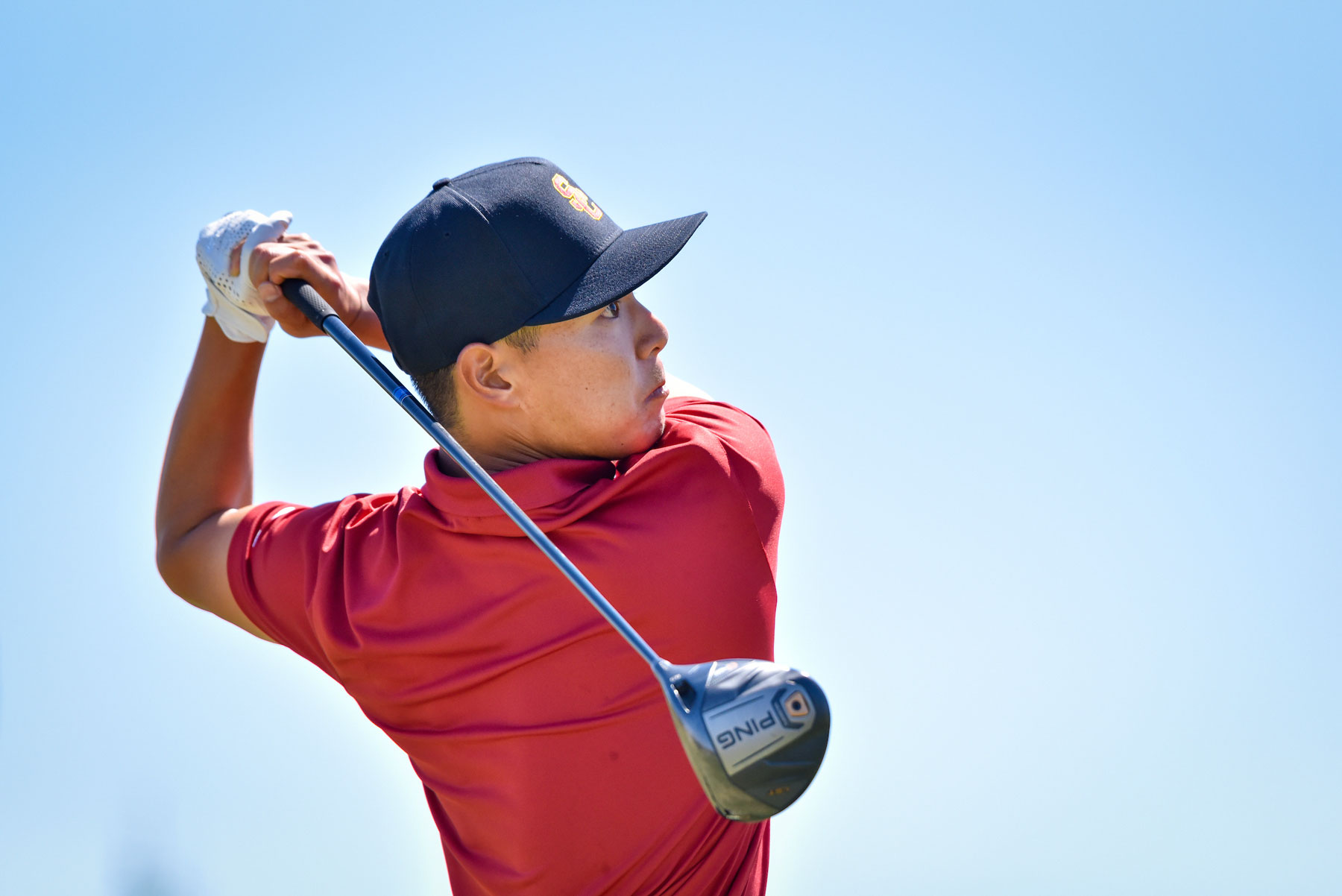 ‣ Another USC QB goes in the first round

Following the likes of first-round picks Mark Sanchez, Matt Leinart and Carson Palmer, Trojan Sam Darnold headed to the NFL as the No. 3 pick in the first round of the draft. Darnold headed to New York; he took the field in the season opener and led the Jets to an impressive 48-17 win over the Detroit Lions. 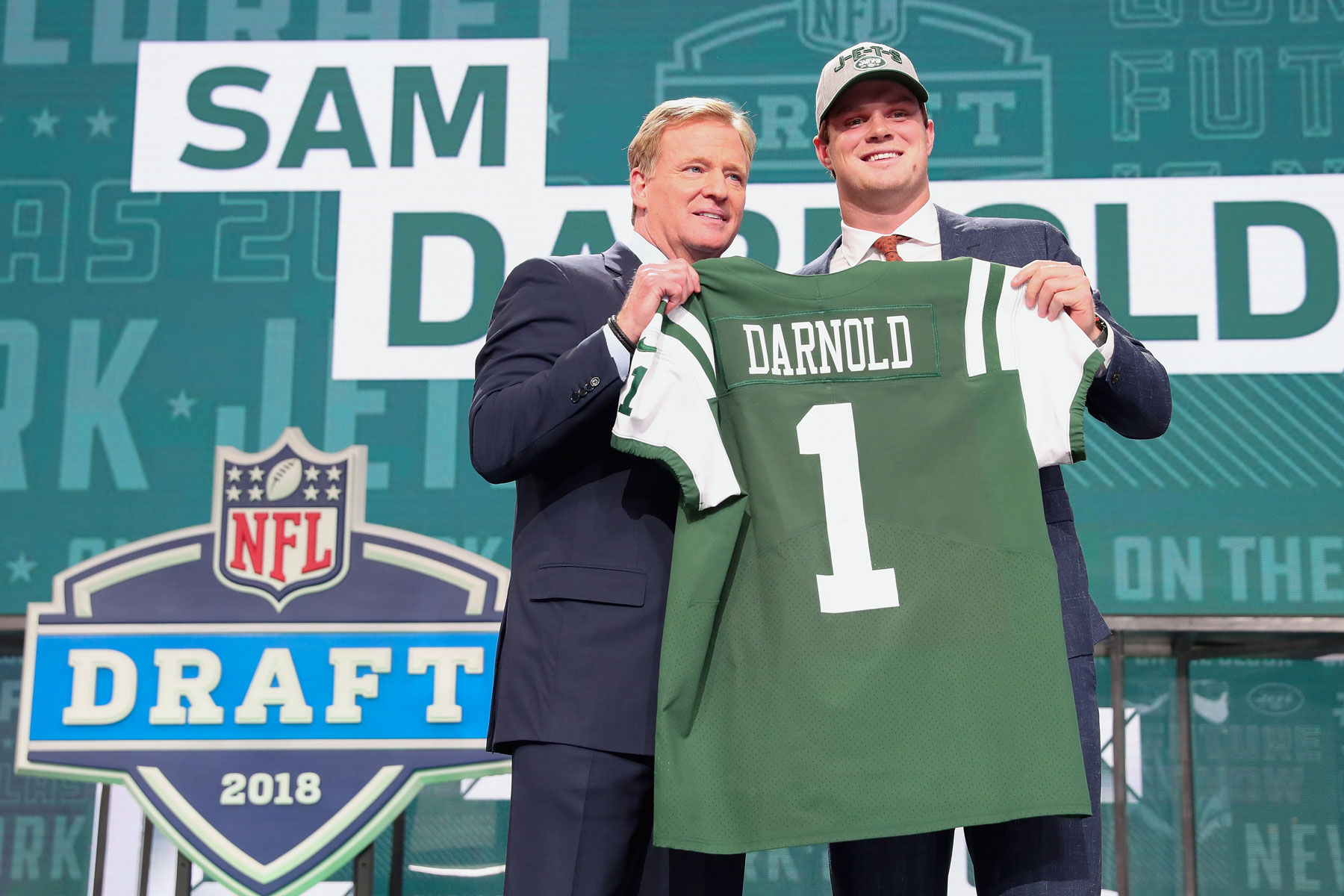 Sam Darnold poses with NFL Commissioner Roger Goodell after being picked No. 3 overall by the New York Jets during the first round of the 2018 NFL Draft. (Photo/Tom Pennington, Getty Images)

USC joined Pac-12 rivals Stanford and UCLA at the top of the Division I Learfield Sports Directors’ Cup standings. With 2017-18 national championships in women’s water polo and women’s outdoor track and field, the Trojans placed fourth, their fourth top-four finish in a row. 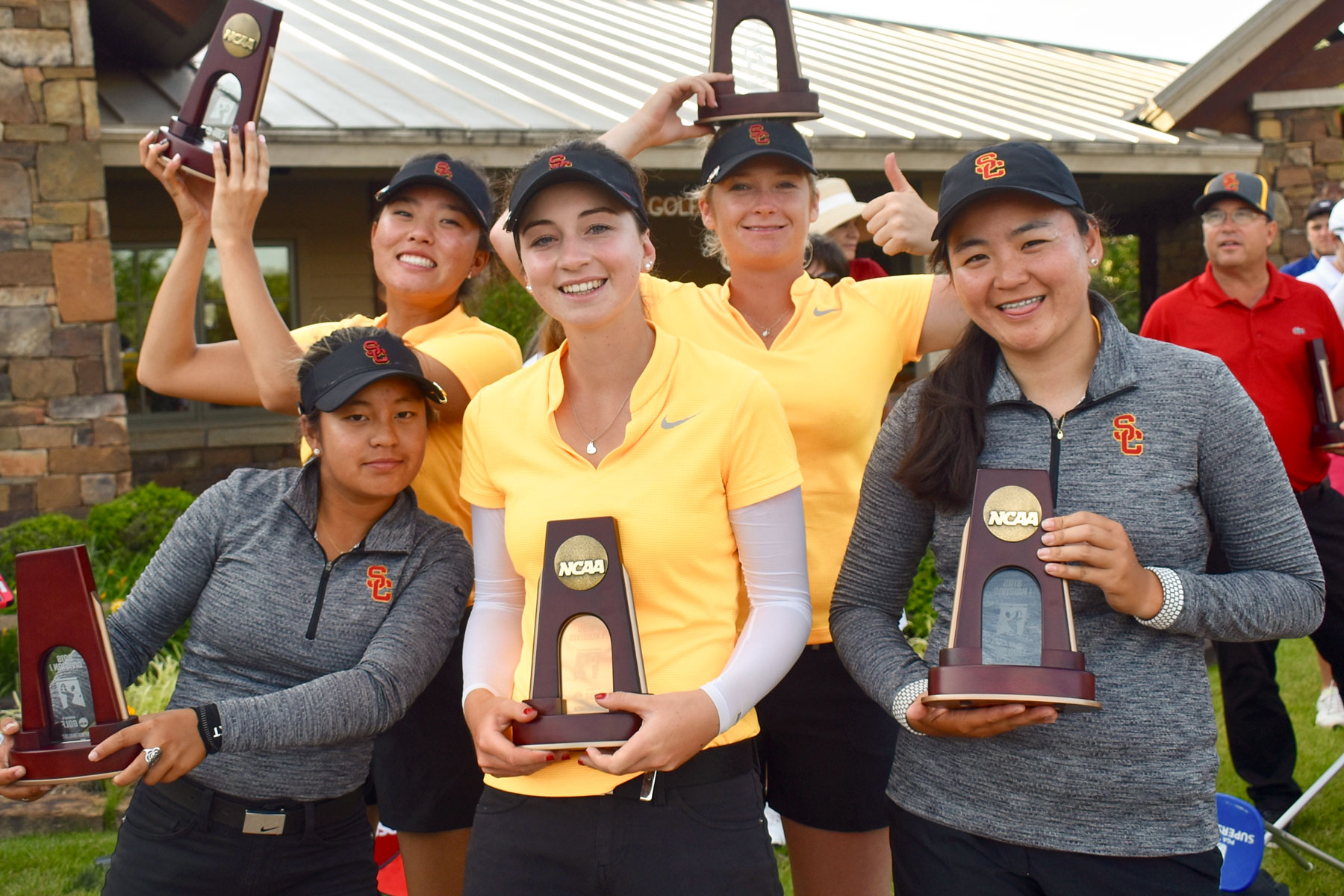 ‣ Making a difference off the field, too

The dedication of USC’s student-athletes extends off the field, too, through the USC Athletics community service initiative known as Trojan Outreach, with participants from all 21 varsity sports pitching in. Last year, 650 student-athletes performed more than 5,000 hours of volunteer work. That hard work is getting attention: USC was honored as winner of the 2018 Community Service Award sponsored by the National Association of Collegiate Directors of Athletics and the Fiesta Bowl. 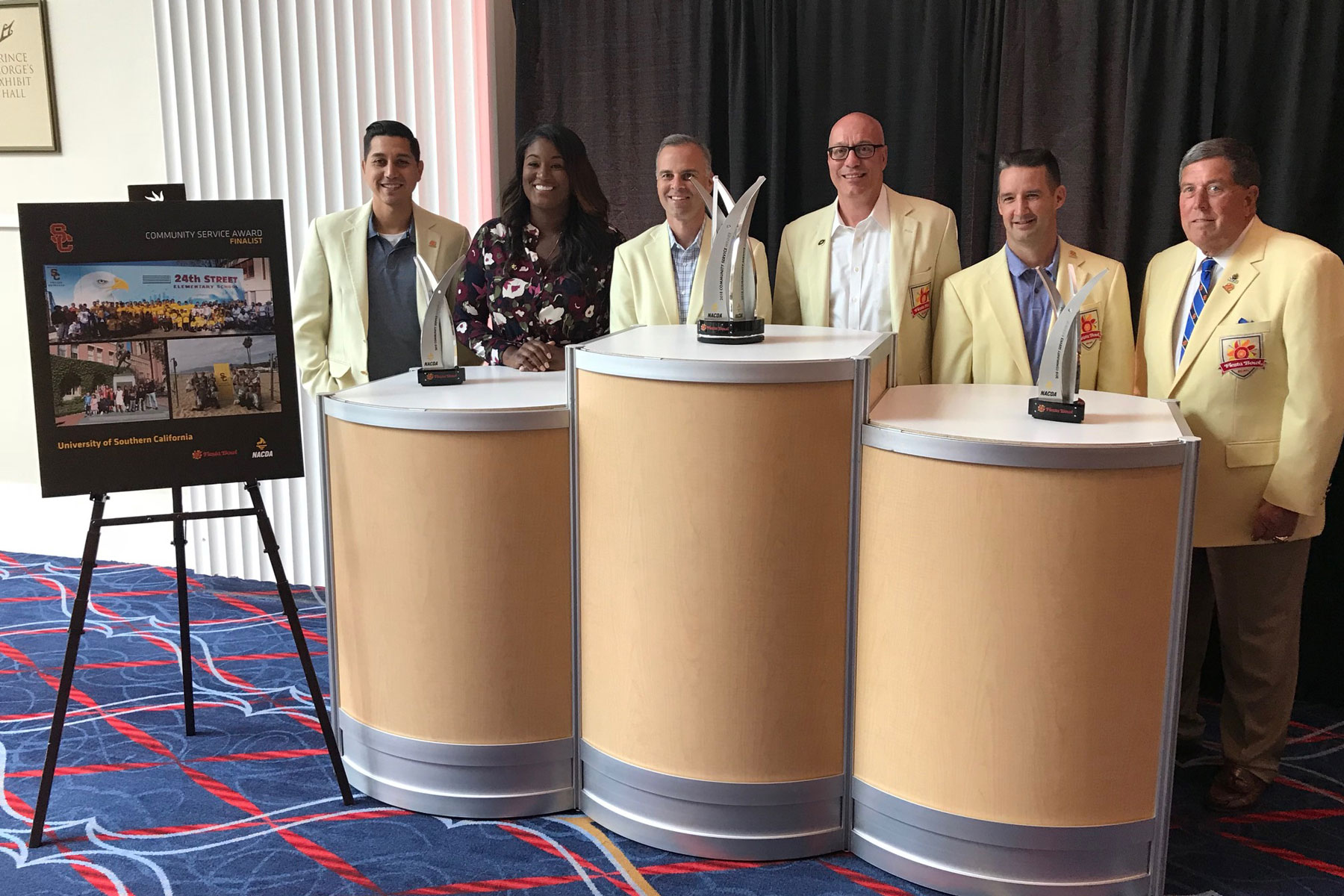 USC’s director of Trojan Outreach, McCall Hall, second from left, stands with five representatives from the National Association of Collegiate Directors of Athletics and the Fiesta Bowl as she accepts the 2018 Community Service Award. (USC Photo/Tim Tessalone)

✌ Year in review: Move-ins and a marching band, students and celebs and student-athletes leave long-lasting memories. Take a look at the best pictures of the year.

✌ Year in review: From the most competitive freshman class in USC history to Trojans making waves in Hollywood, many of our stories captured your attention in 2018.

✌ Year in review: There are definitely perks to being in the entertainment capital of the world and the business capital of the West. Take a look at some of the famous faces who stopped by for a visit.

USC 2018 | Trojans who inspired us this year

✌ Year in review: Get a warm glow from the uplifting stories of these USC students, professors, alumni and employees.