Manley brings more than two decades of experience in law enforcement to USC in his new position in the Office of Professionalism and Ethics. The office is a central hub for complaints and investigations into serious issues like workplace conflict, inappropriate behavior and discrimination.

In his new role, Manley will track ongoing investigations across the university to ensure they are resolved efficiently and equitably. The position poses the kind of challenges he relishes.

“We have an opportunity here to take a great organization and to put some processes in place to make it an exceptionally great organization,” he said. “The exciting part is to see where this office goes and how it develops to further support the university.”

It promises to be a high-tempo atmosphere, but Manley is confident his leadership experiences at the Costa Mesa Police Department, including overseeing sensitive criminal investigations and personnel issues, have prepared him for it. 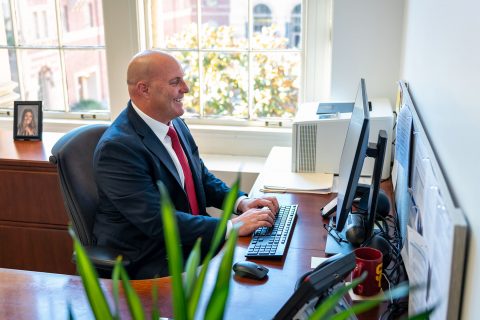 Manley grew up in Anaheim as an athlete, excelling in sports like football and wrestling in high school. He also served as a senior class officer, hinting at the attention to detail and leadership skills that would go on to serve him well.

He began his career by joining the U.S. Coast Guard as a reserve port security specialist, working in the ports of Los Angeles and Long Beach while attending college. He oversaw random inspections of foreign ships, checking manifests and ensuring they had proper navigational equipment, a top priority following the high-profile Exxon Valdez oil spill in 1989.

Along the way, he earned his college degree from the University of California, Irvine in criminology, law and society. Manley’s uncle served as an inspiration: He was a homicide investigator in Orange County. “I was always intrigued by his stories, and that prompted my interest in law enforcement.”

Law enforcement also was an outlet for Manley’s urge to give back to his community, a value emphasized by his hard-working and humble parents. He was intrigued by military heroes as a young boy, likely influenced by his father’s and uncle’s service in the U.S. Army.

“Throughout my life, there’s been a common thread of service to community and country,” he said. “I’ve always wanted to be somebody who could be a role model.”

Manley joined the Costa Mesa Police Department as a patrol officer in 1995. He climbed the ranks, becoming a captain in 2014.

Along the way, he oversaw special investigation units that tackled major drug trafficking, career criminals and gang violence. As captain, he supervised all field operations — from patrol and traffic enforcement to community engagement and school safety services. His team managed large-scale events like the Orange County Fair and Orange County Marathon, and Manley sat on the review board for internal administrative investigations.

A major challenge came during the economic downturn in the late 2000s, when budget cutbacks and large-scale attrition significantly reduced the department’s ranks.

“We had a collective job to ensure we were still providing the highest levels of service to the community,” Manley said. “We also had to rebuild a culture in the police department, not unlike what we are doing here at USC — to strengthen the foundation, renew the mission and vision and create new policies and best practices.”

I’m a firm believer that necessity is the mother of invention.

In those times of uncertainty and anxiety, he said it proved critical to be open and accessible to others in the department and community. He made it a point to regularly visit shift briefings with officers, pledging to answer tough questions and share any information he could about challenges and the department’s plans moving forward.

“I really cut my teeth on crisis management and communication,” he said. “I’m a firm believer that necessity is the mother of invention. It’s in those moments of crisis where you see the necessity and you respond with invention.”

Manley plans to bring that same mind set of collaboration and innovation to his role with the USC Office of Professionalism of Ethics.

“This office was created to address challenges in a new and creative way and to maintain a high level of communication, accountability and transparency,” he said. “As we move forward and look at metrics for success over the next year or two, my hope is that this becomes an office that other universities across the country look to model as a success story.”

His main priority, along with continuing to build the office’s staff, is to launch in the very near future a centralized database to monitor complaints and the progress of investigations. The university-wide software system will bring human resources offices and all investigative units, such as Title IX, Office of Equity and Diversity, Office of Compliance and Office of Athletic Compliance, together on a single software platform. The tool will allow those departments to track and manage their individual complaints.

“It will also allow our office to globally view the entire system to get a snapshot of what’s happening at the university,” Manley said. “Not only will we look to create efficiencies with our investigations, but we will ensure nothing falls through the cracks. With the use of the big data we will accumulate, it will also allow us to be more proactive and look for areas of risk we can address.”

Manley also talks regularly with faculty, staff and students about the office’s capabilities and services — an effort started by his supervisor, Michael Blanton, USC’s vice president for professionalism and ethics.

“There’s a sense of eagerness to see what this office can do,” Manley said. “During uncertain times, any kind of change can be unsettling, but we have largely been met with support and enthusiasm, and that is exciting.”

To learn more about the USC Office of Professionalism and Ethics, visit its website.

New chief of professionalism and ethics wants to instill culture of fairness, integrity

Michael Blanton will oversee a new office dedicated to handling complaints and sensitive investigations across the university.

Trustee and his wife endow the Jerry and Nancy Neely Institute with a $10 million gift.

Lawrence Palinkas has been appointed to the Institute of Medicine’s Committee on Ethics, Principles and Guidelines for Health Standards for Long Duration and Exploration Spaceflights.

Election 2020 chatter on Twitter busy with bots and conspiracy theorists

A new USC study finds that — just as in 2016 — automated accounts and foreign interference are infesting social media conversations about the upcoming election.

California gives rent control another chance on the 2020 ballot

In a state with notoriously high housing costs, voters will consider yet another new take on rent control. USC experts dissect the pros and cons of Proposition 21.