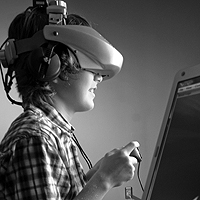 “When your kids are playing video games, the kitchen could blow up and they wouldn’t notice,” said Jeffrey I. Gold, assistant professor of anesthesiology and pediatrics. “Why is that? That’s what we are investigating.”

Gold, a member of the interdisciplinary Comfort, Pain Management and Palliative Care Program in the department of anesthesiology critical care medicine at Childrens Hospital Los Angeles, is studying the power of virtual reality (VR) to provide pain relief for children.

His 2006 study of the use of virtual reality during pediatric venipuncture demonstrated that it can be effective in reducing or eliminating pain.

Children in the study were separated into two groups: those who played a virtual reality game, “Street Luge,” and those who had a topical anesthetic.

Children in the virtual reality group were calm, less anxious and more cooperative during the intervention, indicating a reduction in overall pain and distress.

Virtual reality environments do seem to provide a distraction for patients, which may help reduce their capacity for pain, but they could also be doing much more.

“The initial assumption of many people is that VR works because we all have a limited capacity for attention, and if you can distract someone with VR, then it reduces their capacity for pain. But I am trying to better understand the function of the brain and how VR may change the brain’s response to pain,” Gold said.

“We’re looking at fMRIs and other measures to see if VR actually creates analgesia, rather than just providing a distraction from the pain.”

Gold’s most recent work suggests that a full 360-degree virtual reality environment may inhibit the brain’s ability to perceive and process pain by acting through the anterior cingulated cortex.

So what does the future hold for virtual reality?

The technology associated with the treatments, including the head-mounted display units, is becoming more affordable and so use of virtual reality is beginning to spread in hospitals across the country.

But Gold is anxious to push the technology even further, in order to provide more specialized treatment for patients.

Gold is convinced that the future of virtual reality is wide open, with the potential for application in patients suffering from chronic pain and anxiety.

“VR is an area of research that is moving forward, and there is so much possibility and opportunity for growth,” he said. “This area of study is really in its infancy.”