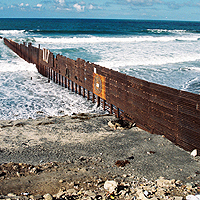 In this image from the exhibit, the fence on the U.S.-Mexico border recedes into the ocean.

Cerca de la Cerca � Near the Border Fence, a new Annenberg Gallery exhibition by photographer Mar�a Teresa Fernández, documents life and death along the border fence between the United States and Mexico.

“For a school of communication and journalism, the obligation to show rather than merely tell about the most important issues and concerns of our time is an important part of our educational mission,” said Larry Gross, director of the USC Annenberg School of Communication and an expert in visual communication.

“The border fence is a political object, and it is also a cultural object that has been touched � literally � by the hopes and the suffering it represents,” Gross said. “These photographs bring us face to face with the reality of this scar on the landscape and on our national soul.”

Fernández immigrated to the United States from Mexico in 1991, the same year construction of the border fence began. She has documented life and death along its edges since 2001, when work on the physical barrier between the two countries intensified following 9/11.

“This border fence has been both the witness and the cause of so many deaths of people filled with ambitions,” Fernández said. “(It) has become a handkerchief of tears, a canvas where family members, artists and activists paint their emotions and their frustrations. This way, their respect is made evident for all the deceased. Here, at the border fence, they are remembered.”

The exhibition demonstrates how the fence has evolved and changed physically through the interaction of man and nature. It also tells personal stories of families reunited, if temporarily, at Friendship Park, the only place along the fence where people can touch loved ones on the other side.

The ocean has displaced some of the rails, and people can cross over for a few moments under the watchful eyes of the Border Patrol. “People make appointments to meet there,” Fernández said.

“The border is a 2,000-mile-long world,” said USC Annenberg communication professor Josh Kun. “In the last four or five years, it has been a hot-button political issue that is not representative of the social realities that exist there. Its complexity has yet to be grasped by the mainstream media.”

Like the fence itself, the exhibition of approximately 80 photographs will evolve and change over the course of its run. Fernández continues to document developments along the fence, which she visits each week, and plans to include new images as they are shot.

“This is an opportunity for students and others to see the border through a different set of eyes � to see how the official border and the unofficial border are in dialogue with each other and inform each other,” Kun said.

Fernández’ photography has been recognized by institutions such as Nikon, Canon, Photographer’s Forum, Red Plástica and the magazine Artes de M�xico.

Her work has been exhibited throughout M�xico in Tijuana, Mexicali, Tecate, Guadalajara, San Luis Potos� and Oaxaca.

In the United States, her work has been exhibited in San Diego, New York and Pasadena. In November 2006, the images of Cerca de la Cerca were part of the conference “Life in the Shadow of the Wall,” celebrating the fall of the Berlin Wall.

Regular viewing hours will be Monday through Friday, 10 a.m. to 5 p.m. The exhibition, which runs until next May, is free and open to the public.

Cerca de la Cerca: Along the Border Fence is presented in partnership with the Armory Center for the Arts. For more information, call (213) 821-3015.

Life and Death Along the Edges