Sometimes a few caring adults can make all the difference to a child’s future. USC student Saianna Smith is living proof.

Smith grew up with 10 brothers and sisters, and education wasn’t a priority in her South Los Angeles home, so she didn’t get a lot of individual attention. When a middle school English teacher insisted that she enroll in a USC program that would get her ready for college, she felt like someone believed in her potential. A door opened into another world.

She joined the Leslie and William McMorrow Neighborhood Academic Initiative (NAI), which helped her conquer subjects like trigonometry and English literature. The extra support paid off: She got into college and is now earning her master’s degree at USC.

If I wasn’t involved in a college access program like NAI, I don’t think I’d be where I am today.

“If I wasn’t involved in a college access program like NAI, I don’t think I’d be where I am today,” Smith said. “Most of the students who went to my high school didn’t have those same kinds of resources to get to college.”

Today, she is not only thinking about her own future, but also the future of other young people like her. She wants to open opportunities to others and become a guiding figure — like those who helped her thrive. When she finishes her degree in educational counseling at the USC Rossier School of Education this spring, Smith plans to work as an academic adviser in urban schools, supporting and encouraging boys and girls who grow up in challenging circumstances.

She is already getting plenty of firsthand experience as a special projects coordinator with NAI. She oversees summer programs, schedules classes, talks with parents and organizes orientation sessions. But the most rewarding part of her job is bonding with students.

“They kind of feel like a younger me,” she said. “Getting to connect with them, to let them know they can be in my position in 10 years, is really cool.”

USC was a fixture in Smith’s childhood, much of which she spent with her family in an apartment just a block west of University Park Campus. The university became an even bigger part of her life when she began attending John Muir Middle School, south of USC. Her English teacher there, Joy O’Renick, saw promise in Smith and encouraged her to study subjects like math and literature through NAI.

The rigorous seven-year program prepares students from the neighborhoods around USC to gain admission to a college or university. Participants commit to after-school tutoring and Saturday morning classes on the University Park Campus. That was a tough sell for the young Smith in the beginning.

“I didn’t want to go to school on Saturdays,” she said. “I wanted to go to cheerleading and hang out with my friends.”

But her teacher insisted, showing up every weekend to drive her to USC after Smith moved farther from campus. Smith soon found she enjoyed the academic challenge and could balance her other interests, even becoming captain of the cheerleading squad. 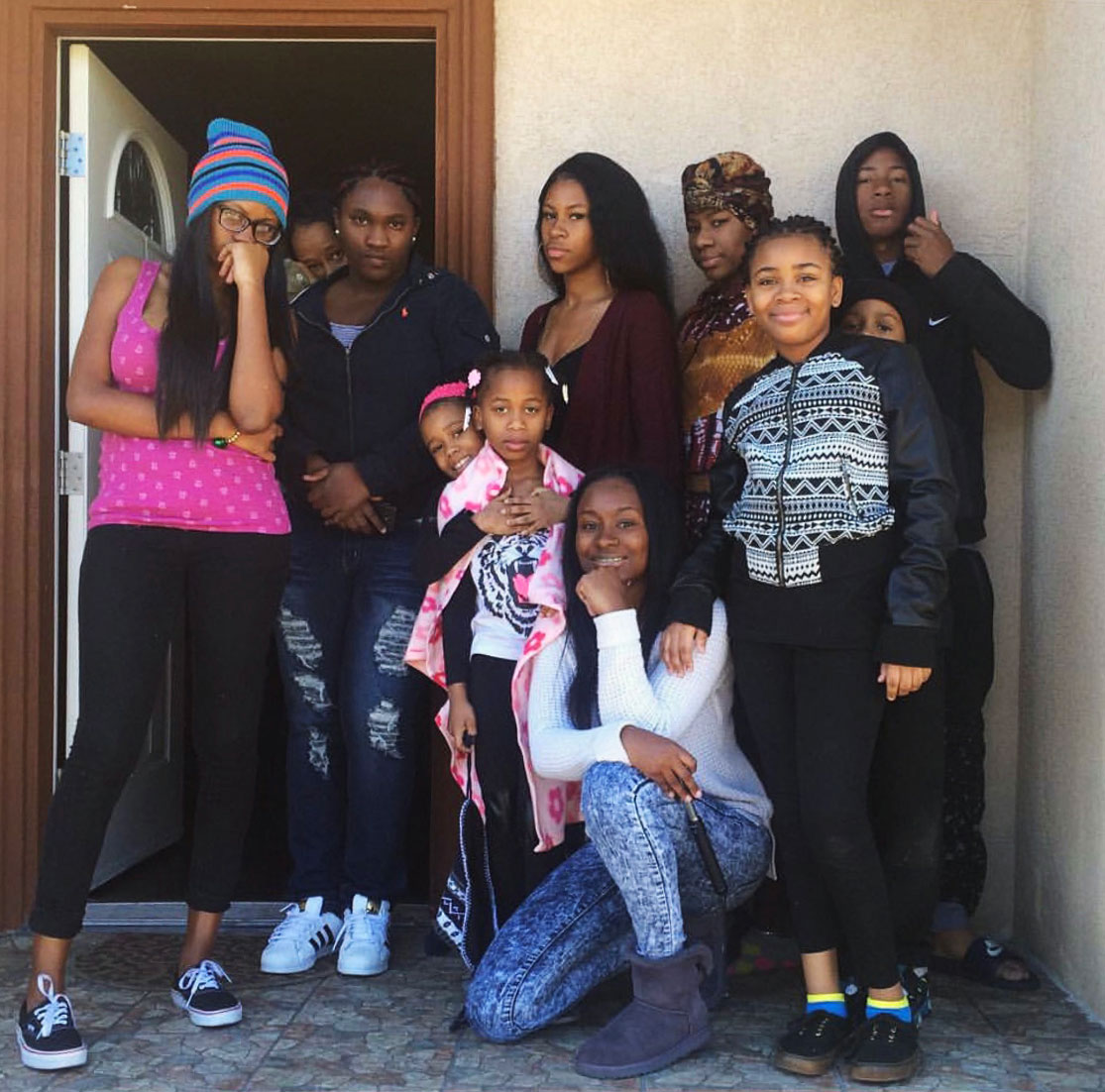 Saianna Smith, center (in white), wanted to be a role model for her siblings by pursuing a college degree. (Photo/Courtesy of Saianna Smith)

By high school, she was helping raise her younger siblings. Because academics weren’t emphasized at home, there were no expectations she would attend college. But Smith stuck with the NAI program, receiving specialized instruction, after-school counseling and guidance with time management and study skills. Her two brothers and eight sisters became her motivation.

“I felt like I had to set the bar, so even if they don’t go to college, they know that it’s possible,” she said. Even now, photos of her siblings adorn her phone and computer screens. “When times are getting tough, I look to them. I’m doing it for them.”

Proud to be welcomed into the Trojan community

Smith graduated from NAI and entered the University of California, Irvine, where she continued to receive supportive services from NAI as she completed her undergraduate degree in education and African-American studies. She also found crucial encouragement from Jonli Tunstall, a mentor at her church who runs a college access program at UCLA.

Over three weeks, USC News looks at Town & Gown of USC and how the philanthropic organization is changing the lives of some fascinating Trojans:

The university’s oldest women’s philanthropic support group awards 150 merit-based scholarships to Trojans each year and boasts an endowment in excess of $44 million.

First-generation USC student Saianna Smith, a graduate of the university’s Leslie and William McMorrow Neighborhood Academic Initiative, models herself after those who helped her succeed.

Once a foster youth himself, Demontea Thompson earned his master’s degree at the USC Rossier School of Education and now advocates for foster kids.

Meet Nikki and Shaliz Aflatooni, sisters and USC undergraduates who are dedicated to community service.

Tunstall helped her through a few rough patches as an undergraduate, then welcomed Smith into her home while Smith worked as a college counselor at a middle school in Inglewood through an AmeriCorps program after college. She pressed Smith to look into earning a master’s degree and helped her apply to USC.

Smith was wary about taking on expensive student loans, but financial aid from USC Rossier convinced her to enroll. More support came when a board member at NAI told her about Town & Gown of USC, the university’s oldest women’s organization. The nonprofit provides $1.5 million in merit-based scholarships to local USC students each year. After Smith shared her inspiring story with Town & Gown, the organization awarded her a $10,000 annual scholarship toward tuition.

“I’m so thankful for the support,” she said. “I’m not taking anything for granted.”

She still gets chills when flashing her USC ID to get a student discount. She swells with pride when she brings her younger siblings to campus to help them get a feel for the university environment.

“On the first day of class last fall, I couldn’t get over it,” she said. “I’ve sat in this exact same classroom before, but now I’m a real Trojan. I don’t think I’ll ever get over the fact that I go to USC.”

Giving back to the village that raised her

Thanks to her positive experiences with education, Smith fell in love with academic advising. She is still figuring out whether to focus on promoting college access or advising college students. It’s something she plans to decide during her final year at USC. She envisions working in Southern California and potentially pursuing a PhD in urban education in a few years.

She has already proven invaluable to the college access program that helped her succeed, said Lizette Zarate, NAI’s program director. Although Smith was hired to manage NAI’s weekend and summer programs, she jumped at the opportunity to contribute in other ways.

“There isn’t a facet of the program she isn’t involved with,” Zarate said. “She is just remarkable.”

Smith engages with alumni, plans events, preps applications for review and checks in with students when they miss a class. She even helps out with Kinder 2 College, USC’s literacy program for local kids that starts in kindergarten.

“We knew she was exceptional, but having her work for us and getting to know her has shown us just how committed she is,” Zarate said. “When she commits to something, you can count on her being there wholeheartedly. We’re so proud of her.”

Proud parents take a rare day off to share a milestone as their son moves in at college.