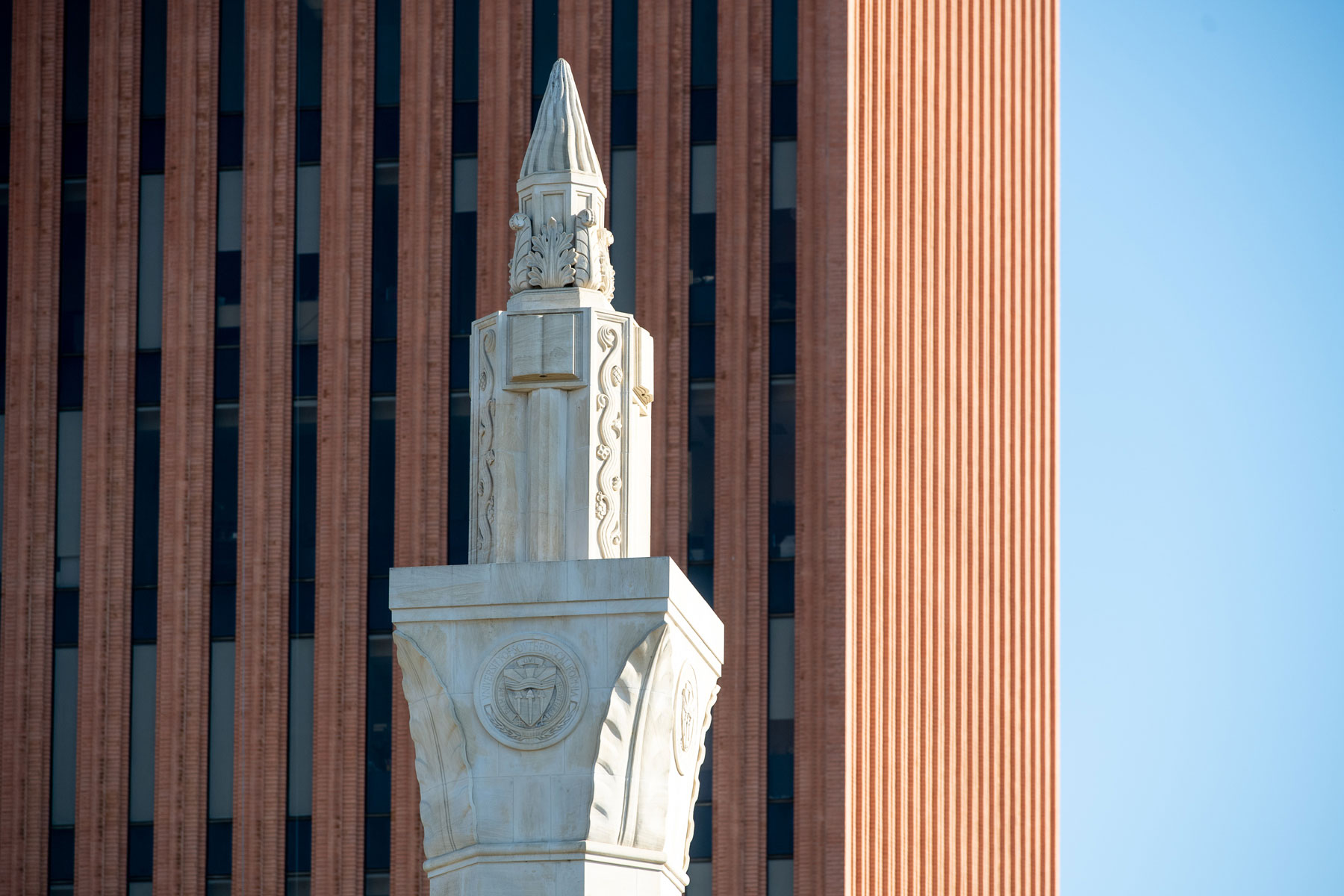 Members of the USC community call for a university centered around values and accountability. (USC Photo/Michael Owen Baker)

USC’s next president should have unimpeachable moral character and integrity, embrace meaningful community involvement and exhibit a deep commitment to transparent and accountable leadership.

That is the overarching message that USC faculty members, students, employees and other stakeholders emphatically shared with university leaders as the search for the institution’s 12th president continues.

During public listening sessions held at the University Park and Health Sciences campuses, the 23-member search committee of trustees, faculty representatives and other campus leaders sought input on the values and priorities that USC’s next chief administrator should embody. More than 500 people attended the three public forums.

USC presidential search committee members also gathered feedback during meetings with constituent groups including student government and organizations, Staff Assembly, Academic Senate, alumni representatives, school-level leadership boards, and neighborhood and community groups. Seeking public input is the first of five phases of the search effort, which USC Board of Trustees Chair Rick Caruso has vowed will be a careful and thoughtful process.

Although comments during the public sessions varied, from calls for a greater embrace of sustainability to demands for more mental health resources for students, the overwhelming majority of participants emphasized the need to restore a culture of compassion, morality and integrity. Many attendees said they viewed the presidential search as an opportunity to reclaim the core values of the university following troubling allegations of wrongdoing involving a former dean of the medical school and a former physician at the student health center.

They pressed leaders to find a president who values accessibility and accountability, ensures that all members of the Trojan Family have a voice in making decisions, and engages in regular and authentic interactions with students, faculty and staff members and others who have a stake in USC’s success.

During sessions with about 120 representatives of the student population, search committee members heard requests for a new president with a strong track record of changing cultures and promoting healing in the wake of discord or controversy.

Student leaders expressed frustration with the sense that university administrators are out of reach. At both the student-focused and open forums, they repeatedly and adamantly called for student representation on both the USC presidential search committee and the USC Board of Trustees.

They noted the rising costs of higher education and requested more robust financial aid packages, a topic raised by other attendees who encouraged efforts to grow the university’s endowment.

Student leaders also underscored the need to ensure that all groups are welcome at USC, regardless of race, creed, sexual orientation or other historically stigmatized identities.

Faculty members seek servant leader in mold of prior presidents

Members of USC’s Academic Senate, the representative body of the university’s faculty, shared their desire for a return to the style of university leaders like John R. Hubbard and James H. Zumberge. Faculty members argued that those prior USC presidents regularly made themselves available to professors, students and others, listening to their concerns and developing personal relationships.

USC has experienced impressive success in recent decades, faculty participants noted, climbing the national rankings and earning a reputation as a top-tier research institution. But they lamented that the university’s achievements in academic growth have come at the cost of its values.

USC’s new president should have solid listening skills, an impeccable moral foundation and the ability to lead a complex and decentralized institution, faculty members said. They also decried the university’s unwieldy bureaucracy and red tape, noting it takes several years to hire a senior faculty member due to lengthy approval processes.

Employees who spoke during the public forums said staff morale is at an all-time low, an issue exacerbated by the lack of a staff representative on the presidential search committee. They stated that employee input is rarely considered, despite the numerous responsibilities and tasks that staff members undertake to ensure the university operates smoothly each day.

One staff member argued that the Trojan spirit responsible for the university’s success has been lost in a recent emphasis on fundraising. Despite a highly successful endowment campaign, participants said employees have been told to cut their budgets and do more with less.

Participants said the university’s staff is willing and ready to be a part of efforts to guide USC into a successful future, but employees need a voice in the decision-making process.

Community members call for progressive and humble leader at USC

Search committee members also met with 40 civic leaders, who emphasized that the university’s next leader should be committed to engaging with local communities around its campuses. Neighborhood leaders called for a president in the vein of Steven Sample, who embraced the community during the civil unrest of 1992 and helped launch the Leslie and William McMorrow Neighborhood Academic Initiative, USC’s college access and literacy initiative.

Attendees described major concerns about the impacts of gentrification, particularly at the Health Sciences Campus. Issues of housing affordability and cultural changes have generated fear in community. Leaders requested more outreach and involvement to assuage concerns about what initiatives like a new biotech park will mean for local residents.

USC should prioritize local and minority-owned businesses when hiring or seeking vendors, participants said. Civic leaders described the need to modernize the USC Board of Trustees, ensuring that its members reflect the city’s diverse demographics and are open to hearing the concerns of community members.

Finally, community representatives encouraged USC leaders to build on past successes by enhancing community programs and seeking meaningful partnerships. They called on USC to serve as a civic role model by advocating for responsible growth, sustainability, transportation, public safety and economic development.

Next steps in USC presidential search

Efforts to gather public input are ongoing, and the search committee continues to accept online feedback regarding the ideal person to lead USC. The university has engaged two firms—Isaacson, Miller and Heidrick & Struggles—to identify and interview candidates who match the values expressed during the public listening sessions.

After a round of semifinal interviews, including extensive background and reference checks, the committee will recommend a final candidate to the USC Board of Trustees, which has final responsibility for naming the university’s next leader.

“The board recognizes that selecting our next president is not only historic and consequential, but it is also our most inviolable and solemn fiduciary obligation,” Caruso said in a message to the USC community in August. “This is a monumental moment for the future of our university, and we commit to this undertaking with the utmost faith, trust and confidence.”

The USC alumna and trustee talks about the challenges and opportunities ahead for the university, her plans as interim president, and a lifetime of breaking through barriers — but don’t call her a “pioneer.”

Carolyn Meltzer sees Keck School of Medicine of USC as uniquely positioned to lead the health care innovation with its academic excellence and diverse urban community.