The advantage of a transcatheter procedure is that it requires just a small incision in the side of the chest instead of opening up the entire chest at the sternum. It also avoids putting the patient on a heart-lung machine, which can be physically stressful, particularly on older patients.

While catheter techniques have been used for the replacement of aortic and pulmonary valves for several years, mitral valves have proved to be more difficult, and transcatheter replacements have only been attempted for the past year or so.

“We’re privileged to be a part of the cutting-edge group that’s doing the mitral work,” said Cunningham, an associate professor of clinical surgery.

The challenge is that the opening of the mitral valve is D-shaped rather than round, making it crucial that the replacement valve is an exact fit. Another potential issue is that any structure put into the mitral space can block the flow of blood from other valves.

The team solved the problem with exacting preparation, including the taking of comprehensive CT scans before the procedure, said Matthews, a professor of clinical medicine and chief of the Division of Cardiovascular Medicine. They then used the images to virtually drop the valve into place and make sure that it would be a precise fit. The candidate herself was also an important factor.

We say that people need two things to be a good candidate for a procedure like this: Love and drive.

“We say that people need two things to be a good candidate for a procedure like this: Love and drive,” Matthews said. “They need to have a support system and they need to want to do this.”

The patient, Billie Williams-Shaw, has both, including a close family of five children, 11 grandchildren and six great-grandchildren. And she knew she needed a change.

“I was always so tired,” Williams-Shaw said. “I couldn’t walk more than a few steps without getting out of breath. When I told my doctor I was really having problems, he told me he had done all he could do. So I thought about it for a while and I said ‘Well, Lord, it’s in your hands.’ And my doctor called me that very week and said there was someone he wanted me to see.”

Once they knew that the device would be a good fit for Williams-Shaw, the team prepared her for the procedure in just a few days. They made a small incision to place the catheter tube and then paced Shaw’s heart to 250 beats per minute.

“At that speed, the heart just flutters,” said Starnes, distinguished professor and chair of the Department of Surgery. “The pressure goes down to zero, so no blood is pushing through while you’re working. That way we can place the valve without the heart trying to force it out.”

The benefit to this approach is that there is no need to stop the heart, which can be arduous for the patient. But the brain can’t do without blood for more than a few minutes, so the team had to work quickly. After two weeks of planning, the operation itself was a relatively short one, requiring just 30 minutes to place the catheter tube and then another 20 minutes to place the valve.

During this new procedure, the replacement valve is guided through the catheter in a folded position. Once it is in place, the catheter is withdrawn and the edges of the valve are flared out to ensure that it completely fills the space and no blood can seep backwards around the edges. It’s a little bit like putting a model ship in a bottle with the masts collapsed, then raising them once the ship is in the right spot.

Shaw had no idea when she first woke up from surgery that she had just made a bit of medical history. 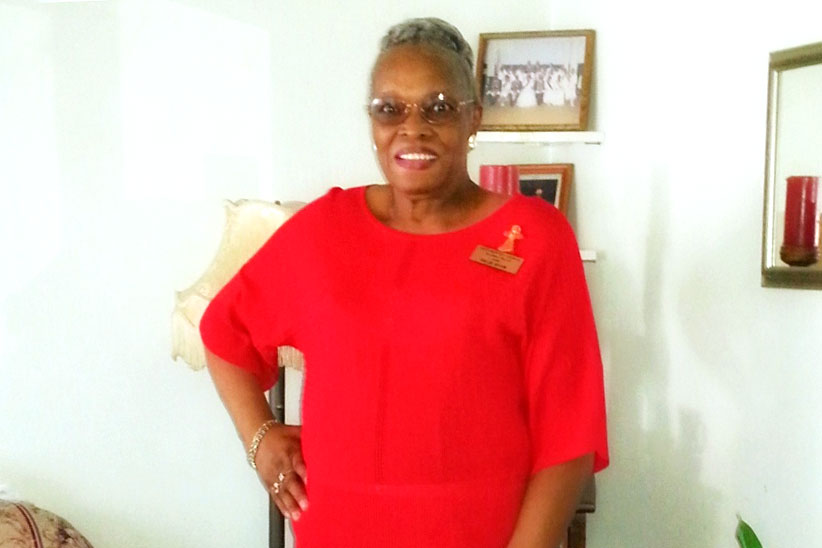 “They moved me out of the ICU and into this beautiful room,” Shaw exclaimed. “I said, ‘I know this must be for VIPs. Who’s the VIP?’ and they said ‘You are!’”

The effects of the operation were visible almost immediately, with Shaw able to sit up and eat dinner the same night.

“She came in in a wheelchair. We had her walking short distances the next day,” Starnes said. “She was completely out of heart failure overnight.”

Shaw was effusive in her praise for her doctors. “I’m so in love with all of them,” she said.

Shaw made sure to mention the care she got from research coordinator supervisor Stephanie Hiller Mullin nd research project assistant Christine Quesada, who helped her enroll in the clinical trial and prepare for surgery. “I want to take them home with me.”

Shaw, who spent 35 years as a nurse, was especially complimentary of her nursing team on 5 East. “I had such wonderful people taking care of me,” she said. “Paul [Kangethe] was so good to me. And David [Webster] went overboard. Everyone there was great, but [registered nurse] Anabel [Arreola] went way beyond. She was just there [for] my every need.”

The CVTI team found the surgery rewarding as well.

“It’s always interesting to do a completely new procedure,” Cunningham said. “This is a new step in the evolution of cardiac surgery and interventional cardiology.”

The chance to work in tandem with CVTI physicians in other divisions is also gratifying for the team. Starnes created the CVTI to foster exactly this kind of collaboration between different disciplines. “Valve replacements typically involve cardiac surgeons and cardiologists working together,” he explained. “It’s a front-row seat to appreciate the other physicians’ skill.”

Matthews agreed: “Cardiologists and cardiac surgeons have historically had a bit of a rivalry because we were seen as competing for the same patients. This has taken our relationship to a whole different plane. It has become a mutual admiration society. That’s good for everyone — especially the patient.”

The patient agreed. “I just thank God,” Shaw said. “Three months ago, there would be times when I couldn’t do what I wanted to do. This changed my life, my day, my everything. I’m feeling better! I can walk a little bit without getting out of breath. I can breathe.”

The CVTI team is still actively enrolling participants in this study. To find out if you qualify, contact:

Cardiovascular risk: Men and women now on equal footing, with both improving

The startup Moving Analytics helps patients learn how to manage their condition via a smartphone.

Researchers addressed the leading cause of death in the United States at the Los Angeles Area Cardiovascular Research Symposium and Research Award reception.