Ryan Bell is in a room full of atheists, agnostics and religiously undecided — dozens gathered inside a room at USC’s University Religious Center for a Sunday dinner hosted by the Secular Student Fellowship.

He does the same things a Christian or Buddhist chaplain might do. He’ll talk about life’s big questions — choosing what to do with your life, working through grief or how to mend a relationship. He’s around at secular activities such as these dinners or the group’s Monday meetings. He’s available for casual meetups, like a coffee or vegan lunch at Good Karma Cafe. 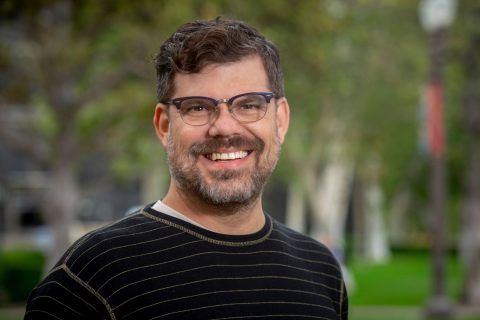 Ryan Bell left the Seventh-day Adventist church after a year of questioning his beliefs. His new fellowship helps students searching for meaning and who want to support good in the world. (USC Photo/Gus Ruelas)

Bell, known for his well-publicized blog A Year Without God, joined USC last year as the university’s second humanist chaplain. The first was Bart Campolo, another former evangelical, from 2014-2017. It’s a volunteer position, but it signals USC’s growing commitment to the secular students, which includes Trojans who identify as atheists, agnostics or humanists. Humanism is something Campolo cultivated at USC, co-founding the Secular Student Fellowship, which grew out of a former atheist club. He wanted to shift the dialogue away from debating religion and science and more toward making meaning and supporting good in the world.

When he made that shift, the group exploded, said USC’s senior associate dean of religious life, the Rev. Jim Burklo. Now, other student groups, including denominational, are emulating its culture of support and friendship, he said.

Bell’s appointment coincides with the hiring of Vanessa Gomez Brake, the first humanist to lead religion on a U.S. university.

It might seem odd, at first, that the Office of Religious Life is focused on supporting seculars, but they are its fastest-growing contingent. Roughly 4 out of 10 freshmen arrive on campus with zero affiliation to religion.

I’m missing a huge population of students if I’m only for theistic students.

“I’m missing a huge population of students if I’m only for theistic students,” said Dean of Religious Life Varun Soni. “We are trying to look 10 years ahead and think about how we can model the office of religious life of the future.”

For humanist chaplain, a long road

Coming to be secular isn’t always a straight shot; sometimes it’s a long road with a few bumps along the way. At least, that was Bell’s experience.

Bell grew up a devout Seventh-day Adventist. As a kid, that meant observing the denomination’s Sabbath, turning down a part in the school play or playing football or track since weekend extracurricular activities were off-limits, reserved for family and faith. He almost couldn’t walk at his own graduation, but his public high school changed it to occur before sundown on Friday.

After studying theology as an undergraduate, he went straight into pastoring, first at small churches in Pennsylvania. Then, in 2005, he was transferred to Hollywood. At the time, Bell was already starting to feel disconnected from his faith. Much of that was spurred by the aftermath of 9/11: Islamophobia was rampant. He heard President George W. Bush talk about God while asking for war, while the accused jihadists said they were sent by God.

“I started to think in my simplistic mind … these both can’t be right,” he said. “It came down to: God is on our team or God is on their team. It started me on a path of questioning.”

Secularism at a glance

Openness and curiosity about secularism are happening at the national level, too. More Americans claim to be more spiritual than religious, according to Pew Research Center. Compared to baby boomers, millennials are twice as likely to not affiliate with religion — 35 percent compared to 17 percent. If you asked Americans 40 years ago, barely 1 out of 10 admitted to atheism or agnosticism. Even the Harvard Divinity School, known for churning out future clergy, is supporting growing numbers of seculars, who are studying religious traditions to create community around the world — including a USC alumna and former president of the Secular Student Fellowship.

Maybe the move to Los Angeles would help, he thought.

“I wondered if a change of scenery and change in political landscape maybe make me feel like I fit more,” he said.

He turned the Hollywood church into a progressive outpost of the denomination. He was more interested in issues than filling pews, tackling the financial crisis and homelessness. He also supported LGBT congregants, even though Seventh-day Adventists were lobbying for the passage of Proposition 8, the 2008 initiative that aimed to make same-sex marriage illegal.

After nearly a decade, he was asked to resign.

“My boss finally said, ‘I don’t think you’re Seventh-day Adventist anymore,’” Bell said to the group of roughly 40 students at USC that Sunday. “I like to say I was the last person to figure that out. I was in denial about it.”

By that time, his marriage was falling apart. He was broke and sleeping at his dad’s house. He got a job tending bar at a brewery downtown.

While all this was happening, he realized he wasn’t turning to God. He decided to start the blog at the start of the year in January 2014. He had no idea it would catch fire as it did, receiving coverage from CNN, NPR and a documentary crew. He hung out with local atheists and went to the American Atheists National Convention in Utah. By the end of the year, he concluded he didn’t believe in God.

Reinventing himself as a humanist chaplain

Even though Bell never had a Plan B — he has a Master’s of Divinity and a doctorate in theology — he reinvented himself. He got a job at the homelessness nonprofit PATH, at one point dealing with the interfaith community he had known as a pastor. And then he got the position he has now, overseeing secular student organizing at universities across the United States for the Secular Student Alliance. The nonprofit plans to host its annual convention at USC this summer, another boon for its community at the university.

Bell, who now lives in an apartment in Pasadena and co-parents his two teenage daughters, knows what it is to like some parts about religion — like serving the community or supporting friends in crisis — but feel disconnected to the parts that require a certainty about the existence of God or scripture. He, along with Brake and Secular Student Fellowship, want students at USC to know there’s a place for them, too. 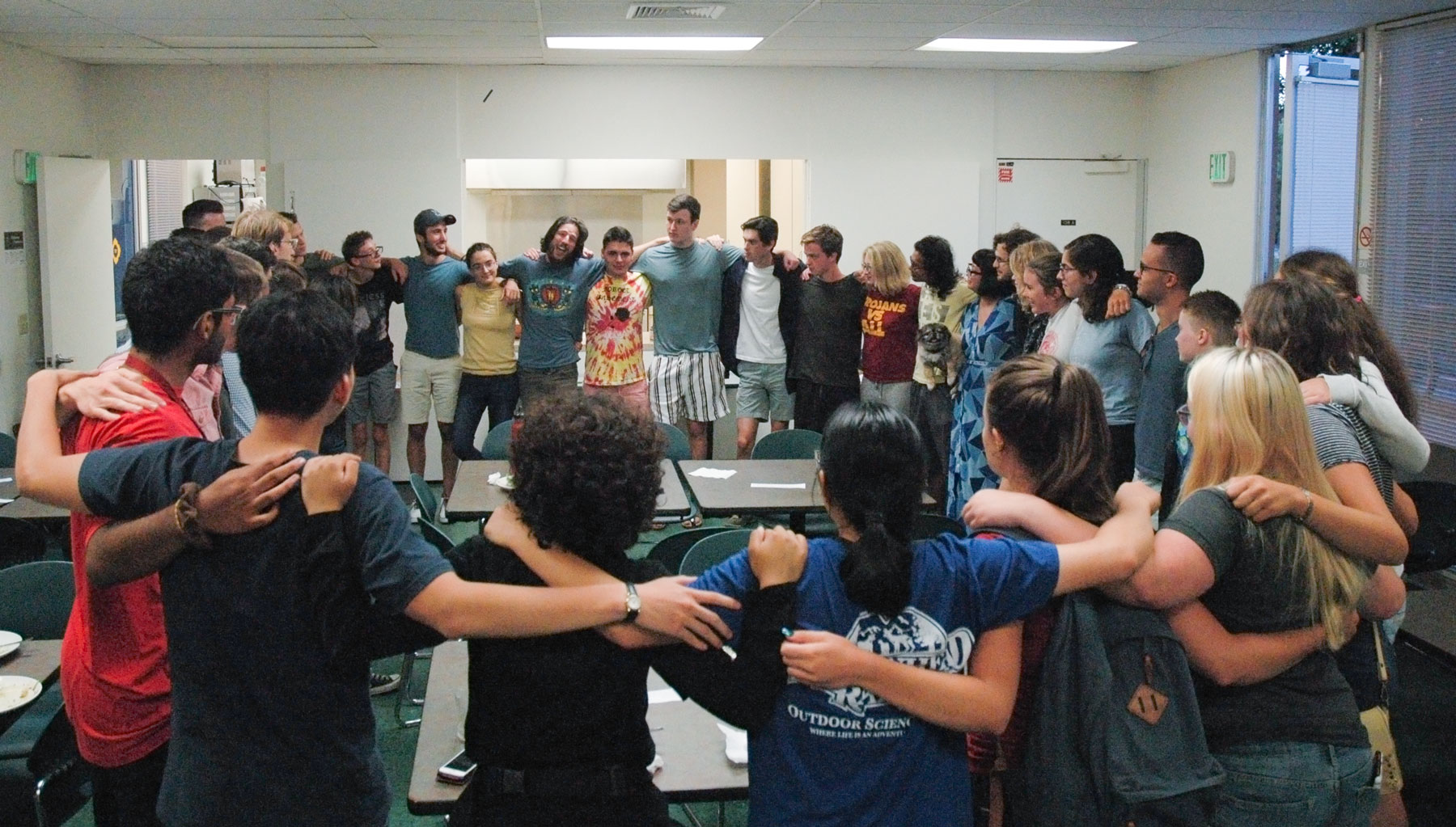 After Sunday’s dinner, Bell washes up his dishes in a kitchen in the back of the room along with the students. The rolled-up sleeves of his blue plaid shirt reveal a tattoo on his left forearm. It’s four letters in Hebrew and roughly translates to “here I am,” an idea of being present not just physically but emotionally for another person, he said.

He remembers getting it as a reward for finishing his doctorate at Fuller Theological Seminary in 2011.

Thinking back on it, he said: “I wanted to get a tattoo to mark the achievement of my doctorate, but I didn’t want it to be very Christian because — and I remember having this exact thought — I wasn’t sure how long I would be Christian.”

At USC — with nearly 100 student religious groups — the Office of Religious Life is as diverse as the student body.

Spirituality and Secularism Get Along at an Interfaith USC

College is a time of exploration, and USC has more chaplains and faith groups for spiritual introspection than any other U.S. university.

Are baby boomers returning to religion?

Many are increasingly turning to houses of worship to find meaning as they age.