When Kenji Inaba isn’t wearing standard-issue hospital scrubs as a trauma surgeon, you might find him sporting a different look — the dark-blue uniform of a Los Angeles police officer.

The Keck Medicine of USC doctor performs complex emergency surgeries and checks on patients for up to 80 hours a week at Los Angeles County+USC Medical Center, one of the nation’s busiest hospitals. But once a week, Inaba trades in his scalpel for a badge and gun as a sworn reserve officer with the Rampart Division of the Los Angeles Police Department.

Like any other uniformed officer, he trained at the police academy and patrols the city’s streets. But Inaba also serves as the LAPD’s first and only chief surgeon and provides advice to the department on medical training, health policies and treatment of injured officers.

Why would someone with an intense and demanding job as a trauma surgeon spend his valuable free time in a squad car? In a word: service.

“It’s very important for every person to volunteer. My parents instilled that in me from when I was a little kid,” Inaba said. “Becoming a reserve officer seemed like a great way to give what knowledge and skills I have as a surgeon back to the community.”

Most major police departments have a staff physician who provides guidance on medical issues. When the LAPD pitched the idea to Inaba, he was intrigued and eventually found a way to work the grueling training into his schedule.

First, he had to pass psychological and physical tests and an intensive background screening. Investigators contacted his family members, interviewed his neighbors and called references. Then he completed more than 700 hours of training in wide-ranging skills, including how to make an arrest, shoot and clean a gun, handle an unruly crowd and protect himself with basic self-defense moves.

“They were extremely thorough in the way they educated me,” Inaba said. Even though he is a highly skilled surgeon, he couldn’t skip the emergency medicine course. “I sat through every hour of that first-aid training. It goes to show you how seriously they take the process.” 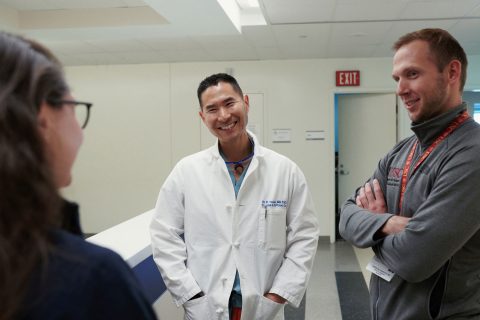 Inaba still juggles many responsibilities at USC, where he is a professor of surgery, director of the general surgery program and vice chair of the Department of Surgery at the Keck School of Medicine of USC.

He trains medical students, residents and fellows in trauma surgery and critical care. He also conducts research on topics like hemorrhage control and diagnostic imaging, contributing to more than 450 scholarly articles since 2003. And he regularly steps into the operating room to patch up injured patients and deal with other surgical emergencies.

“I feel like I’m a pretty good time manager,” Inaba said. “You kind of have to be to fit all of these things in.”

Inaba became a sworn peace officer in 2016 and completed his 400-hour probationary period. Now he rolls out with his regular partner, Ryan Nguyen, at least a few times every month. He patrols the streets of areas like Silver Lake and Echo Park in uniform, beginning a 12-hour shift at 6:30 a.m.

“You really can’t distinguish me from any other LAPD officer working that day,” he said. “We handle calls just like any other car.”

He struggles to pick a single experience or arrest that stands out from his time in the squad car. “Every call is unique,” he said. “And you take every call dead serious, even if you are just giving out a traffic ticket. Every move you make is with the safety of your partner and those around you in mind.” 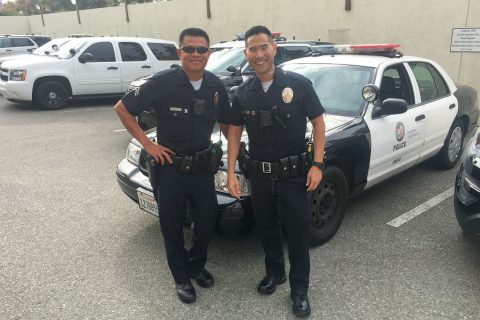 The responsibility of being in law enforcement has changed his mind set in many ways. Inaba is always aware of his surroundings, on and off duty. He can picture what likely happened in the frantic minutes before a stabbing or gunshot victim rolls through the doors of the LAC+USC emergency room.

He also has a greater appreciation for anyone who completes the rigorous academy training and works a full schedule as a uniformed officer.

“It is an extremely dangerous job, and they are some of the most down-to-earth, good people that you will ever meet,” he said. “You realize these are people who are committed to making the world and our city a better place. Every day, when they put on that uniform, they acknowledge and accept the fact that they may need to lay their life on the line to help someone they have never met before.”

Asked whether others should look into becoming a reserve officer, Inaba returned to the lesson his parents taught him as a child: Everyone should volunteer in their community.

For some, being a reserve officer might be a good fit, he added, although he cautioned that it takes a specific mentality to work in law enforcement. Officers must be able to work well with others, function in a high-stress environment and make decisions quickly.

“It’s not for everybody, and there’s no getting around the fact that there is risk,” Inaba said. “But for the right person, it’s so satisfying.”

A budding surgeon fascinated by the untapped potential of stem cells

Grad-to-be Mila Scheinberg mixes interest in medicine with a love of exercise. She also cooks and bakes healthy versions of desserts.

To serve and protect, USC trauma surgeon moonlights as a cop