As students return to universities each fall, excited freshmen make new friends and upperclassmen catch up with classmates. But for many students who transfer from a community college or other university, starting classes on a new campus can be disorienting and overwhelming.

At USC, that is changing, with more resources being dedicated to ensuring transfer students have access to a great education and the tools they need to succeed once they arrive on campus. And USC’s transfer students themselves are leading the charge.

More than 100 incoming transfer students signed up to receive advice and guidance this fall from current students who already navigated the transfer process. It’s part of a new peer mentorship program launched at USC this fall by the student-led Transfer Student Community.

Mentors and mentees meet at least every other week and talk about issues like interacting with professors, snagging the best study spot, scheduling a manageable course load or finding a good place to grab lunch before their next class. 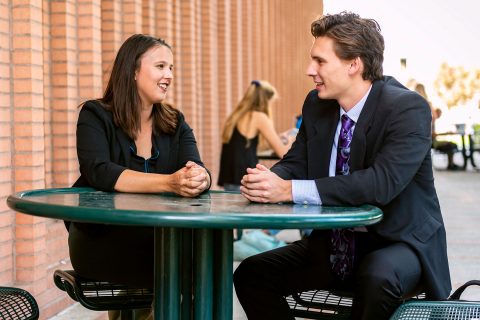 Enya Murray, a senior who transferred to USC last year and is now the Transfer Student Community’s president, said the group is planning events open to all transfer students, such as a career panel and a trip to the beach. The overarching goal is to help them feel comfortable and welcome in their new home.

Because transfer students often are older than the stereotypical undergraduate, they face a perception that they need less help settling into their new academic environment, Murray said. “But I felt like a freshman — ‘I have no idea what I’m doing, I’m on this huge campus with thousands of other students.’ And you feel like you aren’t supposed to feel that way.”

Through the Transfer Student Community, “we want to give people a place they feel they can go, hang out, meet new people — all that good stuff,” she said.

Having a mentor is already paying off for Anastasia Dzilno, who transferred to USC this fall after a year at the American University of Paris as part of the USC Trojan Transfer Plan. She was paired with Andrew Moradzadeh, a junior studying for the same degree as Dzilno — a bachelor’s in health promotion and disease prevention at the Keck School of Medicine of USC.

Each year, hundreds of transfer students enroll at USC. This class is no different. Here are the numbers for fall 2018.

Moradzadeh gave her suggestions on which classes to take, how to find her way around the Health Sciences Campus and the best places to eat and study. He also introduced her to a lab manager who hired her to help with clinical research.

“Three weeks in, and all of a sudden I have all these wonderful opportunities because of this extra connection,” Dzilno said. “I wouldn’t have been able to do that alone.”

She had been concerned about finding her place at USC. Although she grew up in San Jose, Calif., her parents are Russian immigrants unfamiliar with the U.S. higher education system, and they couldn’t offer much advice.

But with her mentor’s support, Dzilno now feels confident that she can not only complete her degree ahead of schedule, but also fit in a master’s degree in stem cell biology and regenerative medicine en route to medical school and eventually a career in neonatal care.

She also is already thinking about the next generation of transfer students.

“If one day they ask me to help out with this program, I’d be more than willing,” she said. “I’m already seeing the value.”

That’s a gratifying sign to those overseeing the initiative, including Nicholas Chapman, vice president of the Transfer Student Community. He worked with the previous vice president, USC alumna Veronica Richardson, to develop the mentorship program after struggling during his first semester at USC. He wants to ensure others don’t have a similar experience.

“I’m tired of hearing students tell me, ‘I dropped out of premed, I dropped out of law, I slept in my car,’” Chapman said. “I want to make sure their lives are relaxed and they can focus on what they want to focus on.”

There is certainly a large population to serve. This year, USC admitted 1,448 transfer students, an 11 percent increase compared to 2017. About another 500 students typically transfer to USC each spring. In comparison, all eight Ivy League schools combined to admit 1,479 transfer students in fall 2016.

It’s a point of pride for USC, which accepts more transfer students than any other private institution in the Association of American Universities. But it also means USC enrolls many students who may struggle to adjust.

David Glasgow, USC’s assistant vice provost for undergraduate programs and an adviser to the Transfer Student Community, acknowledged that many orientation programs and other resources are geared toward first-year freshmen. However, he said the university is deliberately expanding support for transfer students. That includes the popular TransferMation Series — workshops on topics like academic planning, study abroad programs and career opportunities.

“I just want transfer students to be aware that the university is there for them and we are thinking about different ways to help them get engaged on campus,” Glasgow said. “I think a mentor program is a good start, and we’ll see where this goes and make changes along the way to make it better.”

When he arrived at USC in January, Chapman was unsure of the courses he needed and the costs his financial aid would cover. He was commuting from Westwood, making it difficult to connect with new friends. He didn’t know he could earn a master’s degree while also pursuing his bachelor’s in neuroscience until a fellow student mentioned the university’s progressive degree programs. 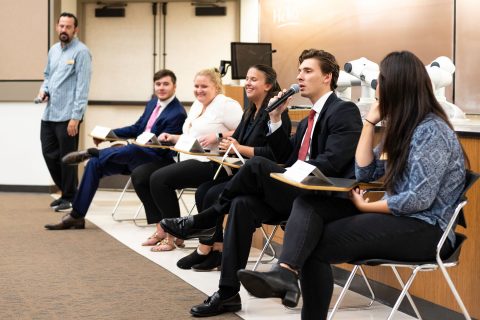 “I wasn’t told about certain opportunities, which made me feel a lot more crunched academically. It was stressful,” he said. “But that’s just how things are in life, and you have to overcome them. I did overcome it, and that’s why I’m helping other students.”

Chapman is encouraged by early signs of success with the mentor program, noting the number of students who signed up to either be a mentor or receive support has exceeded expectations. “People deserve guidance,” he said. “Until our goals are met, then we keep going.”

One challenge for transfer students is developing social ties because moving from a small college to a large university like USC might feel overwhelming at first.

Murray said she is lucky to be in a specialized major. Her choral music program at the USC Thornton School of Music has 16 students, which helped her make friends because they shared many classes. But she and other leaders of the Transfer Student Community are hopeful that the group will help transfer students in larger majors establish a network of friends who are dealing with common challenges.

Transferring credits can be a hurdle for incoming students

Another major complication for many transfer students is articulation — the process of gaining credit for classes taken at another college. University officials have to ensure that any class credits earned elsewhere are equivalent to similar courses at USC. It can be confusing because USC has dozens of agreements with other colleges related to transferring course credits.

A lot of my friends aren’t transfers, so they didn’t really know how to help.

It proved tough for Murray when she came to USC as a third-year student from the University of Redlands. She wants to graduate in two years and move on to a graduate degree program, rather than spending an extra semester or year trying to finish her major requirements.

Murray had to petition university administrators to get certain class credits accepted. She said having guidance from a student who had been through that process would have been helpful, and it’s an issue she hopes the mentorship program will address.

“A lot of my friends aren’t transfers,” she said, “so they didn’t really know how to help or what was going on or why it was upsetting.” 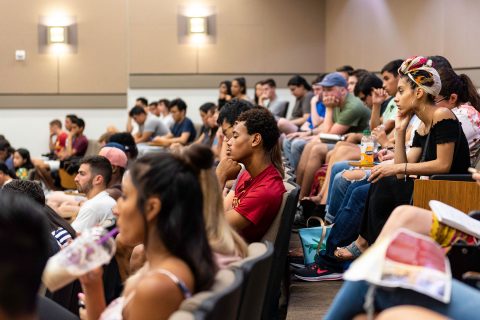 The Transfer Student Community offers support through a new mentorship program and events like this seminar for incoming transfer students. (USC Photo/Eric Lindberg)

Former transfer student has tips on how to succeed at USC

Adrian Trinidad knows about the difficulty of starting fresh at a new university. He came to USC from Los Angeles Trade-Technical College in 2013 to earn a degree in sociology. He commuted each day and parked far from campus.

“On my way to my car after a long day, I would see other students partying and having a good time,” he said. “It felt like, I’m not a part of this, I’m not having the same experience. It was a struggle, it was a hustle.”

It took a semester before he felt settled, but despite those early struggles, he found his way. He is now pursuing a PhD in urban education policy at the USC Rossier School of Education, where he also works as a research assistant with the Center for Urban Education. He studies how to help community college students from racially minoritized backgrounds transfer into four-year universities like USC.

Trinidad said the new peer mentorship program feels like a good way to start building support systems to smooth the transfer transition. He offered other advice on finding a groove at USC: Talk to professors, sit in the front of class, attend events and invite classmates to share a meal.

Because most transfer students will spend only a few years at USC, he also encouraged them to start planning early for the next stage of their career, whether that means applying for summer internships or researching graduate schools. Transfer students have to be strategic and work extra hard, he said, but it can pay off.

“To get the most out of this university, you have to be willing to feel uncomfortable,” Trinidad said. “I had a lot of challenges here, but I also had a lot of opportunities that I don’t think I would have had at any other school.”

A lack of support once held back a USC Marshall student, but transferring to USC changed the direction of her life.

Transfer student moves from L.A. Trade Tech to a PhD program at USC

Against tough odds, Adrian Trinidad makes the leap from a community college to the University Park Campus.