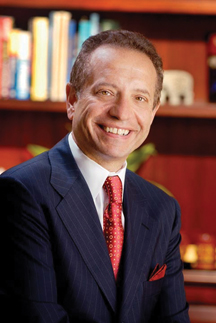 Carmen A. Puliafito, dean of the Keck School of Medicine of USC, has been appointed by Gov. Arnold Schwarzenegger to the Independent Citizens Oversight Committee of the California Institute for Regenerative Medicine (CIRM). The appointment was announced Oct. 24.

CIRM was established in early 2005 following the passage of Proposition 71, the California Stem Cell Research and Cures Initiative. The statewide ballot measure, which provided $3 billion in funding for stem cell research at California universities and research institutions, was approved by California voters on Nov. 2, 2004, and called for the establishment of a new state agency to make grants and provide loans for stem cell research, research facilities and other vital research opportunities.

The Independent Citizens Oversight Committee (ICOC) is the 29-member governing board for CIRM. The ICOC members are public officials, appointed on the basis of their experience earned in California’s leading public universities, non-profit academic and research institutions, patient advocacy groups and the biotechnology sector.

The mission of CIRM is to support and advance stem cell research and regenerative medicine under the highest ethical and medical standards for the discovery and development of cures, therapies, diagnostics and research technologies to relieve human suffering from chronic disease and injury. To date, the CIRM governing board has approved 229 research grants totaling more than $614 million, making CIRM the largest source of funding for embryonic and pluripotent stem cell research in the world.

Since 2007, Puliafito has served as dean of the Keck School of Medicine of USC, holder of the May S. and John Hooval Dean’s Chair in Medicine, and professor of ophthalmology and health management at the Doheny Eye Institute. He is a member of the California Medical Association, American Association of Ophthalmology and Association for Research in Vision and Ophthalmology.

From 2001 to 2007, he served as director of the Bascom Palmer Eye Institute and chair of the Department of Ophthalmology of the University of Miami Miller School of Medicine.