Representatives of USC and the USC Marshall School of Business joined with IPADE, the largest business school in Mexico, and the consul general of Mexico in Los Angeles on Thursday to sign a collaboration agreement establishing a business lecture series to promote understanding in business, economics and finance.

The agreement calls for a business lecture to be delivered annually, alternating between Los Angeles and Mexico City. It aims to contribute to the exchange of knowledge and friendship among the two universities, the public sector, the business community and investors from both countries. 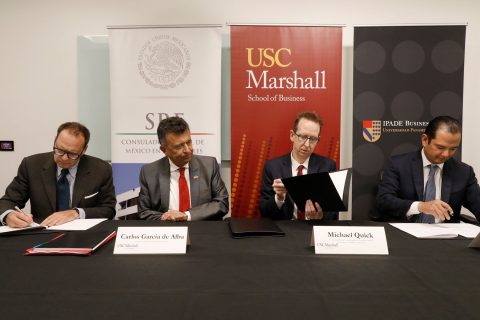 “Megacities such as Los Angeles and Mexico City will be drivers of economic opportunity and social change in the 21st century,” USC Provost Michael Quick said. “This agreement is a reflection of how critically important education and partnerships in and between those cities will be for our future.”

The consul general of Mexico, Carlos García de Alba, who has been an active facilitator of the academic exchanges between Mexico and Los Angeles, suggested that the business lecture will also be a channel to provide better and more extensive information to business decision makers.

“Public policies that impact the business community need to be supported by scientific knowledge in order to contribute to the creation of wealth and well-being in our countries,” he said. “I am delighted to play a role in facilitating the partnership between these two outstanding institutions.”

“What is very clear,” he said, “is that when you invest in education, it leads to growth.”

An extended version of this story appears on the USC Marshall website.

The school announces its full-time MBA Class of 2020 is 52 percent women — a first for top-tier business schools.

USC business professors explain how to succeed on the world stage.

Julian Leuthold credits his success to an open-minded approach when first visiting India, the country that has become a second home.