Even as today’s media industry faces unprecedented financial upheaval and fallout from “fake news,” USC’s efforts to educate the next generation of storytellers are only growing stronger.

At the USC Annenberg School for Communication and Journalism, students have countless opportunities to learn how to become globetrotting reporters, trusted public relations experts, creative social media influencers — or whatever the changing communication landscape brings next.

“We’re situated in a moment in the history of communication that could not be more vibrant,” said USC Annenberg Dean Willow Bay. “It’s a moment that has us facing an unprecedented amount of innovation and disruption and an increased centrality of the role of communication and all its disciplines.”

To ensure its scholars are prepared to excel in that dynamic setting, USC Annenberg has boosted access to internships and travel programs, recruited a new slate of top scholars and researchers, and expanded community outreach efforts that encourage local teens to consider a career in media. 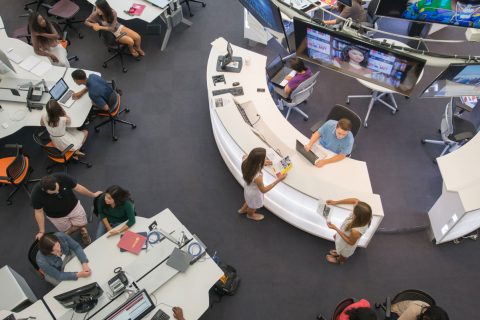 Perhaps the most visible example of the school’s commitment to the future is its gleaming home, Wallis Annenberg Hall. The 88,000-square-foot building, made possible by a lead gift from the Annenberg Foundation, opened in 2014 and is a physical manifestation of the school’s embrace of the latest innovative approaches.

Students receive training in new media technologies and promptly put those skills to use in the building’s dedicated media center. The ultramodern newsroom brings together audio, video and text across platforms, forming a lively hub for student-led journalism, communications and public relations projects.

Wallis Annenberg Hall’s forward-looking design is part of the school’s broad recognition of the need to prepare its students for ongoing disruption in the communication field. And although aspiring storytellers certainly need to be well-versed in the latest tools of the trade to excel in today’s demanding media environment, Bay sees another skill as equally critical to their future success.

Embracing change is key to success for future storytellers

“We’re living through a lot of upheaval, so the idea is to become comfortable with continual change,” she said. “Some people liken it to riding a bike. The motion of pedaling gives you a stability and grounding that you don’t have on a bike at rest.”

The shifting media landscape is forcing USC Annenberg to adapt and embrace flexibility as well. To help the school and its graduates remain at the forefront, Bay is leading an overhaul of eight master’s programs. She already helped erase the divisions among print, broadcast and digital journalism in a revamp of the undergraduate journalism program in her previous role as director of USC Annenberg’s School of Journalism. Professors underpin the journalism curriculum with fundamentals like ethics and critical thinking.

It’s that combination of this rigorous foundation, fluency with these new tools and comfort with change that allows them to go on and lead the industry.

“That provides our students with a strong foundation to go off and explore and experiment with new ways of storytelling, new tools and techniques, and new ways of examining and assessing the communication they see around them,” Bay said. “It’s that combination of this rigorous foundation, fluency with these new tools and comfort with change that allows them to go on and lead the industry.”

Students are also encouraged to embrace experiences beyond the walls of the university. The average USC Annenberg undergrad has three internships, and Bay wants to keep expanding those opportunities, which are backed in part by the school’s Student Success Fund. Donors who support this fund ensure that more students can afford to go on organized educational visits to leading media companies like Google and The New York Times.

USC Annenberg students have interned with NBC Sports during the Winter Olympic Games in South Korea and spent a week embedded with a local newspaper in Utah to learn about journalism in rural settings. They also collaborated with local radio station KCRW to tackle controversial issues like deportation and immigration during a virtual reality reporting project in Tijuana. Financial support helps make those career-boosting internships possible.

Bay said a parallel effort emphasizes diversity and inclusion. Thanks to a dedicated endowment fund for community engagement, USC Annenberg regularly brings in high school students from surrounding neighborhoods and beyond to explore potential career paths in media, including through an intensive summer youth academy.

A separate fellowship and scholarship program, funded by a $5 million gift from the Annenberg Foundation, supports journalism students and young professionals who are underrepresented in the news industry, public relations and other communication professions. “We have a massive opportunity to leverage our expertise in this space to help add much-needed diversity to all of these industries,” Bay said.

The school is also using its bolstered endowment to establish new forms of student aid, like an emergency fund to cover unexpected financial difficulties. Bay cited the recent case of a student from the British Virgin Islands whose tuition was covered by government funding. When Hurricane Irma devastated the island territory, its government had to shift that money toward the emergency response and rebuilding efforts.

“That student was going to have to leave, but we were able to tap into our emergency fund,” she said. “That’s something we would have previously done our best to accommodate, but we would have been scrambling to find that little bit of money.”

Many donations have been earmarked for faculty support as well, such as a new chair in cultural communication supported by an anonymous $3 million gift. That type of funding helps the school recruit top scholars like award-winning editor Christina Bellantoni, who recently joined Bay’s new senior leadership team as a professor of professional practice and director of the school’s media center.

“Our parents, alumni and friends have been exceedingly generous,” Bay said. “Our Annenberg community is excited about supporting the next generation of scholars and professionals in these fields, and they continue to provide us and our students with extraordinary opportunities.”

These ongoing investments are an encouraging sign for Bay as she enters her second year as dean. It gives her confidence that the school will have the resources it needs to maintain its reputation for producing well-trained media professionals.

“I’m proud of our graduation rates and our employment statistics because I think they are reflective of the richness of the academic experience here, but also the robustness of the professional opportunities our students have,” she said. “This is a place that is thriving and filled with a sense of optimism and extraordinary possibility.”

Los Angeles-area students learn about careers in communications, journalism and multimedia during a monthlong summer academy.

The accomplished educator has played a prominent part in developing and teaching a wide range of courses that explore rhetoric, debate, political communication, propaganda and global media.

The renowned scholar is acclaimed for bridging his scholarship as a cultural historian with the curation of exhibitions, installations and public humanities projects with diverse organizations.