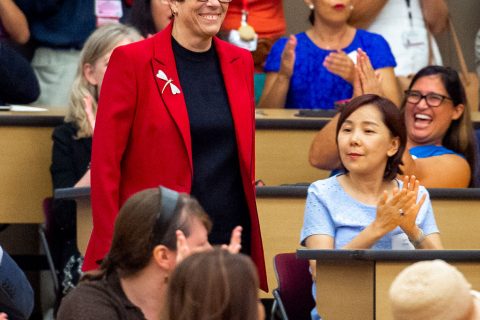 Laura Mosqueda was formally installed as dean of the Keck School of Medicine of USC on Thursday. She has led the school as dean since May 1, after being appointed interim dean in October.

She is the first woman to lead the Keck School of Medicine since it was established in 1885.

Mosqueda is an accomplished physician, researcher and expert in geriatric medicine, family medicine, and elder abuse and neglect.

“I’ve always had a real affinity for older adults, even as a little kid,” Mosqueda said in an earlier interview with USC News. “Part of it, I’m sure, is because I had wonderful grandparents.”

Her parents were influential on her as well: Both earned undergraduate degrees at USC and completed their training in medicine at the university’s medical school, as Mosqueda did in 1987.

Before her appointment as interim dean, Mosqueda was associate dean of primary care at the school and chair of the Department of Family Medicine. The Keck School of Medicine alumna joined the school’s faculty in 2014.

Laura Mosqueda fights for social justice and cares for vulnerable populations as she leads the Keck School of Medicine of USC into a new era.

Grants from the National Institutes of Health and U.S. Department of Defense will support basic and pre-clinical research to develop therapies for cartilage degradation.