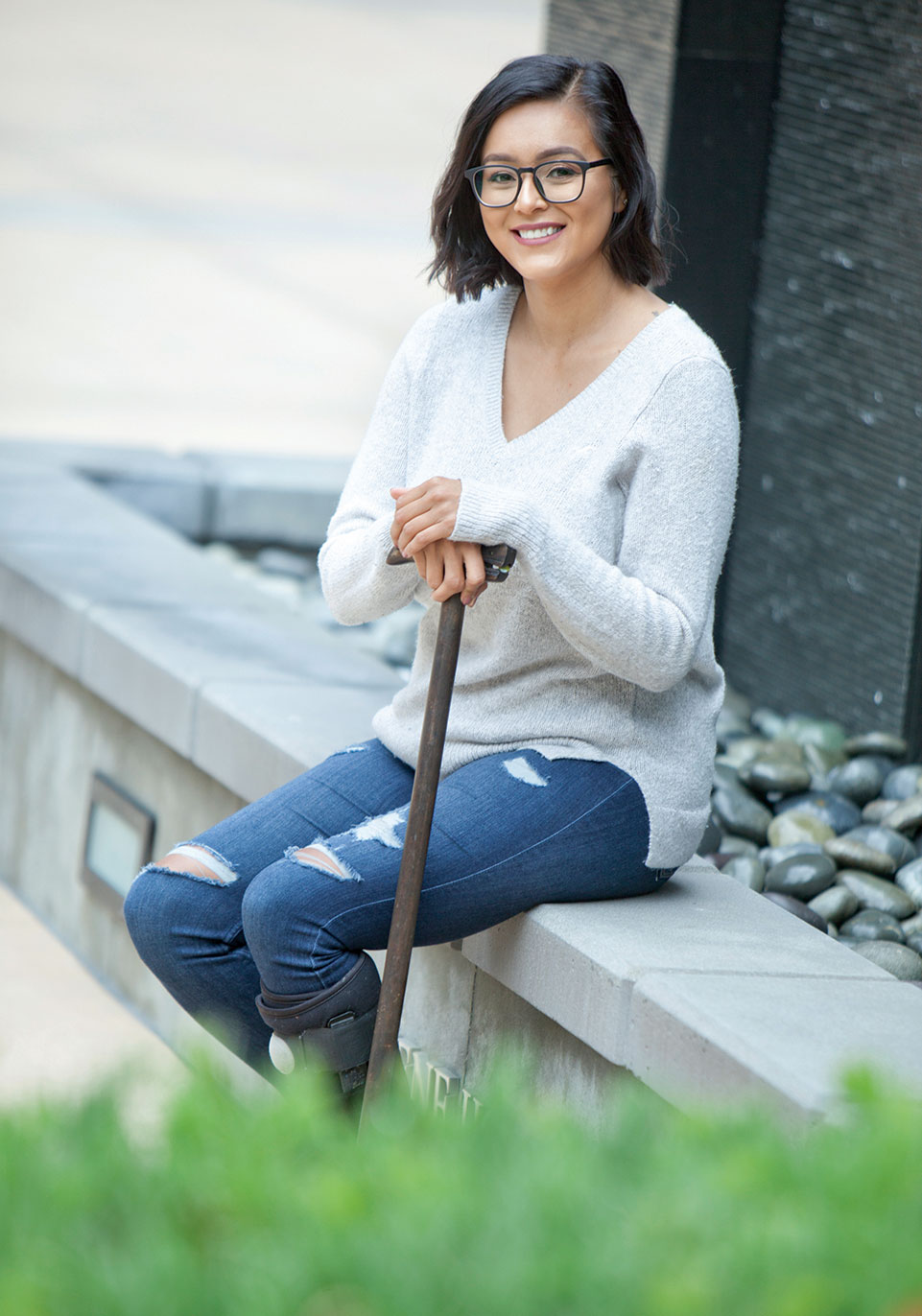 Sandra Robles got help from USC occupational therapists after she was diagnosed with juvenile rheumatoid arthritis. (Photo/John Skalicky)

Living with rheumatoid arthritis sidelined Sandra Robles for nearly two decades. Now, thanks to the right medication and occupational therapy at USC, she’s ready to get back to the business of life.

Sandra Robles, then 16, showed her pediatrician who thought she had probably only bumped her hand.

But then unbearable pain began to set in — first, in Robles’ inflamed knuckles, then in her feet. Suddenly, it was difficult for her to accomplish everyday tasks like opening doors, getting dressed and even walking.

It all culminated late one night when the teen got up out of bed to use the restroom. Barely able to walk, she stumbled onto the toilet and fell asleep.

“My mom awoke me the next morning before she went to work,” Robles said. “She was like, ‘What is wrong with you?’”

Another trip to the pediatrician and a referral to a rheumatologist confirmed that Robles had juvenile rheumatoid arthritis, a disease that affects 50,000 children in the United States.

Living with rheumatoid arthritis: the body attacking itself

Rheumatoid arthritis (RA) is an autoimmune disorder in which the body mistakenly attacks its own healthy tissues, including the membranes lining joints. The inflammation can eventually cause deterioration and destruction of bone and cartilage, creating excruciating pain and deformities.

“Even when you’re not moving, it just hurts,” said Robles, whose condition progressed to affect her left knee, elbows and shoulders.

What followed was a deluge of drugs as doctors searched for the right medications to relieve Robles of her daily pain.

The process can take years and, through trial and error, ended up sidelining Robles from some of life’s major milestones. For example, she never learned to drive and was forced to drop out of college, where she was studying animal science, after just one year.

Occupational therapists are trained to look at the big picture.

“Occupational therapists are trained to look at the big picture,” Valasek said about the value the profession can bring to primary care. “We might see contributing environmental triggers or behavioral patterns that physicians may not have the time to investigate.”

One day a week, Valasek, an assistant professor of clinical occupational therapy at the USC Mrs. T.H. Chan Division of Occupational Science and Occupational Therapy, does rounds with two to four USC family medicine physicians, taking part in appointments and offering occupational analyses for patients.

“I scan their charts and, based on their diagnoses and narratives, will identify those who look like they might benefit from occupational therapy,” Valasek said.

The therapy can be as short as a 10- to 15-minute intervention, during which Valasek will help the patient identify and replace unhealthy daily habits, or as long as recurring appointments at the USC Occupational Therapy Faculty Practice.

The partnership proves advantageous to patients who benefit from the trained eyes of two different professionals looking at health from two different perspectives.

A new outlook toward living with rheumatoid arthritis

Seeing how much she was struggling, Robles’ physician connected her with Valasek, who treated Robles for about eight months. During one of her first sessions, Robles made a list of all that she hoped to accomplish through occupational therapy.

“One of my biggest issues was my energy level,” Robles said. “The fatigue brings you down. You get depressed because you want to do things, but you just don’t have the energy.”

Valasek helped Robles devise strategies to make better use of her limited energy.

The two focused on Robles’ most strenuous activities and how she could modify them to save energy — for example, using a wheeled laundry basket to save her from carrying one.

Valasek also coached Robles to create healthy daily routines like eating healthfully, getting enough sleep and, most importantly, asking for help from her family when she needed it — a tall order for the fiercely independent Robles.

Though she experienced a setback earlier this year, Robles said she’s feeling great.

“She seems more confident now, knowing she can manage her energy and can get things done,” Valasek said. “She went from thinking she might not ever be able to work again to thinking one day she might get a job.”

A longtime animal lover, Robles dreams of running an animal sanctuary. And for the first time in years, it’s a dream that could be within reach — thanks to the comprehensive health care she received at Keck Medicine.

“I was able to talk to Sam about anything, and she helped a lot,” Robles said. “More than anything, she taught me to see beyond my RA diagnosis and have a whole new outlook on life.”

Grants from the National Institutes of Health and U.S. Department of Defense will support basic and pre-clinical research to develop therapies for cartilage degradation.

The promise of a new molecule means patients could opt for a shot to heal their injury, USC Stem Cell scientist says.

By studying zebrafish, Joanna Smeeton seeks ways to treat a person’s aversion to cold and pain.