Walking around at the Electronic Entertainment Expo — commonly known as E3 — gamers stopped in their tracks when they came upon Gabriela Gomes’ booth.

The video game convention draws industry juggernauts like Playstation and Xbox, but Gomes’ booth was a little different. 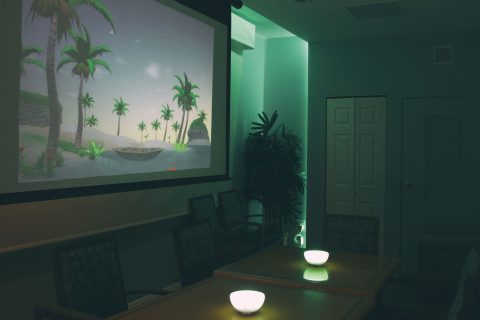 There were no controllers or consoles. And there was no use of the latest in VR or AR, like so many of the surrounding booths at the Los Angeles Convention Center.

Healing Spaces is simple — all you need is an iPad, a TV, Hue lights and speakers. And it’s aimed at adults with dementia and Alzheimer’s disease.

“I didn’t expect that this kind of work would be an E3 thing,” said Gomes, who graduated in May with an MFA from the USC School of Cinematic Arts. “People would pass by and be like ‘Oh, what is this?’”

Gomes’ MFA thesis project is a multisensory experience created to help adults suffering from neurodegenerative diseases to relax and connect with their caregiver.

Just pick a scene in the app — either a forest scene or a beach scene — and you’re transported there, not just visually but also with smells, sounds and feeling: The Alzheimer’s video game Healing Spaces includes a sensory box with items to touch. For the beach, there are things like sand or lotion that smells like sunscreen, which can be used by the caregiver to massage their hands. With the forest, there’s aromatherapy that smells like pine trees.

Multisensory rooms have traditionally been used with children to help them relax in places such as medical settings. But there’s no reason the concept can’t be applied to populations like those dealing with Alzheimer’s disease, according to USC occupational therapist Leah Stein Duker, an expert in multisensory experiences.

Millions with disease could benefit from Alzheimer’s video game

Currently, 5.7 million Americans are living with Alzheimer’s, and that number is expected to double to 14 million by 2050, according to the Alzheimer’s Association. Adults dealing with declining cognitive function might connect to another person in a different, nonverbal way — perhaps through touching or listening to music or smelling something pleasant.

Gomes was able to do a pilot study of the app while interning for the Front Porch Center for Innovation and Wellbeing, which runs 10 retirement communities in California. She was able to give the app a test run at its memory care community in Pasadena, mostly focusing on practicality — would caregivers use it?

Once the first resident came in for the first session, we were just completely blown away.

“Once the first resident came in for the first session, we were just completely blown away,” said Megan Park, a project coordinator for Front Porch.

Caregivers found it easy to set up. They also found their clients reacting right away.

Park remembers one resident whose arms and hands were tensed up and contracted. Her caregiver gave her a hand massage with the beach lotion.

“She smelled the lotion and started to open her eyes. Her hands and arms started to relax,” she said. “By the end of the experience, she was just sitting normally.”

Not only could this experience be beneficial for adults with Alzheimer’s, maybe relieving agitation, but it could also be relaxing for caregivers, who are often family members who might not have the time or ability to take a break, according to Donna Benton, research associate professor at the USC Leonard Davis School of Gerontology. 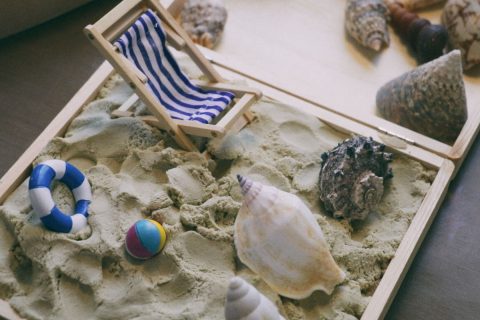 Healing Spaces does not rely on a console or gaming controller. Instead it uses senses of touch, sound, and smell, to transport the viewer. (Photo/Courtesy of Gabriela Gomes)

Stein Duker pointed out that Healing Spaces is also unique in that it curates a whole experience — transporting the user to a place with distinct characteristics. It’s a modern take on the multisensory rooms of the past, which had visual, auditory or tactile elements that weren’t related to each other.

Stein Duker, who works with kids with autism and studies children in hospital contexts, thinks Healing Spaces could be applied to work with all types of communities.

“I think what is really great about the platform Gabi has developed is that it’s very common sense,” Stein Duker said. “You could see it in schools for kids with disabilities. You could see it in hospitals for difficult health care procedures. I think it’s exciting.”

Gomes plans to do a second pilot of the Alzheimer’s video game Healing Spaces, with continued mentoring from Stein Duker, Benton and Marientina Gotsis, who runs the USC Creative Media & Behavioral Health Center.

“If it’s successful here of course we would want to implement it possibly at all of our communities,” Park said.

Healing Spaces ended up in Paste Magazine’s Top 10 games at E3. It also was one of six finalists in a challenge put forth by design firm IDEO to create for family members caring for someone with dementia.

All this recognition gives Gomes a vote of confidence.

“They started telling me very personal stories of their grandparents with dementia,” she said of gamers stopping by at E3. “There was a demand. I sort of felt like I needed to take this further. I can’t just stop now.”

Japanese raisin tree’s leaves may help USC researcher in the fight against Alzheimer’s, Parkinson’s, PTSD, anxiety and other conditions.

Research will address the neglected role of environmental neurotoxins in the development of Alzheimer’s.

Why people become more prone to distraction with age

A specific network in the brain may be to blame, according to a USC-led study on stress.

Mitochondrial DNA and nuclear DNA: Not so independent after all

A game like no other: Healing Spaces targets Alzheimer’s, dementia patients