Laura Mosqueda wants the Keck School of Medicine of USC to get back to basics.

As the medical school’s new dean, she is emphatically calling on physicians, researchers, staff members and students to re-embrace the values and purpose in research, education and delivery of health and health care.

“The bottom line that I tell everyone is we’re all here to make the world a better place,” said Mosqueda, an authority on geriatrics and family medicine. “That’s what we need to focus on.”

She assumed the school’s top position earlier this year, after serving as interim dean since late 2017. That means overseeing more than 4,150 full-time and voluntary faculty members, nearly 2,000 staff members and 1,200 students.

In addition to training more than 900 medical residents in an array of specialties, the school also boasts a major basic and clinical research enterprise. It ranks among the top 30 medical schools in the U.S. in research funding from the National Institutes of Health, garnering more than $150 million in 2017. Its faculty physicians see more than 1.5 million patients a year across Keck Medicine of USC facilities.

And as the nation increasingly emphasizes integrated and coordinated medical care and the importance of primary care and prevention, Mosqueda’s background and holistic focus come at the right time for the Keck School of Medicine.

When it comes to educating future doctors, “we have to get back to the basics,” Mosqueda said. “If we don’t pay attention to the basics, we are going to be built on a shaky foundation.”

Dean seeks a strengthened focus on principles of medicine

For Mosqueda, that in part means promoting what she calls “social justice” throughout the school’s education, research and clinical care programs. It’s a broader idea than simply helping vulnerable populations, such as older adults (her own specialty) or people experiencing homelessness. It’s about ensuring equity and equality across the profession of medicine.

We have to get back to the basics. If we don’t pay attention to the basics, we are going to be built on a shaky foundation.

That message resonates with many of the school’s faculty members, students and staff members, she said, because they served as its inspiration.

“The idea of social justice is something I’ve put into words, but it didn’t really come from me,” Mosqueda said. “It came from listening to everybody here. It’s one of the reasons I wanted to become dean because I kept hearing that message.”

In practice, a social justice approach might involve combating the damaging effects of unequal access to health care, improving societal attitudes toward aging or embracing a culturally competent approach when working with diverse members of the community.

It feels like a natural fit with Mosqueda’s personal values, which stress the inherent worth of all people, regardless of their circumstances. It’s a lesson she draws from her past, growing up in a USC family with strong roots in compassionate care.

Early experiences instill value of service to others

As a child raised in the Fairfax area of Los Angeles, Mosqueda gained insight into the medical profession thanks to her parents. Both earned undergraduate degrees at USC and completed their training in medicine at the university’s medical school.

Her mother, Gloria Frankl, specialized in radiology and became a pioneer in the field of mammography. Her father, Harold “Hal” Frankl, focused on gastroenterology and was the chief of his division. Although both worked for Kaiser Permanente throughout their careers, the Frankls regularly volunteered at the Los Angeles County+USC Medical Center.

“When people find out my maiden name, they’ll say, ‘Oh, your father is the best teacher I’ve ever had,’ or tell me about some way that my mother influenced their lives,” Mosqueda said.

They didn’t push their children to pursue a similar career. But Mosqueda and her brother, now a pulmonary and critical care specialist in Alaska, embraced medicine anyway. Mosqueda’s early interest in marine biology gave way to veterinary medicine. By college, she had moved to human medicine. She earned her undergrad degree in biology at Occidental College, then her medical degree with a specialization in family practice from USC in 1987. 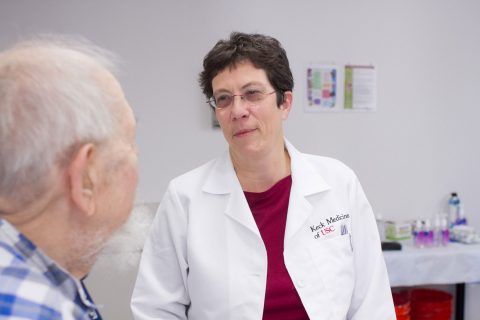 Mosqueda is an expert in the field of geriatrics and directs the National Center on Elder Abuse. (USC Photo/Ricardo Carrasco III)

She liked the philosophy behind family medicine, including its acknowledgement of the psychosocial and spiritual aspects of care. In her first week of medical school, Mosqueda connected with Ken Brummel-Smith, a family physician and geriatrician who became a lifelong friend and mentor. He encouraged her to take fellowship in geriatrics, and she was hooked.

“I’ve always had a real affinity for older adults, even as a little kid,” Mosqueda said. “Part of it, I’m sure, is because I had wonderful grandparents.”

Although she was inspired by her relationship with her grandparents, Mosqueda has built her career around a darker side of aging: elder abuse. Older adults often develop chronic conditions, dementia and related illnesses that place them at high risk of mistreatment.

About half of seniors with dementia experience some form of abuse, she said. Sometimes a caretaker yells at them. Others are physically assaulted or become victims of theft or financial mismanagement. Mosqueda has led landmark studies on markers of abuse and neglect and established the first forensics center on elder abuse, a model since replicated across the country.

She is continuing her research with a major new grant from the National Institute on Aging to explore factors that lead to elder abuse, in part by understanding the relationship dynamics between caregivers and people with dementia. She is hopeful the collaborative effort with colleagues in gerontology and social work will yield valuable information to inform prevention and early intervention efforts.

Mosqueda also directs the National Center on Elder Abuse, a federally funded initiative that provides information to guide policy, research, training and resources. Her expertise has earned invitations to testify before Congress and visit the White House to discuss elder justice issues.

In addition to promoting well-being among older adults, Mosqueda is focused on another underserved population with serious health challenges: homeless people. In her previous role as associate dean of primary care and chair of family medicine, she helped launch a street medicine program with colleagues like Kevin Lohenry, director of USC’s physician assistant program.

The initiative brings multidisciplinary teams of health providers to the streets to provide direct patient care and social services to unsheltered and hard-to-reach homeless populations. As critical as those efforts are, Mosqueda sees opportunities to extend the program beyond offering medical services and referrals.

She envisions medical students specializing in care for homeless people. Researchers might use neuroimaging to study whether differences in brain structure might influence risk of homelessness. Scholars could compile nationwide data to reveal socioeconomic and community factors that might guide prevention and mitigation strategies. 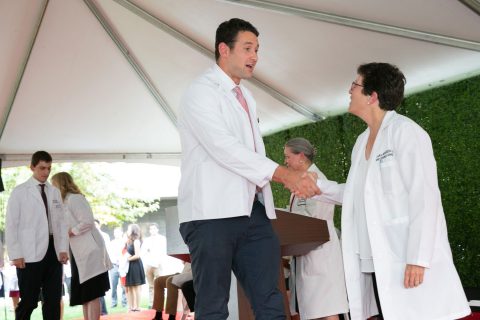 “We are an academic medical center, so we want to go beyond starting a street medicine program,” she said. “How do we layer research and education onto that?”

Mosqueda also wants to turn this focus on social justice inward, continuing to push the Keck School of Medicine to diversify its ranks. Although the school is close to achieving gender parity among its students, she sees a need to advance that goal among residents and faculty physicians, to ensure USC’s medical enterprise reflects the diverse communities it serves.

Although it’s not something she dwells on, Mosqueda broke a major barrier when she became the first female dean in the medical school’s 133-year history. She had many strong female role models growing up, including her mother, so it didn’t feel unusual for her to assume a top leadership position.

“I think I’m just starting to realize that now I am one of those role models,” she said.

As part of her push for social justice, Mosqueda wants to promote community projects and volunteer opportunities for the school’s students, staff members and physicians. She encourages collaborations across the medical campus and university as a whole, inspired by the interdisciplinary efforts at a student-run clinic that she helps oversee at a local homeless shelter.

She also continues to make house calls, providing care for patients with degenerative illnesses. A 20-minute house call can eliminate the lengthy ordeal of visiting a medical facility for someone in their 90s with Alzheimer’s disease.

“Having an MD after your name — you’ve worked hard for it, but it’s also a privilege that opens doors in your community,” Mosqueda said. “We all carry a responsibility to do something good with that.”

The first woman to lead the school is an accomplished physician, researcher and expert in geriatric medicine, family medicine, and elder abuse and neglect.