Having shown the power of an ancient Chinese hangover remedy, Research Professor of Clinical Pharmacy Jing Liang is now determined to unlock the mysteries of its effectiveness. The answers she finds could lead to potential Alzheimer’s disease treatments and treatments for Parkinson’s, post-traumatic stress disorder, anxiety and more.

“In China, we have so many medicinal herbs,” said Liang, who moved to the U.S. in 1997 after earning her medical degree and PhD at Tokyo University School of Medicine. “I thought, what if some of them worked for alcohol-use disorder?”

So she took a leave of absence from her position in an alcohol-research laboratory to return to her native country, devoting three months of study in Guangzhou, South China, where she purified various herbs and evaluated their effects on animals.

Potential Alzheimer’s disease treatment: the power of a hangover-fighting tea

Liang alighted on Hovenia dulcis — the Japanese raisin tree — the leaves of which were first brewed into a hangover-fighting tea around 660 BC. She identified its active ingredient, dihydromyricetin (DHM), as a novel anti-alcohol medication in a landmark 2012 study. Not only does DHM seem to prevent the next-day fog that is the inevitable price of over-indulgence, but it also demonstrates liver-protective properties.

After reading about Liang’s research, former Tesla engineer and entrepreneur Sisun Lee contacted her for help in formulating a recovery drink for commercial release. With Liang as medical adviser, Lee established the company 82 Labs, releasing the popular Morning Recovery supplement. 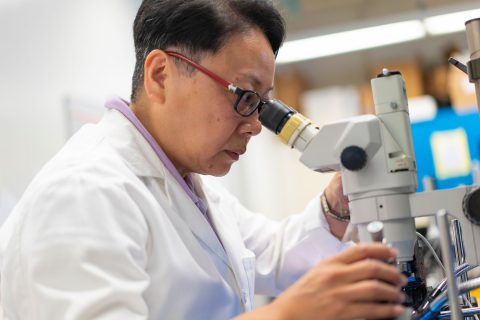 For Liang — who joined the USC School of Pharmacy in 2014 — the research enabled a return to what led her to the medical profession in the first place: an interest in neurodegenerative diseases and aging.

“The GABA receptor must have something to support,” Liang explained. “And this support layer is the gephyrin protein.” In Alzheimer’s patients, that protein is reduced by half, resulting in what she calls “the silent synapses” — signals come but find no response. “That is how cognition is lost,” she said.

Liang has identified the gephyrin-GABAA-receptor pathway as a target for a potential Alzheimer’s disease treatment involving DHM, and her discovery holds potential for combating other neurological disorders as well.

“For example, she has great anecdotal evidence for DHM’s potential effectiveness against Parkinson’s disease,” said Daryl Davies, a professor in the USC School of Pharmacy’s Titus Family Department of Clinical Pharmacy who is collaborating with Liang on this research. He added that DHM also might prove useful in treating anxiety, alcohol-use disorder and PTSD. Another advantage is that, unlike current anxiety and alcohol-withdrawal medications such as diazepam, DHM is non-addictive.

To date, DHM has been used in the U.S. only as a nutritional supplement, with its pharmaceutical applications yet to be fully explored and validated through evidence-based research. Morning Recovery’s growing popularity demonstrates DHM’s effectiveness as a recovery drink that can reduce or eliminate the “rebound effect” alcohol has on your brain. Now USC researchers aim to understand why it has that effect.

“We want to know how DHM protects the liver,” Davies said. “Does it reduce the level of the toxins, acetaldehyde? Does it speed up metabolism of ethanol? Dr. Liang has anecdotal data that it does both, but now we want to understand the mechanisms behind its effectiveness.”

As the team undergoes the process of what Davies calls “reverse engineering” DHM, they have a crucial head start. “We know these products are safe for long-term use because she has done the safety and toxicity studies already,” he added.

A weakness of Chinese traditional medicines is that they’re hard to replicate.

“A weakness of Chinese traditional medicines is that they’re hard to replicate,” Davies explained. “People understand that the location where wine grapes or coffee beans are grown makes a difference in flavor and quality, but they don’t seem to understand the concept when it comes to medications. They think, ‘I can get DHM from China and put it into anything. Or I can grow Hovenia anywhere.’ But you have to understand how and where it was grown, how it was harvested, and then ensure quality and batch-to-batch consistency. What are the active ingredients and how are they administered?”

The USC studies will control for all of those aspects.

In the meantime, Liang has created another supplement, called Smarto-OneTM, that is undergoing a small-scale clinical trial for Alzheimer’s in China. Those who have taken the supplement have shown significant improvement, she said.

The potential is enormous.

“If her product works for Alzheimer’s — even if it helps people’s quality of life by 20 percent — that’s a lot more than what’s out there right now,” Davies said. “And it’s something that can be administered at a reasonable cost.”

A gene variant responsible for vascular damage to the brain is a promising new target for drug therapy to fight Alzheimer’s disease and other neurodegenerative diseases, according to research published in Nature.

Researchers at the Keck School of Medicine of USC have uncovered structural clues about the protein linked to Parkinson’s disease, which ultimately could lead to finding a cure for the degenerative neurological disorder.