The Los Angeles Memorial Coliseum is rarely quiet. But these days, as the stadium’s $300 million renovation project progresses, the noise of crowds has been replaced by the distinctive sounds of construction. 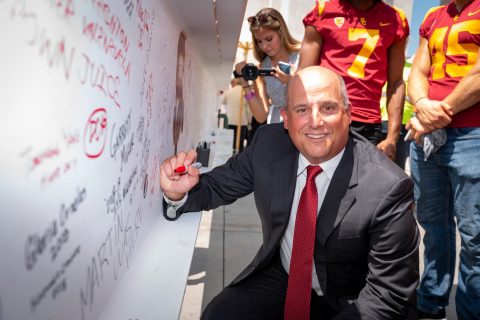 But those construction noises were replaced by the sounds of celebration Wednesday as USC joined the community in marking the halfway point of the Coliseum renovation project, which will restore the stadium to its former glory and add world-class amenities. The ceremony’s highlight: The final beam, signed by Trojans, friends of the university and L.A.-area dignitaries, was lifted into place atop the new Scholarship Tower superstructure.

The construction noise won’t stop until renovations are complete in fall 2019, but it will be interrupted by USC Trojans and Los Angeles Rams home games during the 2018-19 football season. USC is overseeing the Coliseum renovation; the facility is jointly owned by the state, the county and the city of Los Angeles but managed and operated by USC under a 98-year lease that extends through 2111.

“We’ll keep working through football season,” said Jeff Moe, on-site manager of construction for the USC project. “We’ll actually be moving even faster, possibly bringing on more crews, toward the end of the year. We just won’t be operating on game days.” The first: an exhibition game between the Rams and the Oakland Raiders on Saturday. USC’s first home game of the year is Sept. 1 against UNLV.

With 172,000 hours of labor already completed, the project is generating hundreds of construction jobs for workers who live nearby.

Under an agreement with the Los Angeles-Orange County Building and Construction Trades Council, 30 percent of the labor was to be done by local workers. The project has doubled that, thanks in part to an extensive community outreach. 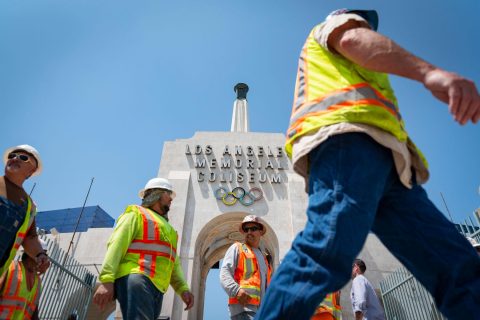 “We brought all the stakeholders together,” said Theodora Oyie, senior manager of community engagement for Hathaway Dinwiddie, the project’s managing general contractor. “That includes subcontractors, union, jobseekers and community organizations. We’re seeing the benefits of that now.”

Workers who live within five miles of the project make up 18 percent of the construction workforce. An additional 33 percent live in the city of Los Angeles. Overall, 60 percent of Coliseum renovation workers reside in L.A. County.

All work is being done by union members, and jobs pay living wages with benefits.

Some, like Aaron Beasley, came to the job with no construction experience. He’s now an apprentice with the Carpenters Union.

“I’ve worked in restaurants, retail and warehouses,” said Beasley, 23. “Those were jobs, but now I’ve got a career.”

Expecting the unexpected during Coliseum renovation

Work began in January, with demolition on parts of the Coliseum. Soil that hadn’t seen daylight since 1923 was dug up, as 46,000 cubic yards of dirt were hauled away.

Coliseum renovation by the numbers

Moe never knew what to expect as excavation progressed around the old stadium.

“Back then, they ad-libbed,” he said. “If they figured out they needed a wall or a footing that wasn’t in the plans, they added it as they went along.”

Moe and a team of contractors stayed nimble, jumping in with ideas when the unexpected got in the way.

“Everybody was proactive,” Moe said. “They’d present solutions, we’d bring in extra crews and get through it. That’s kept us on schedule.”

The skeleton of the seven-story Scholarship Tower crowns the stadium’s south side. It will house new catering and cooking facilities, concessions, lounges, suites and press boxes.

The project has already consumed 2,131 tons of steel and 1,740 tons of rebar. Moe said hard work and heavy equipment pushed the tower skyward at full speed.

“We brought in two tower cranes,” he said. “We didn’t have to do that, but it allows us to work both the west side and the east side at the same time. For a while we were running double shifts, six days a week, and we might go back to that.”

The field, home to Trojan football since the stadium opened, was converted into a staging area for heavy equipment and demolition debris. That space, right in the middle of the project, gave crews the flexible, accessible space they needed to get things done. For months, the normally lush field was covered in 16 inches of gravel. It’s now back to its traditional green turf.

“This isn’t just about construction and restoration,” Moe said. “It’s about jobs that benefit the community. The Coliseum has been a crown jewel for South Los Angeles for a century. Going forward, we want to see it continue to benefit the neighborhoods that surround it.”

From tailgating to traffic, here’s everything you need to know as USC football gets underway

As the team heads into Saturday’s opener against UNLV, learn about tailgating permits, construction impacts and more.

Armed with tools of their new trades, local men and women bring energy and high spirits to long-awaited restoration of the legendary landmark.