The rhetoric in Hollywood may be changing when it comes to inclusion, but the numbers are not, says a new study out Monday on diversity in popular films. As The Spy Who Dumped Me and Crazy Rich Asians gear up for their box office launches, the investigation suggests that these films are a departure from the film indjustry’s status quo.

The report, from Professor Stacy L. Smith and the Annenberg Inclusion Initiative at the USC Annenberg School for Communication and Journalism, reveals that progress toward inclusion remains to be seen among top movies with regard to females, underrepresented racial/ethnic groups, the LGBT community and individuals with disabilities. 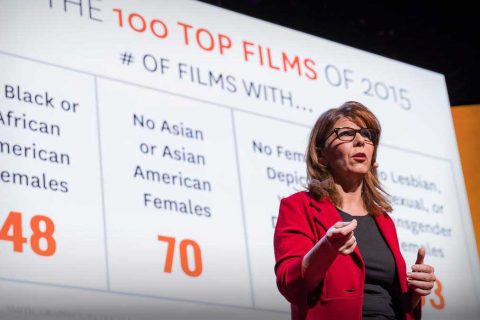 Stacy Smith talks about her research on diversity in Hollywood. (Photo/Marla Aufmuth, TED)

The investigation is the most comprehensive and intersectional look at film and examined 48,757 characters in 1,100 top films from 2007 to 2017.

“Those expecting a banner year for inclusion will be disappointed,” said Smith, founding director of the Annenberg Inclusion Initiative. “Hollywood has yet to move from talking about inclusion to meaningfully increasing on-screen representation for women, people of color, the LGBT community or individuals with disabilities.”

A look at who is driving the story shows that 33 of 2017’s 100 top films had a female in a leading or co-leading role. Four of these females were from an underrepresented racial/ethnic group. These findings represent no change from 2016.

Lack of diversity in Hollywood: Behind the camera, too

“The lack of inclusion on screen is matched and exceeded by the exclusion behind the camera,” Smith said. Across 1,223 directors over 11 years, 4.3 percent were female, 5.2 percent were Black or African-American and 3.1 percent were Asian or Asian-American.

The report also examines how characters are depicted on screen, with a focus on parents, relational partners, age, and sexualization. Consistent with previous years, female characters were more than twice as likely as male characters to be shown in sexually revealing clothing, partially naked or referenced as attractive. Teenage (13–20) and young adult (21–39) females were equally likely to be sexualized in films from 2017.

“Good intentions are not enough to create change,” Smith said. “Hollywood needs tangible, actionable solutions that will usher in real transformation. Our work brings to light the steps that companies and individuals can take if they want to see results.”

The study is the latest from the Annenberg Inclusion Initiative, which produces an updated report annually.

An extended version of this report appears on the USC Annenberg website.