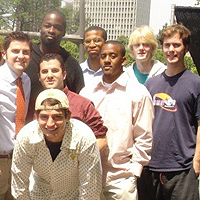 About 15 men at USC have been visiting fraternity houses, men’s sports teams and other men’s groups on and off campus to talk about the ideas and attitudes people have of sexual assault in college life.

The Men Care project, which recently received a Department of Justice grant renewal, has been going strong since fall 2005. It grew from a partnership between the USC Rossier School of Education and USC Student Affairs in an effort to arm college male culture with tools and knowledge that can prevent an assault before it happens.

Prevention education fads began with self-defense training for women, which was more like intervention than prevention and created a misperception that assaults are being committed by strangers. Three-quarters of such assaults actually involve acquaintances.

In the 1990s, there was a shift toward co-ed discussion groups. But these had the unintended effect of making men feel like they were under attack and being treated as potential perpetrators of women.

Men Care targets college men only, and it teaches guys the patterns frequently observed in sexual assault cases and how to stop an assault as a bystander before it can start.

“They talk about what to do as bystanders and how to recognize red flags in the behavior of their peers,” said Todd Henneman, program director of Men Care. “They go through different scenarios and make lists of ideas so students leave with a menu of choices for what to do.”

The workshops are coupled with a social marketing campaign of posters around campus to reinforce healthy behavior and increase the likelihood men will speak up if they see something awry, such as a guy pressing a girl to drink or leaving a party with a drunken girl.

In some cases, there are misunderstandings about even the definition of sexual assault. For instance, there is the false belief it only happens when there is a weapon.

Sundt said the psychology and behavioral profile of the undetected sexual assault perpetrator has been detailed in the research of colleagues David Lisak and Steve Thompson, which helped to inform her work for Men Care.

The profile is one of a very social guy who is often with clusters of other men. He goes out with the goal having sex in mind and seeks the path of least resistance as he prefers not to be violent.

Once he targets his victim, he works to get her as drunk as possible while he remains relatively sober and alert. His aim is to get her away from the crowd and alone. He considers himself not a predator but simply taking advantage of a situation.

It is this man and his telltale behavior the young members of Men Care aim to help their peers identify and curtail.

Sundt conducted pre-surveys and post-surveys of all the men who participated in Men Care workshops to gauge how their attitudes and knowledge about sexual assaults changed, with follow-ups one to two years later to measure its lasting effects.

The peer educators are men across USC from all majors who reach out to college males at their own campus, the nine Los Angeles Community College District campuses and Mount St. Mary’s College. Recent funding will expand the program to include the district attorney’s office and to tackle the issue of stalking in college as well.

A few tips to stop questionable behavior without being confrontational, courtesy of USC Men Care:

� Join the conversation. Become the third wheel.
� Ask them what’s going on. That may be enough.
� Distract the couple. Take one of them to “see” something.
� Track down one of the woman’s friends and suggest that she check on her friend.
� Talk to the woman and ask her if she wants help.
� Tell the guy that the woman seems too drunk and suggest that he get her number and call her later.