Food, rent, utilities, gas and other necessities — the costs can pile up quickly for college students over the summer months. That often means turning down unpaid internships that could help them narrow down their interests or give them a critical edge when they start their job search.

Taking unpaid positions can be especially challenging for those interested in the nonprofit and government sectors, which typically have less money to offer paid internships for students.

Provided through the USC Career Center, the program awards funding to undergraduates who secure an unpaid summer internship with a government agency or nonprofit organization.

“Dream Dollars is really important, because for a lot of my friends, money is a barrier between them and their dream internship,” said Rachel Krusenoski, a student at the USC Price School of Public Policy. “They get so excited about an internship, but then they find out it’s unpaid. Money is a big issue, especially if you are trying to stay in Los Angeles over the summer.” 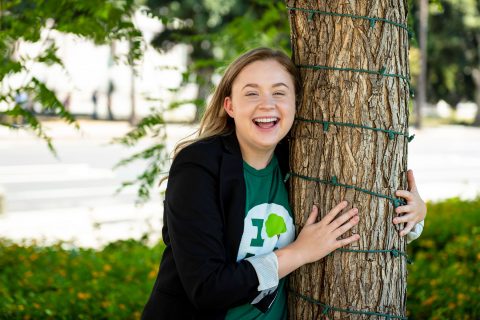 Rachel Krusenoski is majoring in urban studies and planning with a specialization in environmental policy and planning. (USC Photo/Eric Lindberg)

She speaks from experience. Krusenoski started working with City Plants as a community engagement volunteer in January as part of a two-unit internship class at USC. The public-private partnership brings together the city of Los Angeles, local nonprofits, businesses, schools and other community groups to provide free trees to city residents and hold tree-planting events, with a focus on neighborhoods with less shade canopy.

It was the perfect fit for Krusenoski, who is completing a major in urban studies and planning with a specialization in environmental policy and planning and a minor in environmental studies. But as the end of the semester neared, she didn’t think she could afford rent and other living expenses if she continued working during the summer as an unpaid intern. That’s when she found out about the USC Dream Dollars program.

“We were looking into funding options so I could stay on, but it’s a nonprofit and every dollar, every penny counts,” she said. “The scholarship made things easy for everyone.”

Now in its 11th year, the initiative has provided $1,500 awards to about 115 Trojans. Recipients have landed internships with nonprofits like the Make-A-Wish Foundation and City of Hope and government divisions like the U.S. Department of Education.

“These are service-minded students who want to give back to the community in some way,” said Lauren Opgenorth, the career center’s associate director of internships and experiential education. “As an educator, it’s great to see so many people with such passion. That energy and determination is inspiring.”

The scholarship initiative is funded through the career center’s Partner Program by companies that come to campus to recruit USC graduates. In exchange for perks like early registration for career fairs, they pay membership fees that support programming at the center, including USC Dream Dollars and other scholarships for first-generation college students who secure unpaid internships.

“We want those funds to go directly to our students so they can pursue something that will add value to their degree and give them some hands-on experience,” Opgenorth said.

For Krusenoski, her internship with City Plants was crucial to figuring out her academic direction and career path. She had changed her major three times as she searched for the right fit for her interests in environment, policy and communications. The internship uncovered her passion for community engagement and organizing.

I haven’t really had this feeling of doing good and seeing the good I’m doing with any other internship I had before.

“I love the people and what we are doing,” she said. “I haven’t really had this feeling of doing good and seeing the good I’m doing with any other internship I had before.”

Beyond helping students explore potential areas of interest, researchers have found that internships during college can be a valuable way to build connections and real-world experience before graduating.

Students with more internships under their belts are more likely to find a job or be in graduate school within six months of completing their degree, according to a report by the nonprofit NACE Center for Career Development and Talent Acquisition.

Kennedy Reese is well aware of the importance of internships to her future success. That’s why the USC Price student sought a summer position volunteering with Kamala Harris during the candidate’s successful 2016 campaign for a U.S. Senate seat.

To pay the bills, however, Reese took a part-time job and ran an online business, leaving her stressed and burned out. “The main reason I was working so much was because I couldn’t afford to just do an internship,” she said. 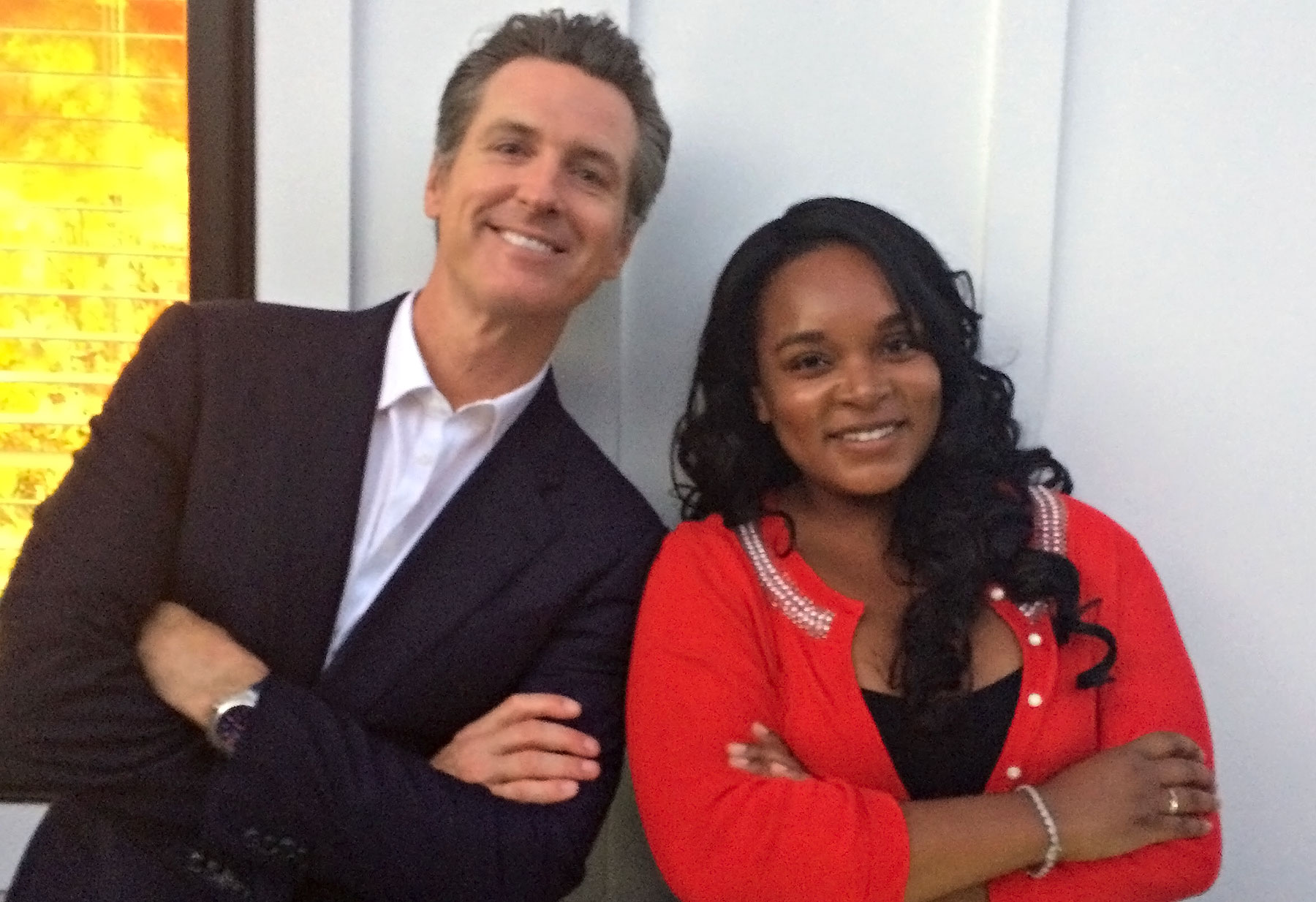 Students like Kennedy Reese previously had to work multiple jobs to afford the opportunity to take an unpaid internship. Reese is a now a finance intern with Gavin Newsom’s gubernatorial campaign. (Photo/Courtesy of Kennedy Reese)

So when she earned another unpaid spot with Gavin Newsom’s gubernatorial campaign this summer, Reese immediately started looking for scholarships so she didn’t have to drive for a ride-share service or find another part-time gig to earn money.

USC Dream Dollars helped fill the gap. Although she works a few hours each morning at the USC Center for Black Cultural and Student Affairs, she dedicates much of her day to finding and vetting potential Newsom campaign donors as a finance intern.

“I chose fundraising because I think it’s critical when it comes to the viability of a candidate, especially when you’re talking about women, people of color or nonestablishment Democrats,” she said. “I have a vested interest in making sure the right people are elected and can communicate their policy effectively.”

Reese graduates next spring with a bachelor’s in policy, planning and development, along with a master’s in public policy through USC Price’s progressive degree program. She wants to stay involved in politics, and she sees herself potentially running for office in her hometown of Chicago to give back to her community.

Some college students step onto campus with a clear vision for their future and a sense of which internships will help them achieve their career goals. That wasn’t the case for Roxanna Barboza.

The first-generation college student knew she wanted to find a way to support her hometown of Lost Hills, Calif., a small farming community northwest of Bakersfield. But it didn’t dawn on her that learning about telecommunications might be the answer until a recent visit to her family.

When she dropped into her younger brother’s room to say hello, Barboza found the high school senior typing away furiously on his cellphone. He was writing an essay for a class and would have to send it to a friend by phone to submit to the teacher because the family had no internet access at home.

Barboza had dealt with similar challenges during high school. Her parents would risk their jobs by taking time off to drive her somewhere with an internet connection so she could send in homework assignments. The experience inspired her to pursue an internship this summer with the Federal Communications Commission’s Wireline Competition Bureau in Washington, D.C. She hopes to gain knowledge about community development, including strategies to expand internet and communications infrastructure to rural areas like California’s Central Valley.

Last year, she interned with the U.S. Department of Education and depended solely on the USC Career Center’s First-Generation Scholarship to cover her cross-country flight and room and board. This year, Barboza received USC Dream Dollars funding and support from USC Price through its Graduate Student Internship Fund.

“I’m going to be honest, it was hard last summer just depending on one scholarship,” she said. “This year, I’m blessed to have both of these scholarships to help me achieve my goals and explore my interests.”

Barboza’s responsibilities this summer include reviewing reports on wire, satellite and cable communications initiatives such as efforts to expand broadband internet access. She expects that knowledge will be valuable when she completes her bachelor’s in public policy and master’s in public administration next year. Barboza hopes to land a job with an internet service provider focused on policy and advocacy, with an eye toward improving broadband access and promoting rural development.

“Before I came to USC, I never would have thought I could have an internship in the government sector,” she said. “These experiences have allowed me to achieve higher dreams than I ever would have expected.”