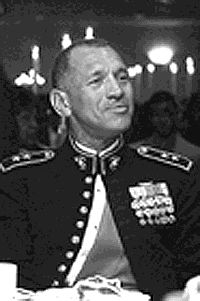 CHARLES F. BOLDEN JR., a marine and former astronaut, was honored with the highest distinction bestowed upon a USC alumnus on March 27 at the USC Alumni Awards Dinner.

Bolden (MS ’77), a prominent military commander and history-making astronaut, was given the Asa V. Call Award.

“Major General Charles Bolden is an accomplished marine, aviator, astronaut and a person who enthusiastically supports this university and its values,” said USC president Steven B. Sample.

“He embodies the Marine Corps motto – Semper Fidelis, always faithful. He has been ‘always faithful’ to his country, his community and to his alma mater.”

Bolden began his career as a second lieutenant in the U.S. Marine Corps following his graduation from the U.S. Naval Academy in 1968. He flew more than 100 sorties into North and South Vietnam, Laos and Cambodia while assigned in Nam Phong, Thailand.

Selected as an astronaut candidate by NASA in 1980, Bolden qualified as a space shuttle pilot astronaut in 1981. He flew four historic missions, including the first joint American-Russian space mission in 1994. He left NASA later that year to return to active duty with the Marines as deputy commander of midshipmen at the Naval Academy. When he retired in October 2002 after 34 years of service, he received a certificate of appreciation from President George W. Bush and a Distinguished Service Medal.

Bolden also received the USC Alumni Merit Award in 1989. In1984 he was recognized as an Outstanding Alumnus by the USC Black Alumni Association, and last year he won that organization’s highest honor, the Emé Award.

Alumni Merit Awards recognize “individuals whose remarkable achievements speak well for the range and quality of a USC education.” The two winners were:

• Alexandra M. Levine ’71 is chief of hematology in the Keck School of Medicine of USC and medical director of the USC/Norris Cancer Hospital. An expert in hematological cancers, she received the USC Presidential Medallion in 1994 and in 2000 was named a Distinguished Professor.
• Bruce Matthews ’83 is considered to be one of the finest offensive linemen to play the game. He retired in 2002 after 19 seasons in the NFL, with 14 Pro Bowl appearances.

This year’s recipients are:

•Richard Cook, ’72 is chairman of the Walt Disney Studios. He has served on the USC board of trustees since 1998, is a past president of the USC Alumni Association, and is a member of the Board of Councilors of USC College.
• Mara Dru Hunter Redden ’75 was a USC employee for 20 years and is a long-term contributor to the Swim With Mike program. She received the Helen of Troy Award in 1995.
• Mary Richardson ’62 is immediate past president of the USC Alumnae Coordinating Council. During her tenure as president of Las Floristas, she helped raise more than $500,000 for the Keck School of Medicine of USC /Rancho Los Amigos Hospital.