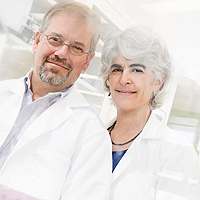 A multi-institution team of investigators led by researchers at the Keck School of Medicine of USC has received $19 million in funding from the National Institutes of Mental Health for a groundbreaking effort to collect genetic information on tens of thousands of patients in order to study the genetic risks for schizophrenia and bipolar disorder.

The USC Center for Genomic Psychiatry and Massachusetts General Hospital together received more than $25 million in grant funding to lead an international network of academic medical centers in creating the Genomic Psychiatry Cohort.

Blood and DNA from 40,000 subjects will be deposited in a repository, along with clinical and phenotypic data.

Professors Michele T. Pato, holder of the Della Martin Chair in Psychiatry, and Carlos N. Pato, chair of the Department of Psychiatry and Behavioral Sciences and the Franz Alexander Professor of Psychiatry at the Keck School of Medicine, will head the national effort to collect data on 10,000 patients with schizophrenia, as well as 10,000 individuals without the disorder.

The cohort will be the largest coordinated effort ever undertaken to understand the underlying genetic risks for these illnesses, according to Carlos Pato, who also directs the Center for Genomic Psychiatry at the Keck School of Medicine.

“Our focus is on both determining genetic risks for serious mental illnesses and in developing a new model of care for these diseases,” he said. “This will be the major national effort in this area for the next five years. We expect a number of important studies to result from this effort.”

USC researchers will conduct large-scale genomic investigations in this population and also have a unique ability to follow patients for long-term studies.

“This aspect of the design is critical to allow a number of follow-up studies and the opportunity to explore disease course and future treatment options,” Carlos Pato explained. “We are building a resource for future studies.”

“Large scale population-based studies are critical for this work,” Michele Pato said. “The ultimate goal is the development of treatments to better intervene in these disorders. If we are able to identify the risks earlier we may, through observation and pre-treatment, be able to limit the impact of these diseases on people’s lives.”

Founded in 2006, the USC Center for Genomic Psychiatry is based at the Zilkha Neurogenetic Institute and the Department of Psychiatry and Behavioral Sciences.

The center is focused on understanding the risks that lead to the development of serious mental illness and is dedicated to creating treatments for these disabling disorders as well as identifying interventions to manage the risks.

Carlos and Michele Pato and the research team from the Center for Genomic Psychiatry benefited from the efforts of USC’s Washington, D.C. Office of Research Advancement, which helped to identify the funding opportunity and worked closely with National Institutes of Health staff to fully understand what the federal agency was looking for in a successful proposal.

The D.C. Office then worked with Keck faculty to assure that the proposal submitted was scientifically competitive. “This is exactly the circumstance where it was envisioned that a D.C. office could have a significant effect,” said Steven Moldin, the executive director.

Thomas Lehner, chief of the genomics research branch of the National Institutes of Health, said, “We’re very excited that we’re able to support cutting-edge research like this. The cohort will collect an unprecedented amount of data and will become a major resource for researchers around the world.”