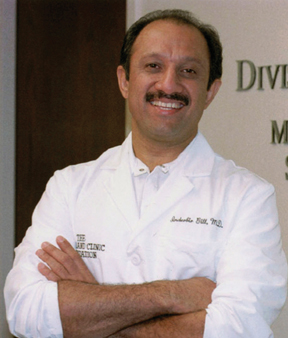 After a national search, Dean Carmen A. Puliafito has appointed Inderbir S. Gill as chair of the Catherine and Joseph Aresty Department of Urology, effective Feb. 1, 2009. He will also be the director of the newly created USC Institute of Urology and will serve as associate dean for clinical innovation at the Keck School of Medicine.

“Dr. Gill is an outstanding addition to our faculty, particularly during this exciting time of expanding our clinical enterprise,” said Puliafito.

Gill comes to USC from Cleveland Clinic, where he is professor and chairman of the Department of Urology, which is ranked number two in urology, according to U.S. News and World Report rankings.

He is also director of the Center of Laparoscopic and Robotic Surgery and professor of surgery at the Cleveland Clinic Lerner School of Medicine at Case Western Reserve University.

As the incoming professor and chair of the Department of Urology, Gill has identified several goals including creating a world-renowned USC Institute of Urology with regional satellites, providing an entire range of sub-specialization; further strengthening the department’s already strong basic, translational and outcomes research programs, with focus on inter-disciplinary collaboration; growing the department’s already excellent residency training program; and creating new teaching programs and targeted symposia to position USC as a leading educational resource in the field of urology.

“USC is a world-class institution with a world-class urology department,” said Gill. “I am most excited about creating the USC Institute of Urology with regional outreach programs.”

Widely acknowledged as the world leader in minimally invasive nephron-preserving surgery�saving the normal part of the kidney and removing only the tumor�for renal cancer, Gill has refined the techniques of laparoscopic and robotic partial nephrectomy and renal cryoablation, which destroys the tumor through the process of freezing. He and his team have now performed these procedures in more than 1,500 patients�more than any other surgical team.

Gill’s team has pioneered a vast series of techniques on laparoscopic and robotic radical prostatectomy, and laparoscopic radical cystectomy. A cystectomy is the removal of the urinary bladder for patients with cancer.

He has a national and international referral base, with 70 percent of his patients coming from out of state for his expertise.

“Dr. Gill is an internationally renowned innovator in the field of minimally invasive urologic surgery,” said Puliafito. “With approximately 3,000 cases to date, he is arguably the most experienced laparoscopic/robotic surgeon in the United States.”

For his outstanding work, Gill has received numerous prestigious awards, including the Dr. B.C. Roy National Award, presented by the President of India for Eminent Medical Person in India. It marked the first time a physician living outside of India was selected for this national award. Gill also was awarded the St. Paul’s Medal by the British Association of Urological Surgeons, which is the highest honor bestowed by the organization.

In addition to his clinical expertise, Gill is also a distinguished researcher. His research interests include developing novel robotic devices and image-guidance systems, augmented reality imaging, and innovative focal ablation therapies for prostate and kidney cancer. Focal ablation destroys only the tumor, preserving the rest of the normal prostate and/or kidney. He and his team are developing and refining natural orifice and single-port laparoscopic surgery in urology, both innovative concepts toward scar-free surgery.

A prolific scholar, Gill has published more than 350 peer-reviewed scientific papers, 50 book chapters and eight textbooks. He is on the editorial board of nine urologic journals. He has been an invited visiting professor to more than 250 institutions and societies worldwide and has performed live surgery demonstrations at more than 55 centers. He was elected to the prestigious American Association of Genito-Urinary Surgeons in 2003.

“The USC Department of Urology has an excellent international reputation,” said Gill. “I look forward to creating a strong and powerful team, one that symbolizes innovation and excellence across all sub-specialties. Together, we will further strengthen USC’s stature, making USC a world leader in the field of urology.”

Gill succeeds Donald Skinner, who has served as chair of the Department of Urology for 28 years.

Keck School names Gill as chair of Department of Urology