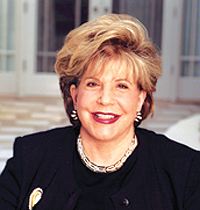 USC TRUSTEE Wallis Annenberg, the daughter of Walter Annenberg, the late publisher, philanthropist and past U.S. ambassador to Britain, represents the second generation of a family that has committed more than $300 million to the advancement of the university.

As vice president of the Annenberg Foundation, she continues to play a central role in the ongoing relationship between the foundation and USC.

In September 2002, she sat beside President Steven B. Sample during the announcement of a $100 million gift from the foundation to the Annenberg School for Communication, the second such $100 million-plus gift made by the organization to USC.

Annenberg, who attended USC for two years, has been a member of the USC board of trustees since 1975.

A patron of the arts, Annenberg serves on numerous boards throughout the Los Angeles area.

PHYSICIAN MARY Ellen Avery, president of the American Association for the Advancement of Science, is an expert in the respiratory problems of newborns.

Avery served as physician-in-chief at the Children’s Hospital in Boston from 1974 to 1985, and is the Thomas Morgan Rotch Distinguished Professor of Pediatrics, emeritus, at Harvard Medical School. She was elected AAAS president in 2001.

Avery helped pioneer the field of newborn medicine in the 1950s, when her research led to a new understanding of neonatal respiratory distress syndrome (RDS), and her expertise has made her a sought-after teacher and speaker throughout the world.

A graduate of Johns Hopkins University School of Medicine, she was one of only four women in the class of 1952. She also has served as a faculty member at Johns Hopkins and McGill universities, and as a visiting professor at universities from Singapore to California.

Her career has included seats as a council member of both the Institute of Medicine and the National Academy of Sciences. She was awarded the National Medal of Science in 1991 by President George Bush for her work on RDS.

CROW INDIAN historian Joseph Medicine Crow was born in 1913, on the Crow Reservation in Southeastern Montana.

He was called to duty during World War II, and while fighting he carried out the four traditional military deeds necessary to attain chieftaincy. He is currently the last living authentic plains war chief.

In 1948 he was elected the Crow Indian tribal historian, and also worked as an appraiser at the U.S. Bureau of Indian Affairs, retiring in 1982.

Crow published his first book, “From the Heart of the Crow Country, The Crow Indian’s Own Stories,” in 1992 at the age of 72.

He currently teaches in the department of Crow studies at Little Big Horn College and continues to lecture, speaking in 1999 at the United Nations.

Crow is a member of the Crow Historical and Cultural Commission and other historical groups.

He last returned to the USC campus more than 20 years ago.