Each spring course required Master of Planning students to address the possibility of turning the area of Hollywood Boulevard between Highland Avenue and Orange Drive into a pedestrian plaza — with Adjunct Instructor Melani Smith’s class performing a site analysis and developing designs for two closure scenarios while Adjunct Instructor Eric Shen’s class developed a multi-modal transportation plan to support the concept.

The touristy area of Hollywood Boulevard, alongside the TCL Chinese, El Capitan and Dolby theaters, has overcrowded sidewalks full of street performers and costumed movie characters. Closing the area off to vehicular traffic is an option that has been discussed but never come to fruition. The block already is closed off 40 days a year for the Oscars and movie premieres.

Smith’s student groups interviewed stakeholders, conducted intercept surveys on the street and authored two reports with a vision for a sustainable transformation of Hollywood Boulevard, including suggested programming and uses for the 789-foot stretch that receives between 60,000 and 95,000 pedestrian visitors a day.

Less than 1 percent of Hollywood is public space, so it’s already very much a park and open-space desert.

“Are we designing for people going through the area or people in the community?” MPL student Jason King asked as his group, “The Backlot,” started the project. “Less than 1 percent of Hollywood is public space, so it’s already very much a park and open-space desert. I was surprised that commercial stakeholders who were wary of the idea became more accepting as we provided facts and data on how pedestrianizing streets has been shown to improve business revenue.”

Another student group developed the “Block of Fame” proposal, which involved a survey of 106 pedestrians on Hollywood Boulevard; 71 percent of respondents said they would like the area to be free from cars.

The Backlot’s design centered on Hollywood’s film legacy with three main components: a craft services area for food, center stage for performances, and a green room for pop-up events and meeting area.

“Something students ended up promoting in both of their schemes was to pilot the idea, which makes a lot of sense,” Smith said. “Rather than just say this space will be forever closed to traffic and permanently changed, you might say let’s try it for a certain amount of time, see what happens and then decide.”

Smith indicated that the Block of Fame proposal featured rich data presentation and analysis with information graphics, while the Backlot plan excelled in creating a fully realized big idea with a cohesive and appropriate theme. 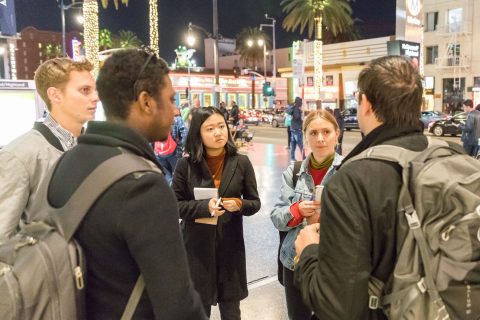 “I love what both projects had to propose,” said Rich Sarian, director of operations for the Hollywood Business Improvement District. “I know a lot of people in the community have been excited about the thought of pedestrianizing Hollywood Boulevard, so it was exciting to see an actual plan put in place. I have saved them as great jumping-off pieces, and I look forward to sitting with a couple of community stakeholders and talking about the plan.”

From classmates to consultants

For Shen’s studio, the students broke up into three groups, with each playing the role of a consulting firm that was hypothetically submitting a proposal to the Los Angeles Department of Transportation, to help bring the Hollywood project past the finish line.

The studios were arranged so that a representative from the L.A. Department of Transportation and other area stakeholders could speak to a combination of the two classes.

Closing down streets to traffic seems like an easy enough task, but there’s much to consider in terms of bus schedules, where traffic will reroute and keeping each of the stakeholder groups happy and involved in the process.

“I think the biggest takeaway for my 14 students was that delivering a project is very complex,” Shen said. “It’s not about just moving some striping and allowing people to start walking on the street. People never thought about how building a simple project can be so complicated, with every element interrelated to other tasks.”

Rather than serving an actual client, the transportation studio was more about learning the method of answering a request for proposals with a project implementation plan. A panel of professionals simulated an interview process at the end of the course.

“Planning schools usually turn out really good transportation planners but people who perhaps are not as well developed as consultants,” student J.P. Kaytrosh said. “That development usually happens on the job. As this studio wrapped up, I was talking with classmates around the lunch table, and we were all saying that it was an incredible experience to learn how to do something so adaptable to our careers.”

The university receives a federal grant to head a regional research effort that addresses challenges with transportation technology.

USC schools on the road to more transportation research

Two USC schools will conduct research on how to improve transportation in major metropolitan areas and how to make the movement of freight more efficient and sustainable.

How do you design a more walkable Hollywood Boulevard?