Students at the Keck School of Medicine of USC do more than learn to be physicians: A group of them got a taste of government policymaking after meeting with state legislators in Sacramento on June 6 and 7.

To give students firsthand experience in working with policymakers, Professor of Clinical Preventive Medicine Michael Cousineau regularly takes students on a trip to the capital as part of his Public Health Policy and Politics class, not just to meet state lawmakers but to seriously discuss health care policy concerns with them.

Cousineau’s most recent trip brought 10 policy students — eight MD/MPH students, one social work student and a PhD candidate — to the Capitol for one-on-one meetings with their individual elected representatives.

“Most of our work has been on access to care — financial needs, insurance coverage, Obamacare,” Cousineau said. “Increasingly, you have people with insurance cards, but they don’t know how to get access or make appointments.”

Most of Cousineau’s work has been in Los Angeles County, including issues involving vulnerable groups such as immigrants and the homeless.

“Beyond issues of access — how to get people coverage financially — and assurance — making sure people actually get the coverage — a lot of these issues are driven by state policy and increasingly by federal policy,” Cousineau said, adding that federal changes to the Affordable Care Act have caused state policymakers to scramble to find ways to continue coverage for Californians. 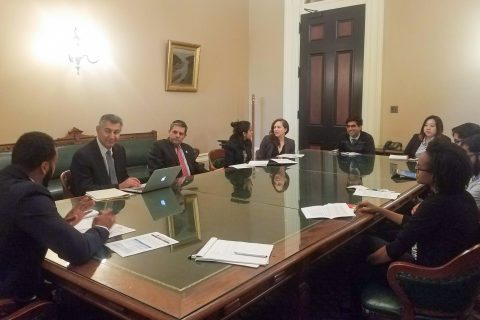 Before the trip, students are assigned to first make an appointment with their own regional representatives — ideally, one Democrat and one Republican. Cousineau said that, contrary to what one might expect, it’s more effective for USC students to not identify themselves as such.

“You say, ‘I’m a constituent,’ and remember that they work for us,” he said.

Cousineau estimates that about two-thirds of his students succeed in getting one-on-one face time scheduled in Sacramento. For the rest, Cousineau intercedes with assistance from the USC staff in state government affairs at the Capitol. He also schedules a group meeting with a senior legislator involved in health care policy.

Ahead of their meetings, Cousineau counsels students with the acronym PPO: prepared, professional and on time.

With support from the Keck School of Medicine, this summer’s participants flew to Sacramento for two days and met as a group with Democratic Assemblyman Jim Wood, co-chair of the special committee formed in the wake of last year’s failure in the Legislature to enact a single-payer health plan. Cousineau said students focused on the state’s response to the lack of federal support for the Affordable Care Act, specifically: If we’re not going to do a single-payer plan, under which the state would handle all health care funding and payments centrally, what are we going to do?

Wood took the students seriously enough to extend his planned 20-minute meeting to an hour and ask them to send their final course project, Cousineau said. Other legislators found themselves drawn into earnest discussions with students about health care policy.

“They take us seriously,” Cousineau said, “because these aren’t just students. They’re medical professionals who have clinical training and research skills with real patients and projects. It’s good to have all the data, but the personal anecdotes are often what gets policy makers’ attention.”

In return, Cousineau said he hopes that personally meeting legislators with practicing medical backgrounds — Wood is a dentist — will inspire some of the students to run for office themselves.

“We met with [state Sen.] Richard Pan,” he said. “Here’s this guy who was a practicing pediatrician for 15 years and decided to run for office. One of the students came away saying, ‘I could do this. I could run for office.’ I can’t teach that.”

The non-profit JWCH Institute honored Michael Cousineau, associate professor of Family Medicine and Preventive Medicine at the Keck School, with its Innovation Award at the annual Hand & Heart Gala on Nov. 7.

Meeting focuses on health form progress and the possible repeal or replacement of the Affordable Care Act.

President Nikias, trustees and senior administrators meet with legislators to discuss key issues facing the university and its students.

Alumna excels as TV journalist by staying true to herself, and her ‘loud personality’

Frances Wang’s ability to connect with people leads to success at a Sacramento station.