A new generation of outdoor lights spreading across landscapes require greater scrutiny to reduce harm to wildlife, says a USC-led research group that developed a new tool to help fix the problem.

The team of biologists surveyed select species around the world to determine how the hues of modern light-emitting diode (LED) lamps affect wildlife. They found that blues and whites are worst, while yellow, amber and green are more benign. Some creatures, including sea turtles and insects, are especially vulnerable.

The findings, which include the first publicly available database to help developers, designers and policymakers choose wildlife-friendly lighting colors, appear today in the Journal of Experimental Zoology Part A: Ecological and Integrative Physiology.

“Outdoor environments are changing rapidly and in ways that can impact wildlife species,” said Travis Longcore, lead author of the study and assistant professor of architecture, spatial sciences and biological sciences with the Spatial Sciences Institute at the USC Dornsife College of Letters, Arts and Sciences. “We provide a method to assess the probable consequences of new light sources to keep up with the changing technology.” 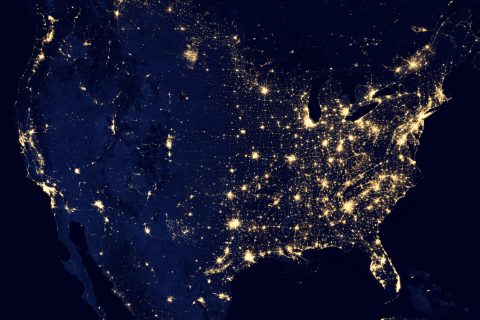 A composite of satellite images shows nighttime illumination from the use of electric lights in the United States in 2012. (Image/NASA)

LEDs of many colors: What’s the effect of their light on animals?

LED lights are expected to make up 69 percent of the global market by 2020, compared to just 9 percent in 2011. They are popular because they have many uses, conserve energy and last longer than other lamps.

To understand the impacts and find compromise solutions between human and animal needs, the researchers focused on insects, sea turtles, salmon and Newell’s shearwater, a seabird, for which existing data were readily available. They found that the worst nighttime lights are intense blue and white colors — some affect species as much as an equal brightness of midday sun — and three times more than yellow or green lights designed with wavelengths less disruptive to wildlife.

Effect of light on animals: important for conservation

The research is important for wildlife conservation. For example, loggerhead sea turtle hatchlings, an endangered species, leave beach nests at night and follow artificial light inland to danger instead of skittering to the ocean. Similarly, lights attract migrating juvenile salmon, exposing them to predators. Also, global declines in insects have been linked in part to light pollution, Longcore said. The new research will help people choose lighting to reduce wildlife impacts.

The researchers focused on only four groups of creatures, which have been studied for light responses previously. Future studies will incorporate more species worldwide.

A central component of the USC research includes the first publicly available database showing how about two dozen different types of artificial lighting affect wildlife. The matrix is called “Rapid Assessment of Lamp Spectrum to Quantify Ecological Effects of Light at Night.” Developers, land-use planners and policymakers can use it to choose lighting that balances the needs of nature and people. Today, regulations to limit light direction or intensity typically don’t account for the different hues of LED lights, Longcore said.

“If we don’t provide advice and information to decisionmakers, they will go with the cheapest lighting or lighting that serves only one interest and does not balance other interests,” Longcore said. “We provide a method to assess the probable consequences of new light sources to keep up with the changing technology and wildlife concerns.”

The study authors include Longcore; Airam Rodríguez of the Estación Biológica de Doñana CSIC in Spain; Blair Witherington of The Walt Disney Co.’s Animals, Science and Environment program; Jay Penniman of the University of Hawaii at Manoa, Pacific Cooperative Studies Unit; and Lorna and Michael Herf of f.lux Software LLC.

C&W Energy Solutions LLC provided seed funding for the investigation, but did not participate in research or reporting results. Rodríguez was supported by a Marie Curie International Outgoing Fellowship (330655 FP7-PEOPLE-2012-IOF) and a Juan de la Cierva contract from the Spanish Ministry of Economy, Industry and Competitiveness (IJCI-2015-23913).

Sane in the city: 5 tips to manage the pressures of life in the urban jungle

Big cities like Los Angeles can overstimulate the senses. USC experts suggest some ways to protect your mental health.

Hardly a drop is wasted as elaborate system gathers runoff, removing debris and contaminants in the process.

Bright idea could save lives in developing countries