Leila Hoffpauir, a sophomore in the Division of Cinema and Media Studies at the USC School of Cinematic Arts, will spend three weeks in the United Kingdom this summer as part of the Fulbright Summer Institute for film and media.

She and other participants will develop intercultural understanding as part of one of the entertainment industry’s most prestigious and selective summer scholarship programs.

This year marks the 70th anniversary of the U.S.-U.K. Fulbright Commission, which was created through a treaty conceived by Sen. J. William Fulbright in the aftermath of World War II. Each year, the commission supports up to 60 U.S. undergrads to undertake demanding academic and cultural summer programs at leading institutions in the U.K., with this year’s participants going to the University of Birmingham.

For Hoffpauir, being among the 5 percent of applicants selected for the fully funded opportunity is even more special because it will be her first trip abroad.

“I had never been out of the country and knew I wanted to go. Even though Fulbright was a long shot, I thought it would be a cool way of making it happen. Initially, I didn’t think I would get chosen, even when I started getting emails about being moved up the rounds for interviews,” Hoffpauir said.

In her Fulbright interviews, she talked about studying the adaptation of U.K. comedic television shows for the U.S. market, hoping to understand why shows like The Office were so successful while others were not.

“I am thrilled to be able to experience U.K. culture for the first time. I hope this program will provide insight into how the media cultures of the U.K. and the U.S. interact and give a greater sense of how media across all cultures is interconnected,” Hoffpauir said after receiving her placement.

From Alabama to L.A.

Hoffpauir grew up in rural Alabama, always knowing that she wanted to study and broaden her horizons in cosmopolitan places. She had a passion for theater and expressive art since her first performance in a play at the age of 5, but she was unaware that creative pursuits could be a viable career path. 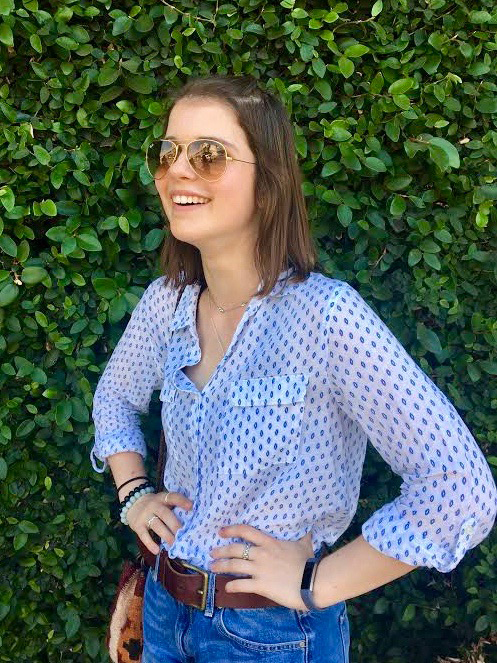 Hoffpauir grew up in Alabama, went to high school in New Orleans and came to USC to study film. (Photo/Courtesy of Leila Hoffpauir)

When Hoffpauir moved to New Orleans for the latter half of high school, her eyes were opened to an array of possibilities for the future.

“I realized that art and career could combine into one,” she said. “The more I was involved in media and theater in my high school, the more I knew this is what I wanted to do with my life.”

With that realization, she began touring college campuses, and when she visited USC for the first time, she promptly took to the Trojan spirit.

“I looked around and knew it made no sense to go anywhere else. There was no better option for what I wanted to do, so I bought a USC shirt at the bookstore and it was a done deal.”

At USC, Hoffpauir works as a showrunner for the Breakdown, a local news parody broadcast on Trojan Vision.

“It is in the style of “Weekend Update”on SNL,” said Hoffpauir, who writes anywhere from 50 to 60 topical jokes a week for a 30-page script.

Working with her peers and gaining valuable experience “is making me a better writer and producer,” she said. “I have made amazing friends and learned a lot.”

Hoffpauir also works as an editor and production assistant with the USC Price School of Public Policy’s video services department. Before embarking on her trip to Birmingham in July, she is spending the first half of the summer interning for the on-air planning division at Fox Broadcasting. “I am doing things I didn’t even know I was interested in until I was exposed to them,” she said about the internship experience.

Looking ahead to London

Hoffpauir hopes to pursue a career in which TV production and comedic writing converge. She has merged her many interests at the USC School of Cinematic Arts, constantly discovering new opportunities along the way.

“I love the Cinema and Media Studies division,” she said. “I am able to do anything I want and change my mind a lot. I have never felt stuck or been put in a box.

“I have met people I never thought I would meet and have a network that is so far beyond the people I go to school with.”

As Hoffpauir prepares for her journey across the pond, her itinerary grows with every passing day.

I want to go to the BBC headquarters, to London, to the theater and to see all the William Shakespeare relics.

“I want to go to the BBC headquarters, to London, to the theater and to see all the William Shakespeare relics,” she said, ticking off just a few of her desired destinations.

Hoffpauir also hopes to get the courage to go on stage during an open mic at a comedy club, trying out her brand of American humor on a British audience.

But what she is most looking forward to is meeting people from around the world who share her interests.

“Being able to speak with different people about how they create films and what their perspectives are,” she said. “There are going to be people from all over in this program, and I can’t wait to hear the stories of what got them to this point.”

Screenwriters urged to deliver on the promise of a great story

As audiences expect more from movies and TV, Irving Belateche exhorts students to turn their personal visions into compelling tales.

Search follows a father seeking his missing daughter from a unique point of view — computer screens and smartphones.

In a competitive year, tie votes lead to additional nominees for the awards, which honor the authors of printed works alongside the writers who adapt their stories for film and TV.