All games will be nationally televised by either the ESPN channels, ABC, Fox, Fox Sports 1 or the Pac-12 Network.

Kickoff times and TV plans have been set for the first four games of defending Pac-12 champion USC’s 2018 football schedule.

USC will begin its 2018 slate on Sept. 1 at the Los Angeles Memorial Coliseum, where it has won its last 16 contests, with a 1 p.m. encounter on the Pac-12 Network against UNLV of the Mountain West Conference. 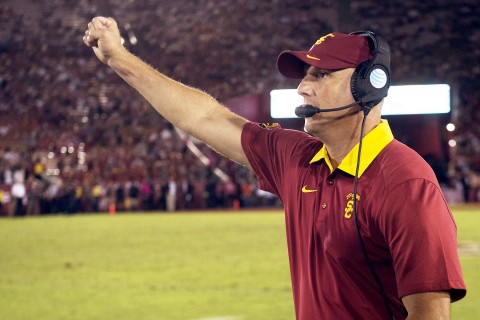 Friday under the lights

USC then returns to the Coliseum for a Friday night game against Washington State on Sept. 21 at 7:30 p.m. on ESPN, the Trojans’ first Friday home game since 1999.

Start times and televising networks for USC’s remaining eight games of 2018 will be made six to 12 days before each contest.

The Pac-12 has television agreements with ESPN (including ESPN2, ESPNU and ABC), Fox (including FS1) and the Pac-12 Network that will allow every conference football game to be shown live nationally in 2018.

Champions from the south

USC, which went 11-3 last season — its most wins since 2008 — and became the first South Division team to win the Pac-12 Championship Game, is led by Clay Helton, who has posted more victories (21) in his first two full seasons than any other Trojan head coach. Troy returns 13 starters (seven on offense) and both specialists in 2018 from an offense that put up its highest total yardage average (484.1) since 2005 and a defense that led the nation in sacks (43) last fall.

On offense, USC welcomes back a pair of starting wide receivers in Tyler Vaughns, who had 57 receptions for 809 yards with five touchdowns in his 2017 debut campaign, and Michael Pittman Jr., who added 23 catches in 2017 and earned All-Pac-12 first-team honors as a special teams performer, as well as veteran tight end Tyler Petite, who has 48 career catches (23 last year). Four of USC’s starting offensive linemen return in 2018: versatile Toa Lobendahn, a tackle last year who likely will be used at center this season, guards Chris Brown and Andrew Vorhees and tackle Chuma Edoga. Tailback Stephen Carr (363 rushing yards and 17 catches in 2017) also is back.

USC’s defense returns both inside linebackers in Cameron Smith, a 2017 All-Pac-12 first teamer when he led Troy with 112 tackles (he has 273 career stops), and John Houston Jr. (84 tackles in 2017), and a pair of secondary players in safety Marvell Tell III, another 2017 All-Pac-12 first-team honoree who had 84 tackles last fall, and cornerback Iman Marshall (six career interceptions). Also back are several key part-time starters in high-energy outside linebacker Porter Gustin (14 career sacks), Jordan Iosefa, who saw work at both inside and outside linebacker, nickel back Ajene Harris (five career picks) and defensive lineman Christian Rector (11 tackles for losses, with 7.5 sacks, in 2017).

There’s a palpable sense of excitement in the Coliseum — and the largest crowd ever at a USC spring game — as the new-look Trojans make their debut.