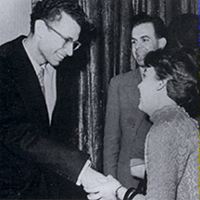 Pollack with admirers backstage following a Moscow performance in 1961.

When in the winter of 1958 a young American took the Chopin Express to Moscow and stepped, shivering, onto the platform, he had no idea he was about to embark on a decades-long love affair ? or make Cold-War history.

Pianist Daniel Pollack, then 23, traveled behind the Iron Curtain to test his mettle in the first International Tchaikovsky Piano Competition.

Fellow American Van Cliburn won the top honor. But Pollack, also a prizewinner, struck a chord with the Russian public that reverberates to this day.

It was just months after the United States was bested in the space race by the Soviet launch of Sputnik. And it was cause for considerable stir, according to Pollack, a professor of keyboard studies at the USC Thornton School of Music, as not one, but two Yanks reached the contest’s finals on Russki turf.

Pollack, meanwhile, was invited to stay in the U.S.S.R. to perform and record, becoming the first American to cut tracks on the state-run Melodya label.

The albums sold in the millions in the former Soviet Union, and selections recently have been re-mastered and reissued on “Daniel Pollack, Pianist: 1958 and 1961, The Legendary Moscow Recordings” (Cambria).

Pollack went back to tour the former Soviet Union 13 other times after 1958, more than any prizewinner in any of the subsequent competitions, including Cliburn.

“The Tchaikovsky competition was most certainly the trigger to my career. No question about it,” Pollack writes in the CD’s liner notes. “What is curious is that it did not take a first prize to do that. This could never happen again.”

The political climate of the times contributed to his success, Pollack said. Being American gave him a cachet in the U.S.S.R. And being appreciated by the Russians, who were renowned for musical excellence, gave him an “international seal of approval.”

But he believes it’s a “more sentimental link” ? his identification with “a Russian soul that comes from the landscape, the hardship” ? that mattered most.

“I’m a musical grandchild to Russians,” said Pollack, who was trained at Julliard by the expatriate Rosina Lhevinne, a graduate of the Moscow Conservatory.

“For Russians, as for me, it is necessary to be moved by a performance emotionally. If the music doesn’t speak to me, I’m not going to perform it,” he said.

Pollack credits his playing style ? which he described as “large-scale and passionate” ? with connecting him to a Russian audience.

“I know they’re feeling what I’m trying to express,” Pollack said. “I just know it, I sense it.”

Whatever the cause, Russians clearly connected with him.

Over the years, Pollack said, they have rewarded him with many return invitations and calls for encores longer than the original program.

Memories of his performances are surprisingly long too. He said he can still hardly walk into a store run by immigrants in Los Angeles or New York without someone stopping to exclaim, “You are Pollack, no?!”

Pollack, who has taught at USC since 1971, is often sought out by the children and grandchildren of his first listeners.

“Two-thirds of my students are foreign-born,” he said. “I hardly have a ‘Smith’ or ‘Jones’ in my class.”

Always on the lookout for an opportunity to make a difference in someone’s career, Pollack regularly serves on the juries of international piano competitions such as the Tchaikovsky.

And he still travels widely to perform, most recently in absentia: In May and June, piano pieces by Pollack were circling the globe as musical selections aboard Air Force One, Air Force Two and all 576 planes of the United Airlines fleet.

Pollack will return to Russia in person to perform next spring.