In his youth, Conor Cimo was telling people he wanted to be an aerospace engineer. But he ended up aiming a little higher than the Earth’s atmosphere, instead choosing to join the space industry. He just received his bachelor’s degree in astronautical engineering from the USC Viterbi School of Engineering.

“It’s a new industry. There are all these rapid changes going on and there’s the ability to get involved with things that you really wouldn’t be able to do in aircraft design,” Cimo said. “I also saw a really cool avenue for changing our environment and ecological status here with space technologies.”

Fascination with flight: Having a blast (off) with friends

As a freshman, Cimo quickly became immersed in all things space, joining the USC Rocket Propulsion Lab just a month after he started his first semester in the spring of 2015, and the Collaborative High Altitude Flow Facility as a research assistant the following semester.

At RPL, he found a connection to other students who were just as passionate about rocket engines.

Cimo, left, at a launch with the Rocket Propulsion Lab in 2016. (Photo/Nadia M. Whitehead)

“It’s one of those places where you get out what you put in — I put in a lot,” Cimo said. “There’s bonding that happens when you’re there until 4 in the morning making parts. There’s a camaraderie formed between a lot of good engineers.”

One of his fondest memories is pushing the launch button for the Déjà Vu II rocket on his 20th birthday. It was the first rocket he saw succeed, reaching an altitude of just over 25,000 feet.

At the altitude flow facility, under the direction of lecturer Matthew Gilpin, he was able to perform space propulsion research in a more professional setting.

“Conor’s passion and enthusiasm for engineering, and spacecraft propulsion in particular, is contagious within the lab,” Gilpin said. “Conor’s example shows younger students that if you are doing something you love, then you are truly having fun.”

But in his sophomore year, when he was surrounded by engineers, it started to feel like he was in an echo chamber.

“I kind of realized I was living in this bubble — I was living with engineers, my best friends were all engineers, we’d go to parties and talk about thermodynamics,” Cimo said. “It was awesome, but not the life I wanted to lead.”

While he was growing up, Cimo’s family strived to maintain a household with low waste and low energy use. The family had a large garden space, composted everything and was conscientious of any increase in the electric bill.

Cimo brought his passion for environmentalism to USC. Each year, he considered joining USC’s environmental activism organization, Environmental Core, but felt overwhelmed with engineering classes and rocket research. He eventually made the time. 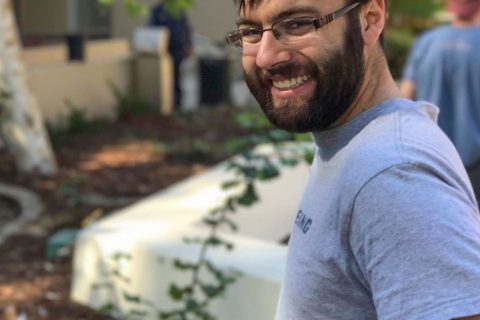 Cimo helped with the expansion of the native plant garden in Queens Courtyard. (Photo/Courtesy of Conor Cimo)

“You get to the point where you can’t just say you’re going to be vegetarian and that’s your input. You have to be more active,” Cimo said. “And Environmental Core provides a really cool channel for that. It’s a bunch of really dedicated people who are doing good stuff.”

Within the group, he became the lead of the native plants project, which aims to convert the greenery on campus to Los Angeles natives, such as California fuchsia, Santa Ana Cardinal and western redbud. Since they have evolved in L.A.’s Mediterranean climate, native plants adhere to the water cycle and don’t need to be watered. In addition, the local animals that co-evolved with them flourish.

With funding from the Green Engagement Fund and support from the Theodore Payne Foundation and USC Facilities Management Services, the environmentalists have transformed about 7,000 square feet of space around Bing Theatre and the John Williams Scoring Stage.

Cimo believes that advances in sustainability can be adapted from technologies developed for space exploration, such as the solar panels used on spacecraft, recycled water systems or even agriculture methods.

“The problem is less about developing the technology and more about forming the connection between astronautics and environmentalism,” he said. “The space station is a good example. It’s a nearly self-sustaining laboratory that recycles about 70 percent of all their urine. With water shortages across the world and high-water usage in agriculture, we need to figure out ways to do that.”

After graduation, Cimo will return to SpaceX where he did an internship last spring, continuing design work for the Raptor Engine’s combustion devices team in a three-month associated engineership. But after that, who knows?

For now, he’s unsure if he will stay at SpaceX after his three months are up, get a degree in botany, do research in space agriculture or simply fix up his Ford Ranger and live in it along the California coast.

“A window into the existential crisis of a graduating senior,” he joked.