Kids dream of jobs in monochromelike simplicity: “When I grow up, I want to be a doctor or firefighter or pop star!”

Maturity reveals career pathways in full color — a process that USC promotes for underrepresented students under a program to advance science careers. Beyond becoming an astronaut or lawyer or basketball player, USC steers students to work in, say, nanorobotics or microfluidics or geobiology.

Finkel leads the Geobiology and Genomics Undergraduate Research Experiences program. About 30 students are enrolled this year. In the past 14 years, more than 160 students have participated.

This is more than a what-color-is-your-parachute job quest for students. The program aspires to change the complexion of higher education while transforming cultural perceptions of college studies.

The program accepts undergraduate students, with emphasis on underrepresented and first-generation students, a strategic calculation so tomorrow’s scientists become more diverse than today’s. Broadening access to research in higher education helps change the student body, create access to high-quality research opportunities and build a pipeline of professionals who can one day step into faculty leadership roles.

This is a pathway to a career that they might not have expected.

“This program helps undergraduate students learn that they can have challenging, stimulating experiences in research labs,” said USC Provost Michael Quick. “This is a pathway to a career that they might not have expected.”

What’s needed are pathways students can follow toward careers in science, engineering and technology. Said Finkel: “To increase diversity in the ranks of science, we’ve got to get students when they’re young. We want them to discover there are other potential career pathways in research in addition to more traditionally understood health professions.”

Increasing access and opportunities are top priorities for USC. Recently released student and faculty diversity numbers provide a gauge for measuring the university’s results. USC earns high marks for enrolling more minority students than any other private institution in the Association of American Universities. USC also leads the nation’s universities in enrolling the most underrepresented minority graduate students.

The program offers inducements of curiosity and cash. First, students have liberty to seek out many labs to work in. It takes initiative and imagination for a 20-year-old with little or no formal laboratory experience to prove how they will contribute to a research team.

Second, the program pays students for the hours they spend doing research in labs. On average, Finkel said they make about $17 per hour and work about 13 hours per week or more during summertime — among the highest paid undergrads working at USC.

Justin Gaither joined the program. He attended Grover Cleveland Charter High School in Reseda and Glendale Community College before transferring to USC. He’s passionate about sports, especially basketball. He had heard of biomechanics before USC, but didn’t know much about it. 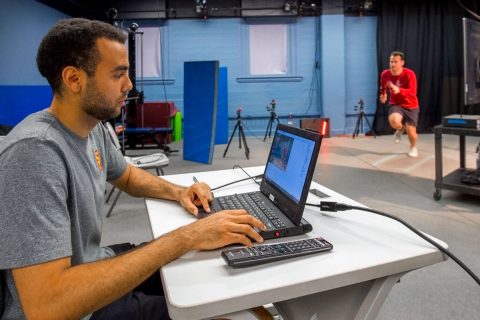 Justin Gaither at work in the genomics and geobiology lab. (USC Photo/Gus Ruelas)

“I wanted to get into sports, sports engineering or exercise science, maybe working with athletes or sportswear companies,” Gaither said. “I thought jobs like this were niche, just one or two, but this program opened a whole new world of opportunity for me.”

After a stint in community college, Gaither transferred to USC, connected with a mentor in the Black Alumni Association, who linked him to the program. Soon, he began working in the Biomechanics Research Laboratory run by Jill McNitt-Gray, professor of biological sciences and biomedical engineering at the USC Dornsife College of Letters, Arts and Sciences and the USC Viterbi School of Engineering.

A lab for athletes and artists

Tucked within the physical education building, the lab is a fusion of sweat, high-tech gear and rehabilitation. It is mix of nutrition, physiology, strength and conditioning, data analytics, sports medicine and psychology. People who come here include wounded military veterans. Dancers explore ways to channel energy to motion for peak performance. Basketball players work on perfecting their free throws. This is where Gaither works. 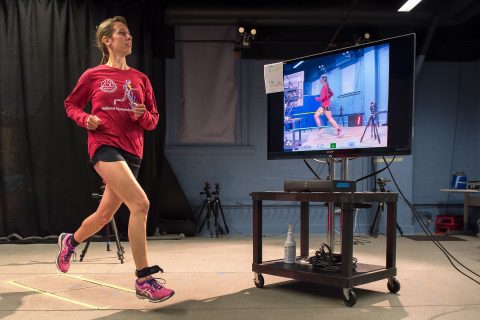 Data from Marisa Papp’s movements are collected in the lab. (USC Photo/Gus Ruelas)

Gaither spends three days a week in the lab, working up to six hours per session. Among those who frequent the lab are Olympic athletes, NCAA athletes and performing artists. He works hands-on with patients and does research under the supervision of McNitt-Gray. He affixes sensors on their bodies to record motion, linking to a computer model and replicating motions over and over to observe how the body responds. He’s helped USC athletes gain peak performance and people in wheelchairs build locomotion.

“This is how they get started,” McNitt-Gray said. “We get them involved, progress it and get skills they need to get out and get jobs.”

Gaither said the program has helped him think about his future in new ways.

“I’ve seen this on ESPN and now I get to do it and it’s so cool,” Gaither said. “It opened my eyes with what I can do in engineering, and I can see how it is applied to different kinds of careers.”

The program is important to show families the value of higher education, too. Many of the minority undergraduates at USC are first-generation students, which comprised about 17 percent of the class of 2021, according to the USC Office of Admission. About two-thirds of last year’s incoming freshman class are students of color. Sometimes, families question the value of time spent in a research lab versus volunteering or working in a medical clinic, Finkel said. So, by paying students to work in labs, it demonstrates research has value as a career option.

Xavier Garcia will receive his degree in health and human sciences this month. It has been a long journey. USC’s research program helped him on the way. 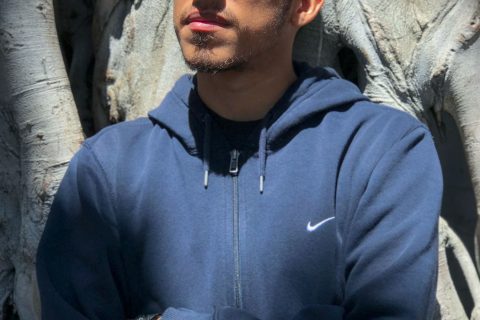 Xavier Garcia will receive his degree in health and human sciences this month. (USC Photo/Gary Polakovic)

He is the first person in his family to go to college. That achievement exceeds his mother’s expectations. She was satisfied he graduated high school. That’s where his journey began.

Garcia grew up in Sacramento and wanted to be a doctor, but he was a poor high school student, not for lack of smarts, but lack of initiative. He often skipped school and homework and mixed with the wrong crowd. He assured his mother, a single mother of four, that everything was OK, and she believed him. It wasn’t. He barely graduated with a D-average.

Next, he went to community college, where he had all but given up on his dream of being a doctor.

“My goal was impossible. How could I compete and go to Harvard or a big medical school when I’m in community college and undervalued?” he said.

His mom told him about a friend, a successful doctor who also once attended community college. That story motivated him.

“I thought, ‘if he can do it, then I can do it, too!’” Except the story was a fiction his mom created to motivate her son. It worked. Xavier worked three jobs to pay the bills and support his mother while sending himself to college.

My goal was impossible. How could I compete and go to Harvard or a big medical school when I’m in community college and undervalued?

He pulled grades good enough to transfer to USC. When he got here, he realized he lagged in research experience. He needed to spend more time in laboratories while working to pay for school and support the family. He needed a solution. Enter the Geobiology and Genomics Undergraduate Research Experiences program.

Garcia heard about the program from other USC students, he applied and was accepted. He joined the Anat Erdreich-Epstein lab at Children’s Hospital Los Angeles, an affiliate of the Keck School of Medicine of USC. Soon, he was using confocal microscopy to visualize the results of tagging a gene that suppresses brain tumors. And he got paid to do it, since the program paid students for time spent in research lab. So he gained valuable experience, maintained focus on studies and helped pay the bills.

“If it wasn’t for this program, I wouldn’t have been able to do research. I’m still amazed that I get to do things I love. I get paid and I get to help my family at the same time,” he said. 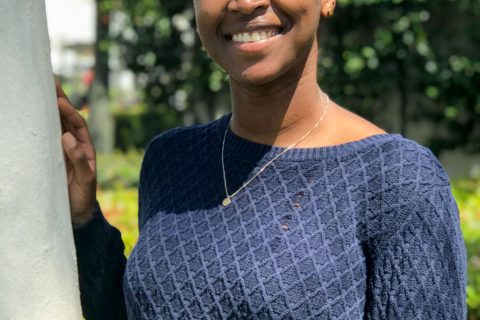 Jada Hislop is a first-generation college student who already has research experience as an undergraduate. (USC Photo/Gary Polakovic)

Jada Hislop came to USC from Georgia, the first person in her family to attend college. She began in a work-study program in molecular and computational biology at USC and joined the undergraduate program soon after. She works in a lab that studies brain responses to sweeteners, including neuroimaging at the Brain and Creativity Institute. She said the program is important because it shows that research experience benefits students immediately, not just after graduation.

“Having those paid research hours each week is very meaningful. If I’m being funded, it means I can be that much more focused on my projects than if I had to work an outside job,” Hislop said.

Still, her family doesn’t fully grasp the university experience. For example, she said her father, who didn’t go to college, struggles to understand what she does at USC.

“My dad has no idea what I do, and I’ve explained it a hundred times,” Hislop said. “He supports me, but it’s hard for him to understand, like it isn’t real. One time, I went to the National Institutes of Health for research, and when they sent him the form in the mail, he said, ‘I thought you were volunteering at the hospital.’ I explained I was working in a lab at the NIH, that I wasn’t at some hospital working in the gift shop.”

Today, USC’s undergraduate program is undergoing change. It was originally funded by an NIH-funded Center for Excellence in Genomic Science program aimed at students from underrepresented backgrounds, Finkel explained. Today it is funded jointly by the Center for Dark Energy Biosphere Investigations (C-DEBI), a National Science Foundation-funded program with focus on the deep ocean, along with the USC Office of the Provost.

That number is significantly higher than the national average at the school, where female engineers find balance and camaraderie.

Drilling, filling and X-rays: Undergrads learn what it’s like to be a first-year dental student

USC’s Dental Explorers program introduces minority students to dentistry and its specialties, including orthodontics and pediatrics.

Work in the USC Loker Hydrocarbon Research Institute may solve one of the world’s biggest challenges — the clean generation and storage of renewable energy.

Undergrads look for an academic edge

A newly launched program offers insights on career development through a series of informative workshops.