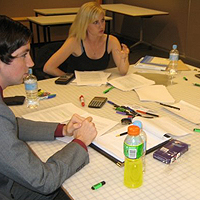 James Bohan and Ashley Mahaffey prepare for the case competition.

Four seniors from the USC Marshall School of Business earned first place in the Pacific Rim Real Estate Society Property Case Competition at the University of Technology in Sydney, Australia on Jan. 21.

The society is a prestigious international organization dedicated to providing a formal focus for property researchers, educators and practitioners in the Pacific Rim region. The competition, the society’s first, was designed to encourage a greater understanding of the property industry among students and conference delegates from the wider Pacific region.

USC Marshall’s undergraduate real estate program, ranked seventh in the nation by U.S. News & World Report, was the only invitee from the United States after hosting its own International Real Estate Case Competition last April on the USC campus.

“Marshall has earned its reputation as the preeminent undergraduate program in real estate on the West Coast, and we were asked to come because of our standing,” said Robert Bridges, a professor in the real estate program and the team’s coach and faculty adviser. “We prepared them, sent them halfway around the world by themselves and we consider their accomplishment to be remarkable and significant.”

USC Marshall’s participation in an international event such as the Pacific Rim case competition is consistent with goals established by the school’s dean, James Ellis. He has placed a particular emphasis on affirming and strengthening the school’s leadership role in Asia and the Pacific Rim, with the goal of establishing USC Marshall as an international repository of academic, technical and business knowledge in support of the next generation of cross-cultural and multinational business endeavors.

USC Marshall, having faced the University of Auckland in Los Angeles the previous April, knew that their adversaries would be formidable and that they might be at a disadvantage due to the unfamiliar business customs of a foreign setting. They focused their preparation on the topics of international trade, finance, currencies, insurance and legal issues, as well as local customs and ethics.

Each team was asked to analyze a case involving an historic bank building that was being converted into apartments in Mexico City. The USC students took a different approach to the case than other teams, deciding to act as consultants to the person who was going to acquire financing and carry out the conversion of the building. “The other teams looked at the financial side of things and advised to abandon the project,” Mahaffey said.

The USC team focused on the practical considerations of such an adaptive reuse project, including the time and money needed to convert the building as well as the amenities it should provide for the rents the building owner wanted to charge. They also paid attention to the cultural implications of building in Mexico, as well as creating housing in an area that was gentrifying. “We knew it was important to bring these projects to the city center, and I do think our background of living in L.A. helped us,” Mahaffey said.

The students, competing in the championship round against a team of handpicked case competition specialists from the University of Sydney, were given four hours to prepare their case. They were limited to the use of transparencies, pens, white boards and calculators for the presentation. Presentations lasted 10 minutes and the students gave their final-round presentation before an audience of more than 75 judges, conferees, students and faculty.

“Our team was confident that our education and preparation as far as case competitions go would make us competitive,” Mahaffey said. “Our Marshall real estate program emphasizes the case study method in class and this brings a mix of academic skills, practical knowledge and presentations. From what saw of the other teams, they didn’t have that experience and it gave us a real advantage.”