Pioneering research on the diagnosis, treatment and prevention of advanced lung disease is being strengthened at the Keck School of Medicine of USC thanks to generous support from the Hastings Foundation.

A new gift of $12.5 million renews the foundation’s commitment to the USC Hastings Center for Pulmonary Research, which it established in 2014 with a $7.5 million donation. Researchers at the center seek breakthroughs in the laboratory that can be translated into new and promising approaches for lung injury, repair and regeneration. 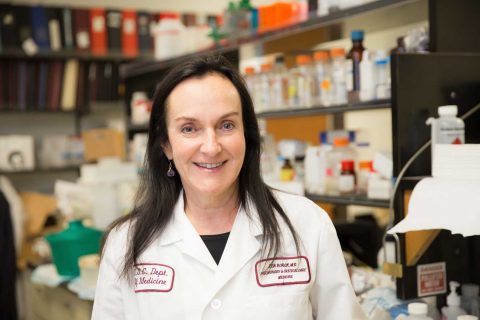 “This generous support will enhance our research on serious pulmonary diseases that affect millions of people around the world and facilitate our development as a premier center for lung research,” said Zea Borok, director of the center and professor of medicine and biochemistry and molecular medicine. “Our investigators are seeking new strategies to treat and cure conditions like chronic obstructive pulmonary disease, cystic fibrosis and idiopathic pulmonary fibrosis. We are incredibly grateful to the Hastings Foundation for recognizing the critical importance of this work.”

The foundation’s ongoing support has ensured the center can continue to recruit leading scientists and promising young researchers, said Borok, who serves as chief of the Division of Pulmonary, Critical Care and Sleep Medicine at the Keck School of Medicine.

A multidisciplinary research hub, the center features specialists in basic lung biology, epigenetics, respiratory health, regenerative medicine and stem cell research. Collaborators include scientists from the USC Center for Advanced Lung Disease and experts from the Eli and Edythe Broad Center for Regenerative Medicine and Stem Cell Research at USC.

We have been extremely impressed with the advancements in pulmonary research that have emerged from the center in the past few years.

“We have been extremely impressed with the advancements in pulmonary research that have emerged from the center in the past few years,” said Gene Gregg, president of the Hastings Foundation’s board of directors. “This new gift is a symbol of our continued investment in USC’s skilled researchers and clinical scientists as they lead the way in the fight against lung disease.”

In addition to supporting new faculty members and researchers, the foundation’s funding has enabled the center to offer postdoctoral fellowships to up-and-coming scholars and acquire shared equipment that is housed in dedicated research space for its scientists in the Hoffman Medical Research Center.

As part of its vision to enhance the scientific environment for lung disease research at USC, the center recently hosted its second successful symposium on the university’s Health Sciences Campus. The symposium included presentations from leaders in the field from around the country and was attended by more than 120 USC scientists.

The center conducts a biweekly seminar series featuring leading experts in basic and translational lung research from around the country. Monthly meetings at the center bring together pulmonary disease researchers across USC to foster collaborations and encourage joint grant applications.

Long-term goals include receiving national recognition as a center of excellence for lung research that advances clinical care. As part of this undertaking, the center plans to establish a tissue bank that will provide investigators with access to lung cells and tissues to facilitate innovative studies.

“The Hastings Foundation has been an outstanding and invaluable partner in our efforts to treat and cure chronic illnesses of the lung,” said Laura Mosqueda, dean of the Keck School of Medicine and professor of family medicine and geriatrics. “We are deeply thankful for its support of our USC Hastings Center for Pulmonary Research. It has truly energized our scientists and created a collaborative hub for innovation in basic, clinical and translation research on this critical issue.”

For more than half a century, the foundation has supported research and clinical breakthroughs at the Keck School of Medicine. Its first gift to the medical school came in the early 1960s, supporting the recruitment of experts in pulmonary disease. Since 1975, the foundation has donated more than $45 million to the university.

In recognition of that legacy, university officials will present the foundation with the Elaine Stevely Hoffman Award at the Keck School of Medicine’s commencement ceremony. The honor recognizes an individual or organization that has exhibited a steadfast commitment to supporting the medical school.

The same sort of mathematical model used to predict which websites people are most apt to visit is now showing promise in helping to map how lung cancer spreads in the human body.

USC research could lead to treatment for common lung diseases

A team led by USC researchers has identified a target in lung cells that may lead to new treatments for idiopathic pulmonary fibrosis, a progressive disease that ultimately robs a patient of the ability to breathe.

The center will focus on lung injury, repair and regeneration in an effort to discover new treatments and cures for pulmonary diseases.