An accomplished vocalist who plays jazz piano and guitar, Sierra Drummond suffered a misdiagnosed high school vocal injury that prevented her singing for her first three years at the USC Dornsife College of Letters, Arts and Sciences.

Determined not to let the injury curb her ability to share her love of music, in her junior year, Drummond joined KXSC, USC’s student-run college radio station. Then things began to turn around. A second — this time, correct — diagnosis, resulted in surgery, restoring her ability to sing in her senior year. After a semester of interning at KXSC, she landed her own two-hour weekly music show, naming it Wax and Gold after the Ethiopian tradition of layered meaning in poetry and song.

“In Ethiopian culture, ‘wax’ describes the obvious meaning of a song’s lyrics,” Drummond said, “while ‘gold’ refers to their deeper, hidden meaning, such as the social consciousness that helped inspire political uprising during the period of dictatorship in Ethiopia.”

For Drummond, who graduates on May 11 with a bachelor’s in NGOs and social change — an interdisciplinary major she describes as “a combination of sociology, political science, economics and international relations” — her eclectic and thoughtful radio show reflected the diverse scholarship she was engaging with in her degree.

As a high school senior, Drummond knew little about USC until she visited the campus with her father. She was so impressed that upon returning home to Thousand Oaks, she applied immediately. The news that she’d been offered a full tuition Trustee Scholarship — based on academic excellence, leadership and community service — made USC Dornsife an easy choice, she said.

“I was overwhelmed with how active and exciting it was,” Drummond said of her impressions of the college during her campus visit. “Everywhere I went, there was someone doing something different and interested in something different.”

Nevertheless, she didn’t expect life at USC Dornsife to turn out to be quite as full as it did.

“I found myself surrounded by so many different kinds of people from so many different walks of life. I’ve never had a dull moment, ever,” said Drummond, who is graduating with a minor in consumer behavior from the USC Marshall School of Business.

A central part of Drummond’s undergraduate experience has been her participation in USC Troy Camp, a nonprofit mentorship organization that provides after-school tutoring and programming and a summer camp for underserved youth in South Los Angeles.

The experience transformed her time at USC, she noted, giving her understanding and insight into the inner-city community around the university. “If I hadn’t done it, I wouldn’t have met so many wonderful families and built such incredible bonds with them,” she said.

Drummond also gave back by interning at a nonprofit in the heart of L.A.’s Skid Row during her senior year. She used the experience to write a 40-page thesis about how best to address the needs of homeless women.

“I wanted to write a thesis about women’s rights, and specifically the issue of sexual assault,” she said. “When I started getting really involved with homelessness, I realized how pervasive that issue is specifically in the homeless population and how little is being done to address it.” 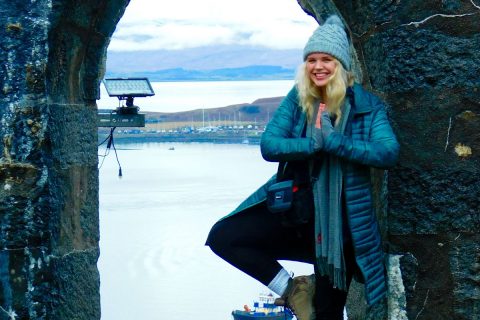 “I don’t think I ever could have expected how much USC would shape my interests and my passion for the roots of social conflict and a need for change,” she said. “Had I been anywhere else, I probably would have never decided to dedicate a year of my academics to really understanding it.”

Connecting to art and music in Scotland

Drummond also seized on the opportunity to study abroad, spending one semester of her junior year at Edinburgh University in Scotland.

There she found a renewed connection to art and music, took a sound-recording class, backpacked through the Highlands and visited the Isle of Skye. She now considers Edinburgh her favorite place in the world and Scotland her second home.

Drummond plans to continue working with public health concerns in Los Angeles. First, however, she wants to fulfill her childhood dream of joining the Peace Corps. If accepted, she plans to leave in November for Nepal. She feels confident she’ll be ready for the challenge. USC Dornsife’s unique opportunities to explore interdisciplinary studies meant that each semester plunged her into a new situation or a new academic focus, making her a very quick, adaptive learner, Drummond noted.
“That’s a great skill that will stand me in good stead for anything I choose to do,” she said, before adding with a laugh, “it’s kind of crazy to think that I didn’t initially plan on coming to USC, but I’m so happy I ended up here.”

Chemistry whiz Ryan Lopez wants to become the role model he never had growing up in South Los Angeles.

The collaborative event attended by civic officials and nonprofits highlights significant achievements over the past year.

Teachers must engage students in projects through songwriting, world music and more.