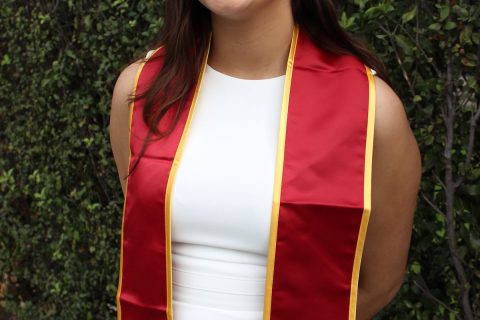 Glenda “Milly” Rodriguez is president of the Society of Hispanic Professional Engineers. (Photo/Courtesy of Milly Rodriguez)

When Glenda “Milly” Rodriguez promised her parents she would become the first in her family to go to college, she had only the vaguest sense of how to get from here to there.

As much as her Ecuadorian-born mother and Mexican-born father encouraged her academically, they could offer little practical advice to the future USC Viterbi School of Engineering student. Rodriguez’s peers in the heavily immigrant, lower-middle-class section of Modesto where she grew up were equally inexperienced in the ins and outs of higher education.

But through the nonprofit AVID, Rodriguez learned how to apply to college, obtain financial aid and even took a field trip to USC, which she “found sunny and beautiful and felt like home.”

Without the assistance of AVID — an organization that trains educators to prepare students, especially those underrepresented in higher education, for success in high school, college and careers — Rodriguez’s future might have turned out far less bright.

Today, the 22-year-old civil engineering senior interns at Pasadena-based Parsons Corp., an engineering firm, and is poised to graduate from USC Viterbi, making her the pride and joy of her large, extended family.

Rodriguez has never forgotten the importance of the guidance she received along the way. As president of USC’s chapter of the Society of Hispanic Professional Engineers, or SHPE — a national organization dedicated to empowering the Latino community through STEM awareness, access, support and development — Rodriguez has emphasized outreach to local schools, mentoring and networking to ensure that local SHPE members and area children, especially Latinos and African-Americans, have the same opportunities she did.

“All of us in SHPE agree what a privilege it is to attend USC,” Rodriguez said. “Therefore, it is important that we take advantage of that, that we build each other and our community up as we grow.”

Under her direction, SHPE-USC has grown in size, stature and influence. The organization has also shaped more lives than ever.

The USC chapter now has over 100 members, up from 80 when Rodriguez’s term began nearly one year ago. The group’s website has undergone a complete overhaul, including a new password protected members’ section for scholarship and internship opportunities. The average SHPE GPA has risen to a 3.5 from 3.3. Rodriguez partly attributes the upward trend to more members attending weekly study sessions, which became increasingly popular after the introduction of more peer-tutoring opportunities.

“Milly leads SHPE so incredibly well, and the students have so much respect for her,” said Brandi Jones, USC Viterbi’s vice dean for diversity and strategic initiatives. “She’s just on it.”

The senior chemical engineering major said Rodriguez has “moved the organization in the right direction.” Last year, for instance, Rodriguez landed several grants, including one from USC Viterbi, that allowed an additional 10 SHPE-USC members to attend the organization’s national conference in Kansas City.

At that “great networking event,” Hernandez received a job offer from Delta Airlines. He said he turned it down in favor of plans for graduate school.

“Milly really cares about everybody in SHPE,” Hernandez said. “She’s always connecting people and helping them grow personally and professionally. Plus, she’s really good at solving problems and delegating tasks.”

Of her many accomplishments as president of USC’s SHPE chapter, Rodriguez feels perhaps the most pride in establishing nearby August Hawkins High School as a SHPE Jr. Chapter after years of obstacles. Members of the chapter hold their own meetings and attend SHPE outreach events at USC.

SHPE-USC students also go to the high school to mentor the younger students as part of the SHPE SHAPE program. They share information about internships, college scholarships and about what engineers do.

“I feel like Milly’s having an impact not only on SHPE-USC, but SHPE national,” said Stephanie Mendoza Jimenez, a freshman mechanical engineering student and Rodriguez mentee. “She’s showing how it’s possible for other SHPE chapters to start junior chapters.”

Having personally benefited from AVID mentors only five years earlier, Rodriguez sees considerable value in reaching out to and inspiring the younger generation.

“I think it’s very important to help high school and middle school students have access to the same resources and support as more affluent schools,” she said. “If I can help any of these kids realize their dreams, I will.”

Reflecting her pride in her Hispanic heritage, she also belongs to the USC chapter of Hermanas Unidas, which empowers Latinas and other women of color in a higher-education setting.

When Rodriguez crosses the stage and receives her bachelor’s degree in May, she will think of her loved ones, but especially her late father who passed away when she was 14.

“I’ve invited everybody to my graduation, all of my uncles and my aunts, all of my cousins. Obviously, my mother, brothers and sister are coming down,” Rodriguez said. “I promised my dad I would graduate from college, and now I’m doing it.”

USC leaders speak to students about the opportunities available to them.

Inspiring first-generation student navigates college, keeps promise she made to her parents