Cecilia Wu was mugged after leaving church on a Sunday morning in 2006.

When she hit the ground, she broke her right clavicle. She lived with nagging shoulder pain for years and assumed it was from the fracture. But it just kept getting worse.

“A couple of years ago, the pain became unbearable,” said Wu, who recently turned 70.

In 2016, Wu underwent a round of rehab for the shoulder pain at Casa Colina Hospital in Pomona, but the treatment only agitated her injury. A series of scans later revealed a full-thickness rotator cuff tear.

Wu contacted orthopedic surgeons to research options to fix the tear: One recommended surgery, which would involve a painful recovery, while another prescribed a topical anti-inflammatory to possibly ease her pain.

Instead, Wu opted to participate in a pilot study of a potential treatment at the Clinical Biomechanics Orthopedics and Sports Outcome Research Lab in the USC Division of Biokinesiology and Physical Therapy.

Funded by a $463,000 donation from Barbara Fried, who experienced a similar injury, the lab conducts revolutionary research for patients with full-thickness rotator cuff tears. 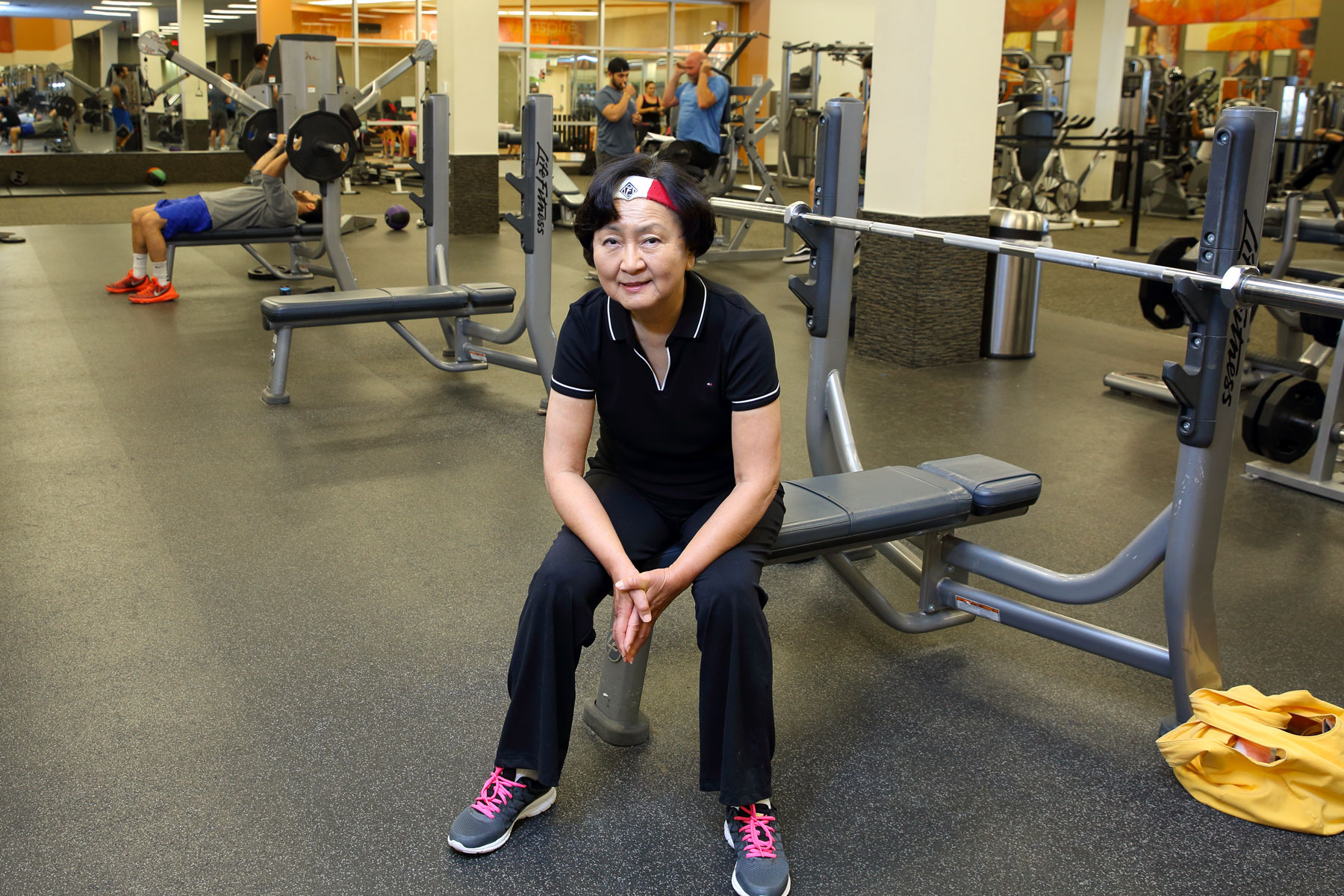 Wu’s new therapy regimen included exercises that are not typically assigned to patients with a rotator cuff injury but were effective in helping her to regain strength. (Photo/Glenn Marzano)

Rehab for this type of injury typically involves non-weight bearing, open-chain exercises. Patients might hold a band and rotate their arm.

USC’s research protocol involves what are called closed-chain exercises. Often these exercises rely on a patient’s own body weight — including push-ups, pull-ups, dips and reverse rows — while the end of the limb is braced.

“It’s a not a new type of exercise, but it’s new as it applies to people with full-thickness rotator cuff tears,” said Lori Michener, lab director and professor of clinical physical therapy. “Our idea was that using this approach would facilitate less pain for the patient and better muscle activation.”

This treatment is “unheard of” for this type of injury, said Jonathan Sum, assistant professor of clinical physical therapy. “To my knowledge, there have only been one or two studies looking at the efficacy of doing these traditionally more difficult exercises,” he added.

In phase one, patients go through the study’s exercise protocol as part of their comprehensive physical therapy treatment, which could entail other interventions based on the injury. In the second phase, patients progress to a gym program with intermittent supervision.

In the summer of 2016, Wu started the study’s first phase, undergoing 30-minute therapy sessions twice a week for 12 weeks.

“When we started, she had difficulty raising her arm, lifting anything, and she wasn’t able to exercise,” said Sum, Wu’s primary physical therapist. “One of her big goals was to sleep through the night.”

Now in the second phase of rehab, Wu said her shoulder has completely recovered.

Before therapy, I couldn’t even wash my back in the shower. Now I forget I’ve ever had an injury.

“Before therapy, I couldn’t even wash my back in the shower. Now I forget I’ve ever had an injury,” she said. “I exercise; I do Zumba. The only reason I’m not playing tennis is because I can’t find a group to take me — I’m not that good.”

The study, which started with 15 participants in 2015, has shown improvement in patients’ function and pain “dramatically,” Sum said.

“I can’t think of a patient who didn’t show improvement,” he continued. “In my opinion, this is one of these game-changers that could alter the standard of care for people with full-thickness rotator cuff tears.”

Surgery is often the protocol for this injury, which becomes more common as people age.

“By the time you reach 70, there’s a 50- to 70-percent chance you have some degree of full-thickness rotator cuff tear,” Michener said.

Through the work at USC, Michener hopes more patients can recover using physical therapy rather than an operation.

“Many people who have surgery end up tearing their cuff again for a whole host of reasons,” she explained. “Some statistics are as high as 50 percent; others are as low as 15 percent, depending on the injury and the procedure.”

This new approach could provide clinicians, including physical therapists and surgeons, with a surgery alternative.

Your own physical therapy team

“If we can prolong someone’s natural anatomy as long as possible, they’ll do better overall,” Sum said. “We want patients to have an alternative to surgery that returns them to better function and pain control.”

Michener and her team continue to examine the outcome of these exercises and are applying for a grant to investigate the short- and long-term impacts of the protocol.

Wu wants to spread the message to other patients with shoulder pain due to a rotator cuff tear.

“This is a very good alternative to surgery and the painful recovery,” she said. “The coaching atmosphere made it feel like you had your own team. I saw that I was improving, and that made me actually want to go to therapy.”

Online students in the new program DPT@USC will take the same courses as Trojans on campus — but in a different format.

Trojan’s nonprofit gives coaches the knowledge needed to maximize performance — at no cost.