Brandon Blaylock knew from an early age that he was adopted or, as his beloved parents put it, “chosen.” As long as they were alive, he had little desire to dig into his roots. But after his adoptive mother died in 2004 and his father four years later, Blaylock, 60, grew increasingly curious.

At the behest of his daughters, Kelly, 23, and Courtney, 21, a senior at the USC Viterbi School of Engineering, Blaylock joined Ancestry.com and submitted a DNA sample. 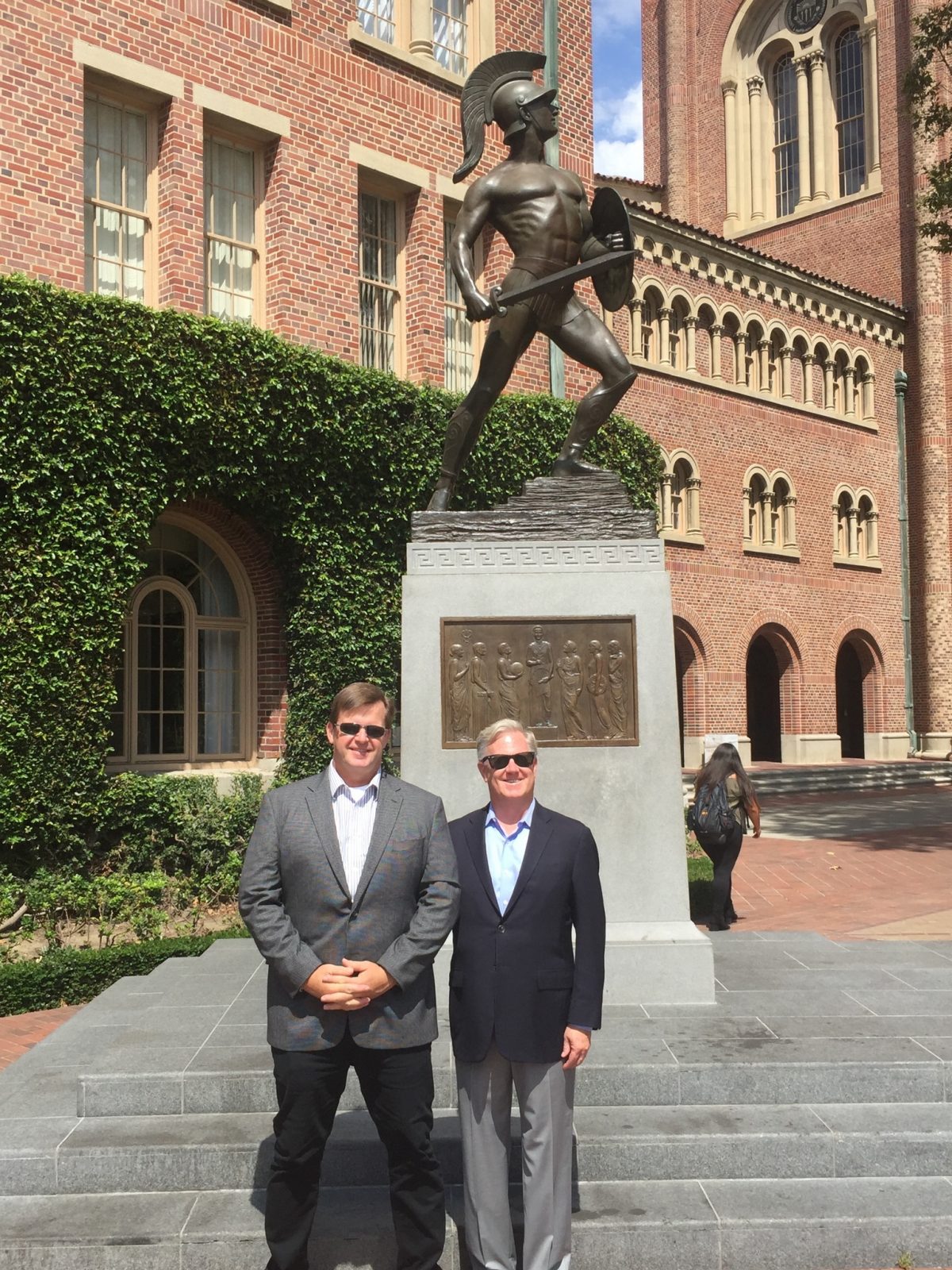 “They were afraid they’d end up dating one of their cousins,” he said with a laugh.

Jeff Adams had joined Ancestry.com a few years before, after suspecting that the man who raised him as his son wasn’t his biological father. Through the online genealogy company, Adams, another USC Viterbi alumnus, discovered and reunited with two half-sisters and scores of uncles, cousins and other relatives. The subsequent reunions had gone well, but Adams, now 54, wondered if he’d ever find the “lost older brother” his new family spoke about.

On a hunt for the past — and it’s all relative

On July 22, 2017, Blaylock and his daughters logged onto Ancestry.com to hunt for his past.

They saw a “Close Family” match that particularly intrigued them: a picture of a man wearing an ’SC hat who looked like a younger version of Blaylock. He immediately sent the stranger a message.

Adams received the missive the following day. Seeing Blaylock’s LinkedIn profile picture, he too was struck by their physical resemblance. Texts and a call via Skype quickly followed. Within hours, the pair realized they shared the same biological father. Incredibly, both had earned engineering degrees at USC Viterbi — and even overlapped years on campus.

“I really feel that I lucked out by having Jeff as my brother, and that I lucked out that he’s a Trojan and went to Viterbi,” Blaylock said. “What would have happened if he had gone to Notre Dame? We probably wouldn’t be talking.”

Together again — for the first time

Within a week of connecting, Blaylock and Adams met in person in Manhattan Beach, near where Adams and their sisters grew up. Blaylock traveled from his home in San Diego, while Adams made his way from Half Moon Bay. Joining them later that evening at the joyous family reunion were sisters Beth Sossaman, 53, and Julie Rogan, 57, whom Adams had found via DNA tests two years earlier.

Blaylock and Adams took an immediate liking to one another, sharing an interest in vintage cars, especially Corvettes, a love of family and an unshakable belief in personal integrity. In many ways, their personalities and personas mirrored one another’s.

“I am so fortunate that Brandon is such a great person — upstanding, ethical and hard-working,” Adams said. “He’s the long-lost older brother I never had. With Brandon and our sisters, I finally look like somebody besides my kids.”

For Blaylock, discovering a younger brother and two sisters on his biological father’s side of the family, along with recently meeting his biological mother — with whom he’s become quite close — and finding another brother, 54-year-old Jamie Lyle, on his mother’s side, has forever changed his life.

Gone from Blaylock’s bucket list are a lot of fancy trips and expensive material goods. In are spending time with his growing family.

“I want to get to know them better and make up for lost time — the last 60 years,” said Blaylock.

Blaylock grew up in a loving San Diego family of four. His younger brother, Clay, died of Guillain-Barre syndrome while studying at Columbia University, and Clay’s death left a gaping hole that has only recently begun to heal, he said. Blaylock, after flourishing at USC, climbed the corporate ladder, including stints as CEO of Airmall Inc. and CEO of GE Transportation Finance. He currently is a managing partner at Faros, a private equity firm he co-founded.

Adams, an academic and football standout, grew up in Torrance. He was recruited to play football at Harvard University but decided instead on USC, which at the time had the fifth-ranked electrical engineering program in the country.

“I was tired of throwing people down on the football field,” he said.

After graduating, Adams landed positions at TRW and founded several startups. He now works as a senior member of the sales team at SAP.

They love their USC football

Both are passionate about USC, and last fall they attended the USC-Stanford football game together, cheering on their beloved Trojans to victory. Adams belongs to the Viterbi Innovation Partners program. Blaylock serves as a USC Ambassador and is an advisory board member for the Sonny Astani Department of Civil and Environmental Engineering.

Blaylock’s daughter, Courtney, will graduate from USC this spring, while his wife, Janet, and her entire family are Trojans. Adams’ other brother, Jarrod, also graduated from USC, and Adams’ daughter, Sarah, 19, and son Nick, 22, hope to transfer to Troy.

“USC Viterbi offered me the opportunity to hone my technical, interpersonal and social skills,” said Blaylock, who is funding a scholarship at USC. “The training I acquired both inside and outside the classroom set me up for success in business and in life.”

Using it like a mantra, USC punter Kyle Negrete is fond of saying, “Don’t doubt the down and out.”

How to stay sane: Give emotional support to friends and family, but let them help you, too

An imbalance in social support — whether someone provides more than they receive or vice versa — is associated with worse psychological health, according to a USC study.

Two long-lost brothers, both USC Viterbi alumni, find each other — and a part of themselves