A gift from USC Trustee Shelly Nemirovsky and her husband, Ofer, has created an endowed chair for the university’s provost.

As USC’s second-ranking official, the provost is responsible for ensuring excellence in teaching, research and academics across the university. The new endowment, titled the Shelly and Ofer Nemirovsky Provost’s Chair, will provide recognition and support for this critical role, currently held by neuroscientist Michael Quick. 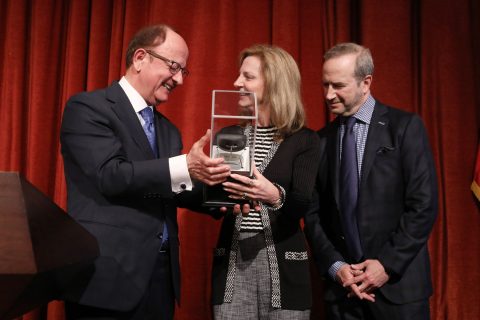 “Shelly and Ofer Nemirovsky are extraordinary friends to USC, and their steadfast support reflects their recognition of the value of exceptional scholarship and forward-thinking leadership,” USC President C. L. Max Nikias said. “The Nemirovskys’ incredibly generous gift to endow our provost’s chair will ensure USC can attract and retain highly talented academic leaders for generations to come. We are all deeply grateful for their visionary philanthropy.”

In his position as provost and senior vice president for academic affairs, Quick oversees all academic programs and support services, faculty affairs and academic planning at USC. He is also responsible for collaborating with other university leaders on wide-ranging issues, from fundraising to the management of USC’s health services.

“It feels like such a privilege and honor not only to be associated with the position of provost, but also to have Michael as the inaugural chair holder,” Shelly Nemirovsky said. “He is just unbelievable — he is brilliant and has this irreverent sense of humor. We all wish he could stay forever.”

Since assuming his current role in April 2015, Quick has emphasized diversity, equity and access. He has helped shape the university’s focus on issues such as homelessness, healthy aging, immigration, Alzheimer’s disease, security and sustainability. 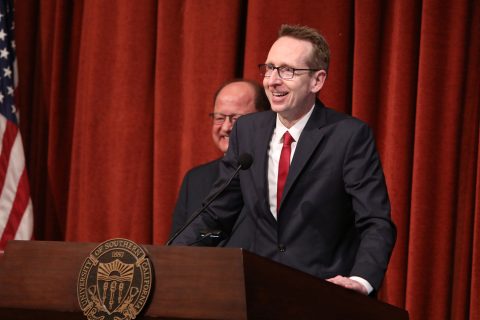 Quick earned his doctorate in neuroscience from Emory University and completed a postdoctoral research fellowship at the California Institute of Technology. Before coming to USC in 2002, he served on the faculty of the University of Alabama at Birmingham. His scholarship focuses on how therapeutic drugs and drugs of abuse alter the signaling properties of nerve cells.

This gift will allow us to support our stellar faculty, continue our focus on diversity and inclusion, inspire our students with great teaching and programs, and make a difference here in Southern California and around the globe.

“I am honored to be the inaugural holder of the Shelly and Ofer Nemirovsky Provost’s Chair,” he said. “This chair symbolizes the academic mission of the university and will support, in perpetuity, the strategic goals and academic priorities of USC. With our new strategic plan guiding our way, we will become an even more dynamic university. This gift will allow us to support our stellar faculty, continue our focus on diversity and inclusion, inspire our students with great teaching and programs, and make a difference here in Southern California and around the globe.”

Shelly Nemirovsky said she and her husband have been particularly impressed with the university’s ability to continue attracting outstanding students and high-caliber faculty members. More students applied for admission to USC this year than ever before, and average GPA and test scores continued to climb. 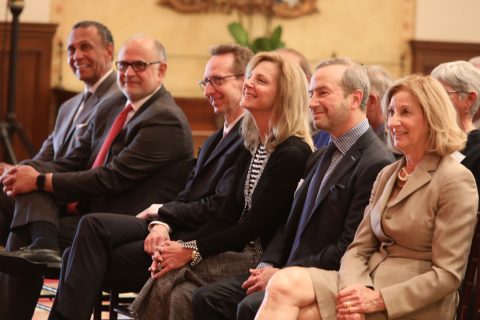 The Nemirovskys have also endowed and named a residential college at USC and say they are proud of the university’s ability to attract top talent. (USC Photo/Steve Cohn)

“We look at these scholars coming in and of course we want them to be bright and hungry for success,” she said. “But we don’t just look at test scores. We look at their whole background. This university has become so competitive, and still Michael and the rest of the administration have figured out how to attract the best talent inside and outside of the classroom.”

Shelly Nemirovsky earned her bachelor’s degree in English from USC in 1985. She has served as a USC trustee since 2016. The Nemirovskys also endowed and named a residential college at USC Village; the new Shelly and Ofer Nemirovsky Residential College opened in 2017.

After completing her education, Shelly Nemirovsky moved to the East Coast and worked in financial services before pausing her career to start a family. In recent years, she dedicated time to Buckingham Browne & Nichols, her children’s Boston-area school. She helped lead its $69 million fundraising campaign and served as vice chair of its board. She also embraced various roles with nonprofit groups, including Hill House, the Institute of Contemporary Art and the Esplanade Association.

Ofer Nemirovsky holds bachelor’s degrees in electrical engineering and finance from the University of Pennsylvania. He later earned his MBA from Harvard Business School. After joining the private equity firm HarbourVest in 1986, he rose through the ranks to become managing director, a position he held until 2014. In 2015, he became a senior adviser to the firm. He has served on the boards of the National Venture Capital Association, the Institute of Contemporary Art and the African Wildlife Foundation.

Nemirovsky Residential College will be a vital hub for academic, cultural and recreational activities on campus.

Devoted to educational causes, the USC alumna serves as a fundraiser in her hometown of Boston.

✌ Year in review: Donors invested in the university’s research, students and facilities through gifts to the Campaign for USC.

Guests from politicians to philanthropists share in an evening of fun and fireworks to mark the massive project’s completion and show continued support for the university.