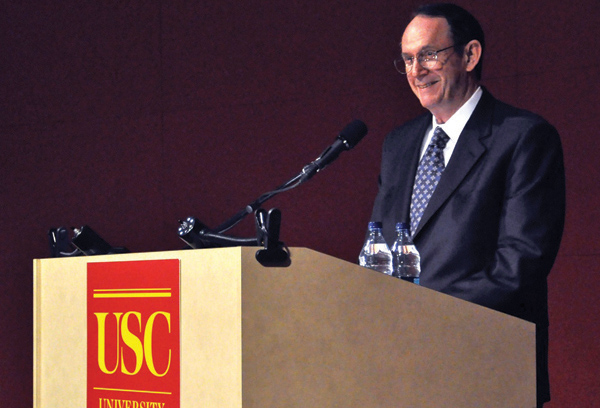 USC President Steven B. Sample delivers his annual Address to the Faculty.

The Health Sciences Campus entered a new era on Feb. 10, marked by an agreement to purchase two hospitals—and the impeccably timed annual Address to the Faculty by USC President Steven B. Sample, which celebrated the news.

Sample addressed the standing-room only crowd in the Aresty Conference Center by asking, “So, is it a great day to be a Trojan, or what?!”

The excitement in the room was palpable as he hailed the planned acquisition of USC University Hospital and USC Norris Cancer Hospital this spring as a “tremendous victory for the entire University of Southern California.

“After spending literally thousands of man hours analyzing this deal from every conceivable angle, the Trustees and Officers of USC believe it very much to be in the university’s best interest to make this purchase at this time,” said Sample, underscoring the weight of the decision.

He acknowledged that the process has not been easy and has been a complex and expensive undertaking, especially at a time when financial risks may leave an institution particularly vulnerable. However, Sample countered that the greater risk would be to not invest in such an important opportunity to advance clinical programs.

“The purchase of these two hospitals has far-reaching, positive implications for the entire university. What this purchase means is that we are establishing a USC academic medical center,” he explained. “One of the most important aspects of this change will be the opportunity to build stronger bridges between our Health Sciences Campus and our University Park Campus. We will be able to establish deeper connections among various disciplines in order to enhance research, teaching and patient care. The entire university will benefit from these purchases.”

Sample pointed out that the location of USC in the capital of the Pacific Rim provides an extraordinary opportunity. The new full-service academic medical center will become only the second of its kind in the entire greater Los Angeles region.

“This is our new frontier,” he said. “My hope is that we embrace this historic opportunity with enthusiasm, creativity, insight and foresight.”

In keeping with the tradition of his annual address, Sample also outlined the university’s accomplishments over the past few years and vision for the future.

He stated that in his 18 years as president, he has seen USC progress further and faster than any other university in America. He pinpointed major accomplishments in capital construction, faculty recruitment and research, quality of students, master plan developments, and charitable donations and endowments.

Despite the growing fears over economic turmoil, Sample said he remains optimistic.

He told the crowd of faculty and staff that the university must look at the next few months with prudence and pragmatism, but that he believes USC is better prepared to address current financial concerns than many of its competitors.

Sample explained that unlike many universities, USC relies much less on endowments for revenue and more so on tuition.

He pointed out that applications for the fall semester are holding steady and that any cost-saving measures, such as the staff hiring freeze, are preventive at this time.

“This is a very important moment,” he concluded. “We need to redouble our efforts, so that one of the darkest days in American economic history will be remembered as a bright and shining moment in the history of USC.”

USC President Steven B. Sample sums up annual address: ‘A great day to be a Trojan!’