Dental cavities are the leading source of disability and pain: They affect 35 percent of the world’s population, with an economic impact in the hundreds of billions of dollars. Still, the methods for treating cavities and tooth enamel loss generally involve pain, cost — and drills. 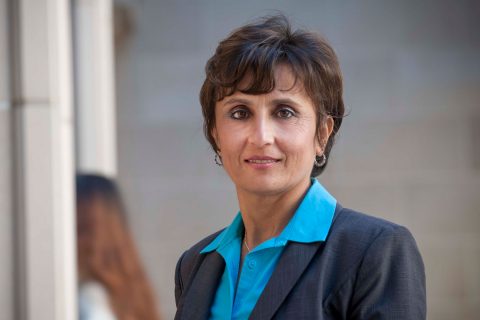 Janet Moradian-Oldak, a professor at the Herman Ostrow School of Dentistry of USC, has been studying how to coax tooth enamel to regenerate on its own for decades.

The problem is so complex, she said, because enamel — one of three hard tissues that make up teeth — is unique. The cells that create enamel die after it’s produced, so it doesn’t regenerate on its own.

“It’s not like bone,” said Moradian-Oldak, a researcher at the Ostrow School’s Center for Craniofacial Molecular Biology. “With bone, there is constant remodeling and regeneration.”

Moradian-Oldak started with an idea: If she could understand how cells make enamel in nature, it could be possible to replicate the process in the lab without cells. She soon found the process was much more difficult than what she envisioned. Translating research from the lab to the clinic and regulatory process, in particular, has proved challenging. 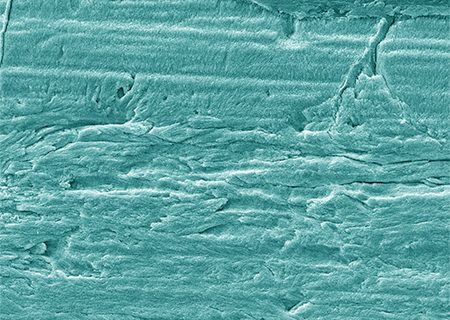 So she decided to take a slightly different tack: Instead of mimicking the entire natural process, she’d just work on the part of enamel formation with the most impact.

Moradian-Oldak and her team engineered a string of amino acids that contained only the parts needed for enamel crystal creation. Over seven days, the shorter peptide grew synthetic aprismatic enamel that was two times harder than the softened control enamel. Moradian-Oldak reported the results of the study in a paper recently published in the journal ACS Omega.

Painting instead of drilling

The shorter peptide has a few benefits over a longer one: It’s less expensive, and the path to getting this approved by the U.S. Food and Drug Administration would be simpler. The study was a proof of concept, but eventually the peptides could be incorporated into a gel. Such a product could be painted on teeth eroded by early cavities or erosion causing pain and tooth hypersensitivity, effectively replacing lost enamel.

Lots of variation happens in the depths of peoples’ mouths. In the lab, Moradian-Oldak studied the effects of controlled, artificial saliva on the synthetic enamel. The saliva trapped minerals like calcium and phosphate. She notes that in life, saliva has many other components like antibodies and proteins — another challenge.

The work is still in its early days, and clinical trials are years away, but it’s still exciting, she said.

A new mantra for dentists

Kaushik Mukherjee, a fourth-year doctoral student in Moradian-Oldak’s lab working on the project, explains that the current strategies for treating early cavities have shortcomings: They don’t have the same composition as tooth enamel. “Because we are focusing on growing bioinspired synthetic enamel, the structure is durable,” he said.

There is a huge push in dentistry to be as minimally invasive as possible, Mukherjee explained — something that will come as welcome news to patients who clench their muscles when they hear a dental drill.

When treated early, conservative dentistry can help patients restore their teeth to health. That benefits everyone: As cavities go deeper, the cost of treatment gets higher.

“The new mantra in dentistry is filling without drilling,” Mukherjee said.

How to eliminate pain tied to tooth decay

The genetics of surrounding teeth do not necessarily predict how successful a jawbone graft will be — disputing what dentists and oral surgeons have thought about jaw grafts, according to a clinical study from the USC School of Dentistry.

Tooth enamel has remarkable resistance to wear and tear that isn’t quite matched by materials currently used for dental repair and restoration, but researchers at the USC School of Dentistry’s Center for Craniofacial Molecular Biology have taken a promising step toward one day recreating natural enamel on tooth surfaces.

Study Indicates Dentin May Not Be Needed for Enamel Formation

A study led by Yang Chai of the Herman Ostrow School of Dentistry of USC and published in the April 2011 issue of Development had some surprising results that appear to challenge long-held ideas about normal tooth development.